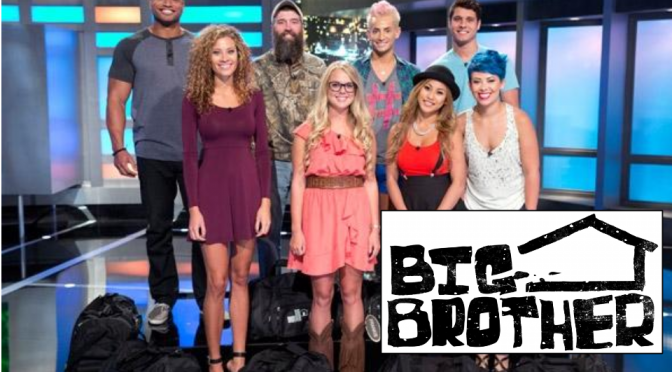 Everyone!  It’s back!  Big Brother is back!  And guess what?  It didn’t devolve into absolute ugly chaos and bullshit the first episode!  I know, me too!  I’m just as surprised as anyone that we didn’t immediately get a house full of paranoia after just a few hours – sure there was some paranoia but it didn’t turn into the Aaryn-Jeremy coolkids alliance thing like last season immediately did.  I’ve got lots of opinions about this first episode, so I’ll try to handle them in an organized fashion.

Okay, how is anyone supposed to focus on the gameplay elements of Big Brother when this ridiculously cute and hot mofo is walking around the house?  GEEZUS. ÂEvery time he showed up on-screen, Larry and I both were just like, ‘daaaayyyuuummmmm’.  Please don’t leave early, Cody.  Please.

Alright, now that most important piece of business has been dealt with, let’s talk about the other stuff.  I actually liked only getting to meet half of the cast in this first episode.  It was much MUCH easier to remember and get to know who was who, as usually in that first episode, it’s such a shit show you just don’t know what is going on.  Actually spending time with the houseguests like this helped me to remember their names, even after just one episode.  So yay!

Here’s my thoughts on the 8 houseguests we’ve met so far:

A NYC DJ who already is starting to grate on the nerves.  She and Cody are also getting their flirt on in this first episode, but I can’t blame her for that now can I?  She’s heavily campaigning for a girls’ alliance, so perhaps she’s actually playing the game too!

He seems nice enough, but in his clips from home, I was a little worried as he seems a little slow.  I like that he’s self-deprecating though and he could become a great commentator about the game at large.  He’s drawn to Nicole due to their small-town similarities.

I think we already know how I feel about Cody.  He is not allowed to leave the house, AND I do believe he is required to be shirtless at all times.  Them’s the rules, Cody.   I don’t think he’s the brightest bulb in the bunch though, so he may need some help in a good alliance, and Paola may possibly be a good first step.  We’ll see.

Ariana Grande’s brother; Larry had no idea who that was, and I think most people over 25 are in the same boat.  He’s actually showing himself to be savvy to the game though, even if his first impression can be a bit much. Seems to be a bond between him and Joey; also, he’s not blind as he’s lusting after Cody like anyone sane would.

An athletic and outgoing self-proclaimed tomboy, I think Amber has the potential to go pretty far. She can probably get into a pretty-people clique just to use them to get ahead.  She wisely (?) threw the HoH comp to Frankie at the end, so I’m intrigued by her.  She’s drawn to Devin’s hotness so she’s definitely not a robot.

She’s got a weird Aaryn/Jordan mix of personality and appearance going on.  She’s very down to earth but I swear when she took off the glasses, she looked just like Aaryn.  She’s fairly under-the-radar at this point though.

Another really attractive guy, but unlike Cody, this guy is HUGE.  He’s also really down to earth and looks to be wanting to play the game, as he was one of the first to propose an alliance of 8 and then also secure a sub-alliance with an unlikely ally.  Let’s just see if he can play in a way that doesn’t send up red flags for the others.  He’s attracted to Joey at the moment; sorry Amber!

She’s got personality for days.  While her home intro was a bit much even for me (“I’m super liberal and want a liberal boyfriend showmance!”), she looks to be acclimating well in the house, immediately bonding with Frankie over their shared fabulousness and different hair colors.

So that’s the first 8 houseguests. They ended up getting the house to themselves this entire first episode, which allowed them to pick beds first and establish these relationships without having the distraction of an additional 8 people. Their resulting alliance scrambles looked like this after today, and I plan on tracking these relationships as the show progresses just to see how they will of course flame out and rebuild: 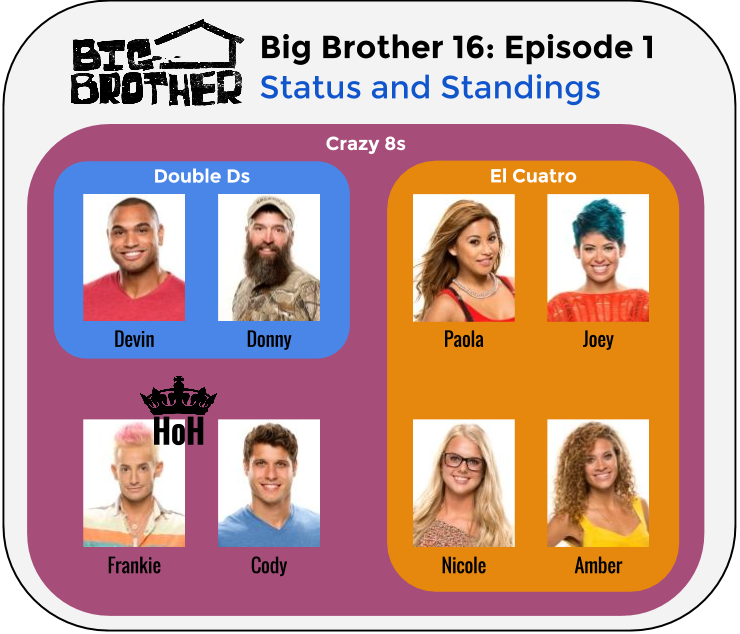 As you can see, 3 alliances formed:

Poor Cody is all alone out there, waiting to be part of something, anything.  I’m guessing eventually a Cute Boy alliance will evolve, once the other guys arrive in the house.  At least he got to play in the Crunch Contest! 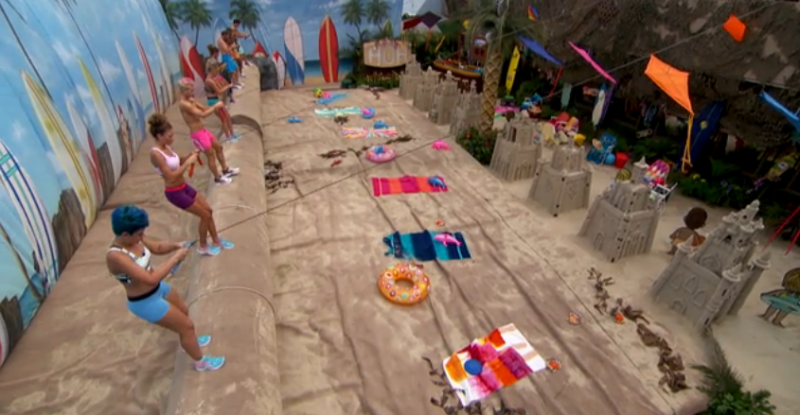 The first Head of Household competition was held with just the 8 houseguests.  It was one of those where they had to stay up on a rolling cylinder – and it was pretty rote for BB, but when they started pouring “sunscreen” on them, it was like, really, who’s designing these challenges and are they reading my mind?  In the end it came down to Frankie vs. Amber, and Amber wagered that winning HoH, especially after Julie warned them that the HoH power was changing, was not really “winning”, so she dropped. Frankie is our first HoH! …..for now.

The first twist happened immediately as I’ve talked about at length already, in that only 8 houseguests were let in.  It’s not clear how long they are going to be alone, but I’m guessing it’s just for a few hours.

The second twist seems to be that the Head of Household power has changed drastically…at least for now.  Julie mentions that while the HoH does get their own bedroom, they are no longer safe from eviction.  It’s not entirely clear what that means, but my guess is that while the HoH gets to nominate 2 houseguests for eviction, the Power of Veto replacement nominee is no longer made by the HoH.  I’m not sure who it will be, but I’d guess the Veto Winner gets to do that now too.

And the final twist of the evening is that there will be a 2nd Head of Household that will come from the other group of 8.  And only 1 HoH will be left standing by the end of the week. A lot of vagueish words there….will be fun to see how that all plays out, and luckily we only have to wait till tonight!

I used to put all this stuff up top, but maybe it’s time to keep the suspense going and put it at the bottom!

Who Won Head of Household? Frankie

Nothing else to report as of now!