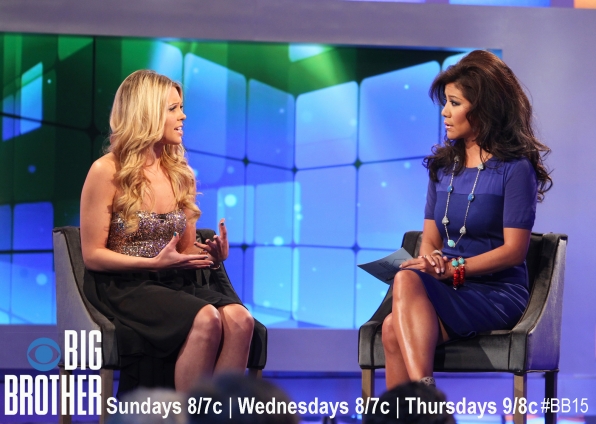 Ouch. Â Just ouch. Â Aaryn’s eviction seemed to be pretty certain especially after the first few show segments revealed that Andy was doing a much better job in defending his case than Aaryn. Â There obviously could have been something that would have saved Aaryn that wasn’t shown, but yeah, when we saw those votes, even GinaMarie’s, evicting Aaryn, it was time to get ready for the hammer. Â After the month or two that’s passed since Aaryn’s REALLY racist tirades made the news, it seemed that she has actually been less repellent. Â It doesn’t excuse any of her behavior though so was it kind of awesome to see Julie Chen do a damn good job of giving Aaryn a reality check of what’s been shown thus far? Â Yes, yes it was. Â Also, I felt a little bad for Aaryn too, against my better judgement. Â She just got evicted and now she gets shamed on national TV. Â Double-whammy. Â  But you reap what you sow. Â I’m sure she went to the jury house and complained about what just happened, but I imagine the other jurors gave little to no shit about how Aaryn was feeling.

Apparently not much else of interest happened as they filled two segments of the show on Thursday with puff bullshit, first the “successful showmance” segment, the next with Dan’s thoughts on the show. Â Double ugh. Â I was amused to hear that Ian is “cordial” with Dan. Â Other than that, who gives a rat’s ass about Dan? Â I HATE the way he talks. Â Anyway, we then got treated to the beginning, yet again, of this week’s HoH competition. Â From the looks of it, GinaMarie was taking the early lead. Â If that holds, that would be very bad for Amanda & McCrae. Â I wouldn’t count them out though as GM isn’t the brightest bulb and could probably be manipulated into nominating herself for eviction. Â So I guess we’ll see. Â But I’m pretty sure if neither Amanda nor McCrae win HoH, they’re going up.