We came back to the hospital in the morning, bringing Michancy with us this time.  She had ended up staying home on Monday (day drinking, eating, Netflix watching).  When we got there, Larry’s levels were improving but it was still a struggle. He had a bit more lucidness but there was still a lot of confusion.  Mila and Sveta came out for the day as well.  Dr Weinberg was who was able to come and consult, and we learned what we basically knew what was coming – Larry’s not going to recover or continue his treatment.  He is going to die.  Within weeks.  It is not a surprise to hear these words, but to say that my heart didn’t get ripped out regardless would be a lie.  We spent a lot of time that day with him, rotating in the room as only 2 are allowed at a time in the ICU.  Mila brought bagels and nosh, Sveta brought Xanax, and it was time for us to grieve and cry in the waiting room.  I’m writing this from Thursday (the 26th), so I have a bit of a detachment from the day just because of time and the interim moments we’ve had, but it was a horrible day.  Dr Weinberg sent a recommendation for hospice care, and we started that process going.  It seems like that will be a wonderful comfort as they will take care of quite a lot.  He will not have pain, and he will be surrounded by love.  As the day progressed and his levels continued to stabilize, his awareness was better.  He did ask what Fran and I talked about with Dr Weinberg, and I had to tell the love of my life that he no longer had any options and we were going to go home to live out the rest of his days. I had to tell him he was going to die.

Mila and Sveta both left after 3-4 hours, but it was wonderful they were there.  Michancy remained as she’s staying with us, and she and I were able to be there for each other.  We did not have  anyone stay over that night as it just isn’t really a helpful thing.  So we all headed back to home that night, and we ate leftovers from our dinner the previous night that we ordered from a nearby-to-the-hospital Izzy’s Deli, which was chicken soup, a French dip sandwich, and other leftover food.  That night at home, the 4 of us sat at the dining table and looked through pictures and told stories, laughing and crying.  Michancy and I also drank far more wine than we should have – but it was cathartic.  Larry will never be forgotten and has had an impact in so many lives. 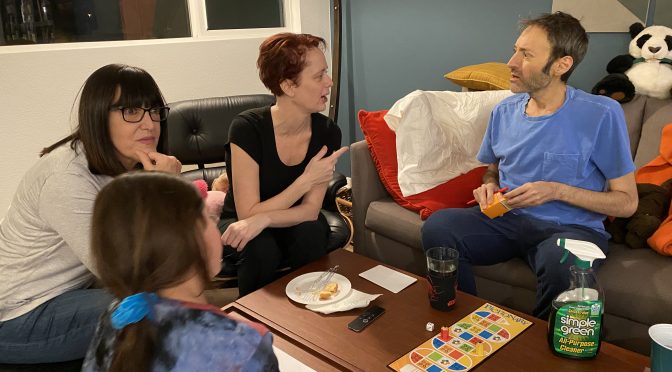 This was a fun day after Thanksgiving.  No Black Friday craziness.   Jon/Alyssa came over in the morning.   Michancy, Jon & I went to Target, a pot dispensary, and a wine store to stock up on stuff.   Then in the afternoon, we went to see Frozen 2 at the Universal AMC.   Larry and Michancy stayed back.   Frozen 2 was very fun.  The first Frozen is still probably the better of the two, but undeniably entertaining regardless.  In the evening, we played Pictionary, which Larry was able to enjoy too.  Drank a good amount of wine that night.