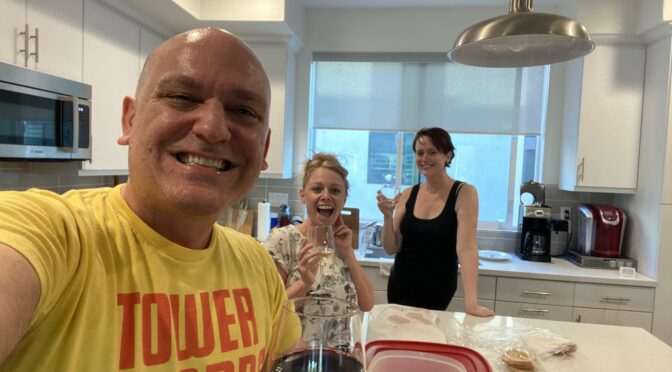 No doubt that this is a really hard time.   For me, for sure, but for everyone.   But yeah, I’ll say I’ve got a bit of an extra heaping of bullshit that can overwhelm me at times.   I had a bad Wednesday.  It was not good.  My friends helped me out of it.  I would like to say I’ll avoid getting into that mindset again, and I’ll certainly try – but that kind of feeling kind of is just hard to avoid 100% of the time.  Anyway, I guess that’s enough to let you know that I’m trying my best to keep going and I can do so because of my friends and certain parts of family.   Enough said I guess there.   I’m just going to post some fun pictures and tell some stories briefly about good things that have been going on, fun stuff I’ve been watching or playing, howza bout that?

Crossrope:  I added jumping rope to my exercise activities.   So in addition to my daily yoga (I’m up to 126 days straight! go me! Thanks Yoga with Adriene!) I now will either do some jump rope routine or I’ll do the Bodyboss band system.   Hopefully that’ll help in the long run.  I need the cardio and the strength training.

The Get Lean set – these jumpropes are awesome

The jump ropes are really good and assist in making it easier.  I had bought some junky Amazon rope and it was totally the wrong length and material.  Anyway, here comes my swimsuit body, lolololol.

2 weekends ago (June 14), I met up with my PwC friends and coworkers out at Valley Village park in North Hollywood.   We were nicely outdoors and socially distanced, and it was great to see people again.   It was a really wonderful day, perfect weather, and we got to celebrate Mel’s engagement from the day before!  It was the first time I’d been out to a social gathering of any kind since the lockdown.  Crazy.

While at the park above, Mel & Josh (her great fiance) brought a cool Bose portable speaker.   I was jealous and bought one online right then and there as my roofdeck needs something and the Beats Pill that Larry had got so long ago back in Silver Lake as a way to get that AT&T phone extender is getting gross and totally dead.  So, problem solved.  I highly highly recommend it if you’re in the market.  The sound is fantastic, bluetooth, etc.

Very exciting recently was Michancy came down last weekend (June 18-21)!   I’ve missed her so much and it worked out for her to drive down and we indulged in drinking everything, watching all of Picard, playing Ticket to Ride, drinking more, inviting Nicki over for rooftop fun and games, cooking wonderful meals (filet mignon on Friday night, and spaghetti carbonara the next even though I had basically passed out after daydrinking, managed to wake up and motivate myself as I knew the ingredients were there and goddamn it came out good), playing Just Dance and burning off alcohol, and overall, just having a fantastic time with BFFs while the world continues it’s march to destruction.  YAYYYYYYY.

Out on the deck jamming to tunes and talking

Game day with Ticket to Ride

After Michancy left on Sunday, I admit I think it was hard to come back down to reality and be alone again.  Maybe that was why my Wednesday was so hard?   Combination of reality check, my mom isn’t doing that great and keeps falling (I ended up buying a whole new bed after I had already bought her a whole new bed when moving her in March), and I really really miss Larry still.  I’d give anything to have him be here to get through all this with – whether it’s the pandemic, the issues with mom, my resentment of a lot of my family, the political nightmare that is our presidency…any one of those things would be enough to justify my alcohol consumption, but all of them at once?  And the fact i’m still grieving Larry and stuck alone for most of it?   It’s hard.   The good times pre- his final descent are what keep me smiling, but I can remember those last 3 months vividly and it wrecks me.  What he went through and to witness it.  It’s just fucking not fair and I fucking hate everything at times. Most times, really.

My friends talked me from the ledge Wednesday and on Thursday, as we had a nice zoom call and I can’t tell you how much I love them.   We’ll get through this all together.  I think Nicki probably recognized that maybe I might need some friendship and I recognize I do, so I invited her over this weekend to hang out, so we did.   It was a fun day and a half – we hung out and enjoyed the roof deck yesterday and I introduced her to the game of Mastermind, which is an old favorite my mom and I used to play way back in the day.  It’s a classic, and perfect for 2 players.  Then we watched two seasons of Search Party and damn, that show is something else.   It’s funny as hell and I love the characters, but it is a show that goes to some surprisingly dark places and there’s really no way it doesn’t continue to get darker.  The 3rd season is out now, so I guess we’ll be able to catch up.  We also watched a super fun movie on Netflix:

Eurovision, ABBA, Will Farrell, Rachel McAdams… hot Russian backup dancers and promises of even more great European songs?  I was in long before this came out, but holy shit, the final product is fantastic.   I really liked that it didn’t make fun of Eurovision – the original songs are like, really good.  Anyway, Jaja Ding Dong!

For dinner last night, we made Larry’s arroz con pollo recipe and it really is just a stupendous dish and it was nice to make that, hopefully with Larry smiling in satisfaction somewhere out there.

I introduced Nicki to Mastermind

Nicki’s pic of me conquering Mastermind

What else have I been watching or doing?