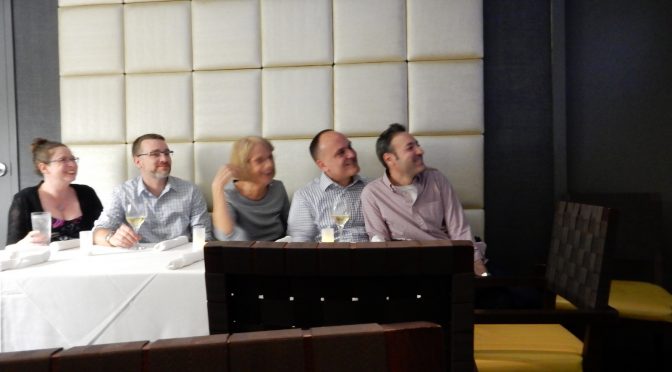 I took some time off from the website, as some of you may have noticed.  All that energy around getting the wedding event to be just perfect (well, at least to a close-to-perfect state) was exhausting.  Larry & I didn’t head off for a honeymoon or anything, we just basically went back to work.  We did both take off the Monday following the wedding weekend, and then Larry went back to work that Tuesday while I took that day off too.  Sure, I could have started posting then, but I decided videogames had to be played and things had to not be done.  🙂  Anyway, here we are.  I’m quite ambitious in what I want to post on this site, but I’m going to pace myself.  So what I think will happen is this:  I’m going to post pieces of the whole wedding thing in various posts, and eventually collect them into a sorted list of links on one master page.  It will serve as not only documentation of the whole bloody affair for our purposes of reminiscing, but also if someone stumbles upon this here site and is planning a wedding, they can see and maybe be inspired by what we did.  As I do want to reach back into pictures I’ve been taking all this time (the last 6 months) but was reluctant to publish on this site as I wanted to really have a lot of the event be a surprise for people.   So this post is a return to the site but it isn’t comprehensive by any means yet.  Small moves, Ellie, small moves.  BTW, we haven’t received our official photographer’s pictures from the wedding yet, so don’t worry and think you’re missing anything.  Let’s begin!

Larry’s mom, Fran, happily and blessedly took this event on for us, so it was one massive event that we didn’t have to directly deal with.  YAY.  It wasn’t without drama though – maybe not “drama” per se, but we had a few venues lined up which fell through for various reasons.  Our first restaurant that Fran found was a wonderful Italian restaurant in the Beverly Blvd/Grove area called Terroni.  It had a back room that was good for hosting groups and was even hidden behind a secret bookcase door.  Larry & I went with Brian & Nicki to go taste the menu and it really was fantastic…the only thing was that it only held about 30 people and that was definitely going to be too small for us.  But here’s us going there back in January!

Once it was clear that we needed a bigger space, Fran moved quickly and found a place even closer to the hotel where many of the out-of-town guests were going to stay, the Hotel Wilshire.

A Food Affair was a great French restaurant that also had a very cool back room perfect for hosting larger groups.  Larry & I went there to sample the delicious menu one night in February and had a great time – I also managed to finish the bottle of wine we brought by myself since Larry was still on alcohol lockdown.  I also lost the cool wine bottle tote that we had bought in San Francisco because you can’t trust drunk people with holding onto belongings.  They’re the worst.  So what happened?  Well, as I alluded to above, we brought wine with us as A Food Affair is a restaurant that lets you bring your own bottles and they’ll open it for you, charging a corkage fee I think.  Very New Jersey.  Well, they were a restaurant that could do that as all of a sudden in March, Fran got called by the restaurant as their license to do that was no longer valid.  No longer could you have alcohol there – and so that was a no-go for us.  I wonder if the place is still in business?  You can’t have French food without wine, just saying.  Anyway, here’s pictures from our journey there in February, including some shots of the back room.

The back room of A Food Affair

It would’ve been a great space for a rehearsal dinner

The front doors of the restaurant

So Fran was once again forced to find a new place, and in a Hail Mary, called the Hotel Wilshire.  Turns out, they were only too happy to help her out, and in fact let her know that their 2nd floor lounge area has made for a wonderful place to have gatherings.  Fran was sold, as were Larry & I.   It ended up definitely being all for the best, as for those of us who were staying at the fabulous Hotel Wilshire (More on that in a separate post), all you had to do was come down to the 2nd floor!

Larry & I had checked in just earlier that day.  We had expected to check in on Thursday night but due to having plenty more to do in terms of preparations, we delayed.  I’ll get into the “Road to the Hotel Wilshire” in another post too, but that certainly was eventful in itself!

The invite list for the Rehearsal Dinner was a much smaller subset of the wedding guest list, mainly for those who had traveled in from out of town.  I’m so glad we had this opportunity to meet up with everyone like this as certainly at the wedding, we certainly wouldn’t have had this kind of quality time.   So most of the east coast folk were there, as were my Dad & Pat, along with most of the wedding party, our Colorado Springs friends, as well as my Mom.  It was a good group!

The hotel set up that lounge area into a nice buffet with plenty of tables to sit at and meet up with people.  There was also a seemingly unending flow of wine, as I definitely partook in way too much.   Alright, let’s try to see if I can present the pictures from that night in some ordered manner:

On the Hotel Wilshire rooftop with Erin

With Mila up on the roofdeck

With Uncle Richard and Aunt Diane

The Hotel Wilshire roofdeck had an amazing vantage of the city

Sunset at the Hotel Wilshire

Watching Alyssa & Jon’s video for us

KD, Eric, Mom, me and Larry

The assembled crowd watching the video

With my besties, MIla & Sveta

Me with my mom

It was quite a night.  One particular part that made it extra special, besides of course seeing everyone there all in one place, was getting to watch Alyssa & Jon’s video that they made for us.  They weren’t going to be able to make it to the wedding as Alyssa is pregnant and too far along to travel that far.  They surprisingly made this very amazing video indicating what things I need to be ready for when marrying Larry.  It’s pretty stunning, and super cute when their daughter Stacey tells us “may the force be with you!”

Needless to say, this was one helluva way to get into the spirit of what that weekend was going to be all about.  I definitely drank a shitton of white wine, happily though I never wavered from white wine so my hangover the next morning was pretty minimal and easy to recover from.  What’s funny as I’m typing this is that I recall that Larry & I really didn’t spend much of this event together.  We had obviously been hanging out during the time leading up to it, but once we got down there, I ended up talking a whole lot with Larry’s cousins, CS friends, NY friends, my family and the wedding party, while Larry was working the other half of the room.  Divide & Conquer!

Okay, so yeah, the Rehearsal Dinner was a great success, thanks to Fran’s tireless efforts and the Hotel Wilshire putting on a great event.  It helped ease Larry & me into thinking this wedding might actually go off without a hitch, and spoiler alert, it pretty much did!  But more to come in further posts, which I promise to get out on at least a daily basis.  I don’t promise chronological order though.  🙂