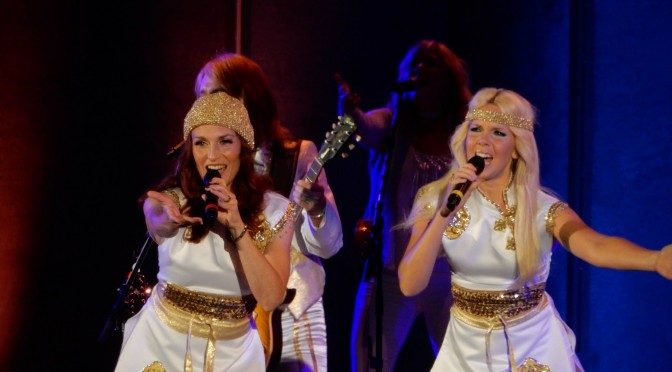 Our last concert of the Hollywood Bowl season!!!  So sad an occurrence, but it was a fantastic way to end it.  Anyone with a pulse knows ABBA is awesome, and as we discovered in 2013, this tribute band puts on an insanely amazing show.  They really are ABBA, at least as close as you can be when recreating ABBA at the height of their songwriting and performing powers.

Since I was in my lazy blogging state in 2013, it seems I never posted about the awesome ABBAFest concert we saw at the Hollywood Bowl back in 2013.  Basically, this group from Sweden looks and sounds pretty much exactly like all four members of ABBA and they tour the world putting on ABBA concerts.  They really go for it too, having the hair, accents, and costumes down perfectly.  They’ve also got charming concert banter and basically you’re just dancing during the entire concert with a great big smile on your face.  Unless you hate ABBA, and why would you?

Mom joined us for this concert as I knew back in 2013 that she’d love this show. The group skipped the Hollywood Bowl in 2014 so it was a happy day to see they were back this year – and it seemed they were taking the slot that normally The Sound of Music Sing-a-long occupies.

In 2013, the opening act was 3 different acapella groups from LA universities and hosted by the woman who was a brief internet sensation when she sang “For Good” with Kristin Chenoweth at her HB appearance and even nailed the harmonies.  So that was a cool experience.  In this year’s opening, we got the gay men’s chorus called Menalive, and they freakin’ nailed a great set of Elton John songs that had the crowd very entertained.

Getting to the Bowl

This was a fun group to have warm up for the ABBA show, and they sang the upbeat Elton John songs like “Saturday Night’s Alright for Fighting”, “I’m Still Standing”, and “The Bitch Is Back.”  They did a performance of “Candle in the Wind” that included a Marilyn Monroe lookalike dancing around with them.  There were a few cute guys performing their hearts out as you’ll see in the pics here.

The setlist for this night was just slightly different than it was in 2013, with a few songs shuffled around and some replaced for others.  My heart still was hoping to see them perform “Super Trouper” this year, but alas, they didn’t.  They didn’t in 2013 either.  The other awesome ABBA songs were though, as you can see: