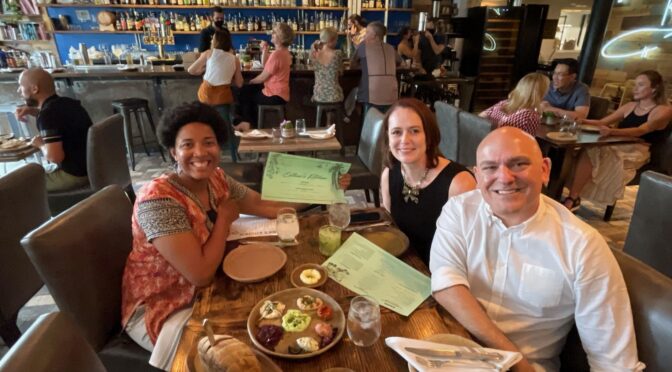 The first few weekends of August are ones I spent in the desert. Both were nice chances to get out of the house and have what felt like normal times, even though we absolutely are not living in normal times.

First up, Vegas! It had been just under 2 years since the last trip we took all together, including Larry, as a group of friends. I had managed to wrangle up that group back then because I knew Larry was going to be having that massive surgery back at NYC and, I guess my gut was telling me you need to do this. That was a spectacular weekend back in August 2019, and I’m glad that Larry was able to have that kind of an outing before it all got really difficult. In that trip, there was 6 of us going and then of course meeting up with Michancy.

Anyway, I’ve been missing Vegas. I am certainly my mother’s son and gambling is in my blood. So, I just finally wanted to go again. It probably wasn’t the wisest time to go with Delta variant coming on strong, but I still just wanted to go. One thing I had to do was disperse some of mom’s ashes, so that was another reason for me to go. I’m not going to drive all that way to just turn around and come home.

I booked a swanky room at the Cosmopolitan (Larry & I had stayed there when we met up with Jon & Alyssa in Vegas in 2015 and loved it). I wasn’t sure if anyone else would be up for going, but I reached out to Maj as she’s truly the only other in the friend group who likes gambling as much as I do. Turns out she was able to go so that was the group! Small but fun.

Here’s where mom’s ashes are – they are where Harv’s ashes are too, so I’m hoping this helped with her spirit.

I had decided to make this a 3-day weekend, so I left Thursday afternoon. I got to Halloran Summit around 3:30pm, and that left about another hour before I pulled into the Cosmopolitan. Even though Vegas is not a ghost town, it’s still noticeably less crowded than if I had gone two years ago, even on Thursday. Which I’m completely fine with, as I hate when it’s overly crowded, especially with covid.

The room and the view were amazing. I decided to pay good $$ for this trip, so yeah, you get a pretty great view and room. Maj had made it right around the same time as me, but she stayed at the Tropicana, which is a bit away but still sort of walkable. She made it up and we had some drinks at the Chandelier Bar first and caught up. We then took an Uber downtown to where Michancy was waiting for us at this really cool sushi restaurant. It’s the Arts district there, and it was a nice way to do things as it’s otherwise very hard to get reservations at a lot of places spur of the moment. I also got to meet Michancy’s sister, Nova, and it was just a great night to start things off. Michancy dropped Maj and I back off at the Tropicana and we walked over to New York New York as that had the more fun casino. And we had a really great time at the blackjack table! That was my only good time with blackjack that entire trip! Happily, at midnight on Thursday, Nevada instituted a mask mandate indoors, so that made me have some relief. I was actually very happy to see lots of masks up even before that, but it was reassuring to have the mandate kick in while we were there.

The next day, we wandered over to the Linq and O’Shea’s to gamble and drink, and then we had lunch at a fun pizza place (with a cute waiter) and continued to drink. There was more gambling after, and then we all got ourselves collected to have dinner at Esther’s Kitchen, which was across the street from the sushi place we ate at the night before. Delicious food and hipster vibes (Larry would’ve loved it) and then we had ourselves a table at Piranha’s, a gay bar off strip. Oh yeah, before the club, we stopped by Michancy’s apartment, and that was the first time I’ve ever actually been to her place. Any of them, lol. We then drove and parked at Cosmopolitan and then took a Lyft to Pirahna’s. Needless to say that was a blast. We got there at 9:30 (Waaaayyy early for a club) but were there till about 2:30am and it was just so nice and fun to have our own section, our own alcohol, and space to dance without being too much around others.

After recovering a bit the next day, we had reservations for brunch at Mon Ami Gabi, which is basically a tradition at this point. What was cool was that while I didn’t bother trying to get an outdoor table, or even one in the sun room, we managed to get one as the inside table we did get needed to be added to a big party, and the manager not only comped us our first round of bloody mary’s but also got a swanky table in the sun room. We also saw Spike Lee there. It was a fun day. I ended up having a reallllllll good time at the craps tables at Paris Las Vegas – one time at the glass craps table (it’s an electronic table and you bet via a personal screen) and while I had been down there I kept playing because I just didn’t care, and holy shit, this one guy started rolling and I made all my money back. Once he left and others couldn’t roll, I stopped and cashed out, and while looking for Maj, I couldn’t find her, so I decided to go and play at a real craps table again, and holy shit, I rolled really good (and I had been having spectacularly bad rolls this trip) and then this guy to my left rolled INSANELY good. I had texted Maj to get over here and she managed to ride some of that wave too. Oh, craps can be so good when the rolling is right. Yeah, I had a good gambling time this trip. I choose to believe Larry and my mom were helping nudge the dice the right way. That evening we had reservations to Water Grill, which is where we all had dinner back in August 2019 too. It’s a delicious restaurant. Anyway, that evening I kind of wound down as it got really crowded as there were a few sporting events happening that night and on Sunday. It brought everyone in, and I was just ready to be done. It was a wonderful trip with Maj and Michancy. I am really wanting to go back, lol.

The next day was time to head home. I’m happy to have finally been back to Vegas and visit Michancy, and I don’t appear to have caught covid during my time there, and I want to head back there again soon. It’s fun to have a gambling buddy, and Maj is exactly that. So figuring out how to go back and have the right group is paramount.

The following weekend (August 6-8), I went out to Desert Hot Springs to celebrate Stacie’s birthday. She had got an AirBnb and invited a few family and friends over to stay and have fun. Two weekends in a row was admittedly exhausting, but at least in this case, once I got there, there was very little in having to move around again. In Vegas, I routinely was hitting 15k+ steps each day. That’s insanity. Here, there was a pool, there was air conditioned great room, and that was mainly it. We drank, we danced, we hung out in the pool, we cooked meals, and it was just a really wonderful time with this group. This will likely be Stacie’s last hurrah here in California, so it was meaningful. Her plan is to eventually get to Tennessee in the next few months, and I’m excited for her.

Now it’s August 15 and I spent this weekend at home and it was glorious. I did some needed cleaning of the bathrooms, grocery shopping, catching up on The White Lotus in advance of tonight’s season finale, and got the motivation to update the blog again. 2 times in a month? Don’t call it a comeback.