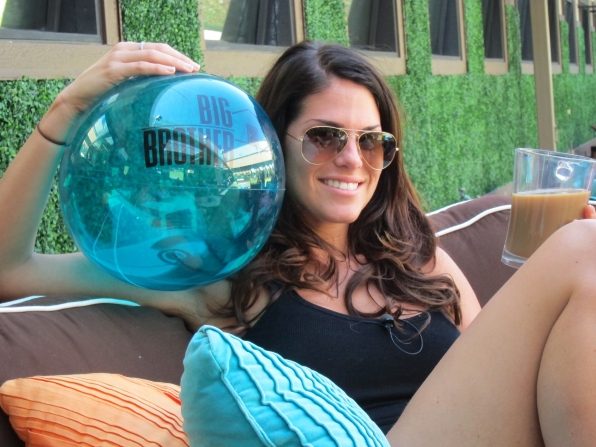 While I still have massive love for Helen, I cannot deny that Amanda still rules my Big Brother heart. Â Every time she is shown, she’s usually imparting wisdom on someone, whether it’s undeserved (Aryan and her racism) or satisfying (being unafraid to tell the mopy mofos that America is most assuredly not in love with their antics). Â Last night was awesome because it was just so direct when Kaitlin was trying to bond with Amanda (I remember the days when I thought these two were going to be the best of allies) about her predicament and Amanda laid it all out: Â Use the Veto or you’re going home.

Brilliant and simple. Â Kaitlin was no longer under the false impression that somehow she could shmooze the house into wanting to keep Jeremy, or that perhaps instead of Jeremy, Helen would nominate Howard. Â Nope. Â Amanda let her know the absolute truth and there was no other way around it. Â LOVE HER.

Did I Get Ahead of Myself?

Of course I did. Â But I just love Amanda so much. Â What actually happened this episode? Â We first had the leadup to the MVP reveal and 3rd Nominee notice. Â This was primarily interesting because the majority of the house is completely set to backdoor Jeremy. Â Backdoor Jeremy. Â heh heh heh. Â Alright, grow up Hobie. Â The house knew that if Jeremy had the ability to play in the Veto though, he could very likely win it like last week and avoid eviction. Â So the main tactic was to have the MVP not nominate Jeremy as the 3rd Nominee, instead nominating someone very strong who in the event Jeremy got picked to compete anyway in the Power of Veto comp could beat him. Â Most, including Amanda, Helen, and McCrae, figured the best nominee then would be Howard, since duh.

Once again, America has voted Elissa as the MVP. Â I call massive bullshit on that. Â I’d hate it if GinaMarie or Aryan won it but seriously, Elissa? Â Again? Â How is Helen or Candice or Amanda not beating her? Â I guess we must bow down to Rachel’s army.

What happened in the episode next though was confusing, as Elissa was trying to form a thought or a strategy. Â And she should stop doing that, as it’s hard to watch. Â You see, Elissa felt bad about making Howard a pawn and really really really resented that people like Amanda and McCrae were using her. Â It just wasn’t fair. Â UGH. Â I can actually understand her point, as yes, she can get a lot of the flak for it, but c’mon, no one is really thinking you’re a strategic mastermind here. Â Believe me, the targets know you’re just a tool.

So Elissa instead decided to go with Spencer as her nominee and not upset Howard. Â Luckily, the Veto comp drawing favored her decision, as Jeremy ended up not getting picked. Â But there were certainly a few raised eyebrows when Spencer was chosen. Â Amanda did her best to try to reason with Elissa why Howard was the choice, but that just wasn’t happening.

Clearly, the middle portion of this game will involve the less-awful people turning on each other, and clearly, that schism will have Elissa on one side and Amanda on the other. Â I’m fine with that, and I think it’s also clear which side I’ll be on. Â Amanda 4EVAH. 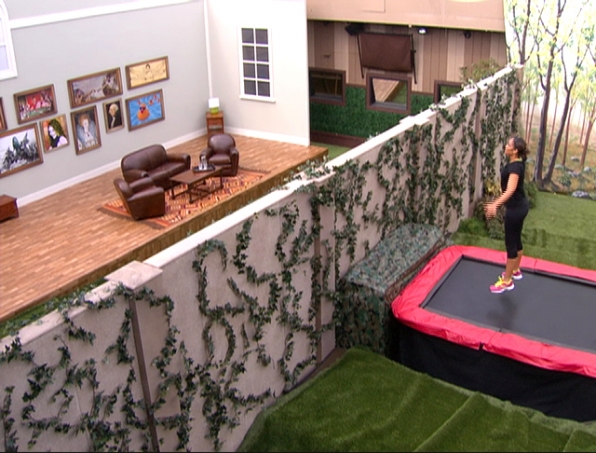 The Veto comp was pretty cool, actually. Â I do so love Big Brother’s challenge creators. Â Sometimes they go lame, but things like this art challenge must have been fun to not only create but also participate in. Â I also liked the modified Classic Art pieces, especially the ones like with Judd & Spencer in the God & Adam scene from the Sistine Chapel and….while I hate to have anything in common with GinaMarie….the Nick one was pretty cute with Nick as Da Vinci’s Vitruvian Man.

In the end though, the trickiest competitor ended up winning: Â Kaitlin. Â Why tricky? Â Because only she would potentially decide NOT to use the Veto in a misguided effort to save Jeremy. Â The editing of the show made it seem like she was truly considering it. Â As it turns out, after exhausting her attempts to convince Helen and others that Howard was a bigger threat, she used the Veto on herself. Â Rightly so. Â Even though Aaryn and Spencer are potential bigger threats, Kaitlin would be a juicy target in order to break up yet another powerful duo (Kaitlin & Jeremy). Â Aaryn is on her own now and has absolutely no chance to win – I still think Helen will go for a secret final 2 with her as why the hell not? Spencer is….potentially crafty but not a primary target at this time. Â So it did come down to her or Jeremy, and it seems she wants to try to win this game after all. Â We shall see.

So Kaitlin took herself off the block and Helen didn’t hesitate in nominating Jeremy in her place. Â I know that I didn’t represent myself well last week when I predicted Elissa had no chance in hell to save herself as I just didn’t see where the votes were. Â I didn’t anticipate that Helen and Elissa would masterfully campaign against Nick. Â  Yet there was good strategic reason for the house to get rid of Nick over Elissa. Â This time? Â Jeremy is almost certainly a goner. Â Maybe he can try to provoke Aaryn to go on a truly despicable racist rant and the house just votes her the fuck out. Â Perhaps Jeremy can convince everyone Spencer is a master strategist and a truly skilled player and the biggest physical threat in the house….but yeah, no. Â Jeremy has shown himself quite capable of winning challenges and he’s shown himself to be a complete dick to everyone not in his alliance. Â Kaitlin’s chiding of him for being such a dick was funny as it showed self-awareness but it also showed an arrogance that was completely avoidable and manageable, yet wasn’t. Â I’d be shocked, SHOCKED, if Jeremy isn’t voted out tonight. Â That would make three guys in a row – and three guys as the first three out of the house….I think that would have to be a Big Brother first.

Quick Check-in With My Girls

I’d almost think about including Elissa, but her actions in this episode reminded me that she’s really kinda stupid. Â Without Helen, Elissa would have been gone from this game a long time ago.

Helen! Â  At this way too early of a point in the game to make a real prediction, I have to say that this is your game to lose. Â You turned on the waterworks to get what you want and to spread a false picture of your mental state. Â You have ALL the info now. Â You’ve got Spencer and Howard begging for forgiveness while also keeping them from resenting you – so even if one of those two wins HoH next, I don’t anticipate them coming after you immediately. Â Your political background is proving most worthwhile and I couldn’t be happier. Â I am relieved that you are a real player getting attention as I was afraid you were a typical floater…nothing typical about you though. Â Now if you could whisper to Andy, Judd or Jessie to start playing the game. Â  Talk about being walking votes at this point.

Amanda – you’re amazing. Â I think victory is also within your grasp, but you have more of an uphill climb ahead of you. Â People are already aware that you’re a threat as you’re unafraid of mixing it up when needed and you’re a savvy gameplayer. Â I want you to go all the way but that will count on you properly reading the mood of the house and recognizing when you’re in trouble. Â I think allying with Helen will serve you well and I wager you can’t wait to turn on Elissa and get her out. Â I know I’d be thinking that as Elissa is clearly not reliable.

This season, despite it’s ugliness at times with certain houseguests, has been compelling. Â Still amused that there’s a disclaimer at the beginning of the show now – probably will stay that way while Aaryn is in the house. Â Yet despite that or maybe because of it, it feels like the season is well under way and not going through that slow burn of initial alliances flaming out. Â The house drew lines down the middle quite quickly this time and I love it. Â I have a feeling the next few weeks COULD be a bit boring if the remaining targets like Aaryn, GinaMarie and Kaitlin don’t put up a fight and just get picked off…BUT I don’t think that’s what will happen. Â Aaryn and Kaitlin strike me as players and I think they’ll force the majority alliance to splinter sooner than expected. Â I know that’s what I’d be angling to do. Â Regardless of what happens down the line, I think it’s still fairly safe to say goodbye to Jeremy tonight.