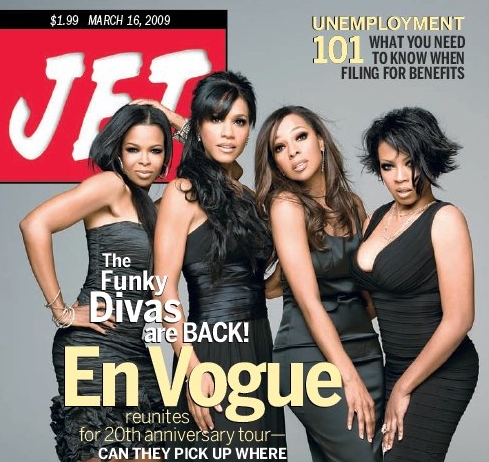 Now this is some damn cool news.  The ORIGINAL En Vogue are all back together and touring again.  If you grew up in the 1990s or at the very least turned on a pop radio station, you no doubt heard these songs throughout the times, such as “My Lovin’ (You’re Never Gonna Get It)”, “Free Your Mind”, “Hold On”, “Love (Don’t Let Go)”, and “Givin’ Him Something He Can Feel.”  Trust me, there are many more awesome songs by this group, as I became a fan during the Funky Divas era, then picked up their first album, Born to Sing immediately thereafter.  They then released an EP called Runaway Love which had the new song plus some remixes of their Funky Divas song.  Then the drama began.  It’s not clear what really happened, but whatever happened happened and Dawn Robinson (the one on the left in the pic) had quit the group.  She did so right before they were about to release their next album, which was hastily re-recorded and renamed EV3.  It was a fantastic album still, but it nevertheless was missing Dawn’s amazing voice.  Another album was released a few years later called Masterpiece Theater which again I really loved, but that album definitely tanked with everyone else.  They were dropped by their label, and that’s when En Vogue definitely left the spotlight.  The core group members rotated in and out, replaced by some temps as they would do sporadic shows here and there.  I’d mostly relegated them to my “Memories o’ the 90s” long term brain storage, breaking out their albums every now and then to relive the fun of their music and to bring back the 90s too.  Wow.  The 90s!

Needless to say, when I found out my friend was headed to one of their shows tonight, I had to do some Internet research.  Sure enough, all 4 of the original group are back together and touring.  Even a new album is being rumored.  HOLY SHIT.  That is so awesome and incredible.  What blew my mind was reading that it was under the auspice of being their TWENTIETH ANNIVERSARY.  Another holy shit on that one.  But it’s true.  <sigh>.  As most can rightfully say, En Vogue has been out of the mainstream scene for a while now, so it’ll be interesting if they can break back in.  All of the members have amazing voices and put any of their contemporaries to shame, including the illustrious Destiny’s Child.  All sang lead and no one was the “Beyonce” or “Diana Ross” as every one had their moment to shine.  I always just loved their songs.

One time, while I was working at Bookstar in the Beverly Connection (both Bookstar and the Beverly Connection are either now no longer in existence or nothing like what they used to be), I was walking from the parking garage to work.  In the garage, I noticed this awesome BMW convertible being driven by a very attractive black woman.  She looked familiar, but I didn’t know why.  After checking in at work and taking my station at the main register, that same woman had come in to buy some books.  And she was at my register.  And when she gave me her credit card, the name was Terry Ellis (!!!!!!!!!!).  I nearly fell out.  I couldn’t help myself and I immediately told her how much I loved her and En Vogue.  There was no way I couldn’t say something.  So that is my closest brush with En Vogue.  I swear if they go on another concert tour to promote hopefully a new album, I will so be attending, just like I vowed when Madonna went on another tour.  So here’s hoping!

In other news, I’m trying my best to wrap up some website transitions.  I am going to be officially closing down my other site so for probably a long while, my old site’s contents will be MIA.  I have them all saved to many places now so I can put them back eventually.  I am hoping that the DNS change is going to kick in soon so that the domain hobiebarnes.com will now be autodirected to this new site.  It has comments capability on the blog and pictures, as well as a built-in search feature.  Also, it’s MobileMe, which is an Apple product and allows you to have a whole LOT of synchronization with your iPhone and the ability to keep data stored in a central server place.  I probably just geeked out to a lot of people who didn’t understand one word I said.  Sorry!!

Anyway, one thing is that if you have my email saved as hobie@hobiebarnes.com, well, that email will probably stop working very soon.  So you’ll need to make sure that you use hobiewan76 @  gmail.com.  That will get you my attention!