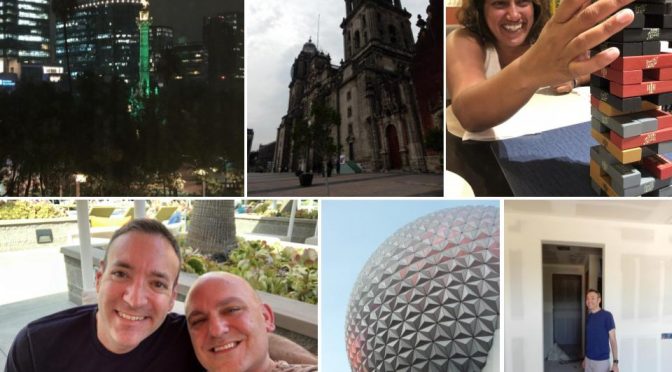 I won’t lie – the last two weeks have been hard.  I’ve been having to travel for work and while of course when one hears where I went, they probably think I’m a little bitch because oh boo hoo, I had to go to great places.   But the fact that I had to leave Larry (even though he had amazing support from friends and family while I was out) was ridiculously hard to deal with.  Then the travel was all about work, but when you’re traveling for work, it’s very difficult to not fall behind on the regular work stuff you’re also responsible for doing.  So yeah, it has been a relief to be at this point and know that I am back to a regular kind of schedule.

It wouldn’t be me though if I hadn’t taken pictures while out and about!  So let’s start from long ago and work our way back to drywall.  It’ll make sense once you see the pictures.

Larry started his 4th round of chemo back on Monday, August 27th.  It was another round of the FolFoxIri + Avastin, which is the max approach we can take at this point.   I then was leaving to go to Mexico City on Tuesday.  EEK.  Larry wasn’t on his own though, as my mom was able to help take him on Wednesday for unplugging the chemo port, and Nicki also came by on Tuesday night to keep him company.  It was a relief to know he was in good hands.

I went to Mexico City to help with training up PwC Mexico folks on our code review template and to also, and more specifically why I was there, to give an introductory crash course on COBOL.  Yep, what was my life for 16 months in 2016 and 2017 is now part of what I’m known for here at PwC.  Good times!  🙂  I was slightly nervous about the whole ‘going to Mexico’ thing, but I managed.  Uber is prevalent in Mexico City just like nearly everywhere else in the world; my experiences from Puerto Rico also had me prepared for what to expect, as just like there, there’s plenty of the regular, non-touristy areas where people live as well as the more haute-touty places.   While during the day of Tuesday and Wednesday were spent at PwC Mexico, the evenings were good for enjoying the area.  My coworker who was there with me is Mexican and knew the area, so we had good ideas for where to go.  The first night, we went to a good restaurant right nearby, but on the second/last night, we got to go into historical Mexico City’s Zocalo, the city center.   It’s where you see James Bond in the beginning of Spectre – and it’s pretty damn great.

Our restaurant that night was Los Canarios

Seafood there and it was good

The hotel is along the Paseo de la Reforma, kind of the nicer area

Morning outside my hotel room

At the Zocalo of Mexico City, this is the Cathedral from the 1500s

You see it briefly in the opening of Spectre

The inside is stunning – lots of gold

The Zocalo is the main historical center of the city

Was hoping to see the plaza all open, but a festival had tents up.

This restaurant is called Azul

The ceiling’s all gorgeous glass

The inside balconies are beautiful

Back at Azul with its red-covered trees

I got the mole enchiladas – muy delicious

I was very very happy to get home though – which was Thursday night.    And god bless Global Entry – I was able to get right through customs without much fuss at all.  But leaving LAX on a Thursday evening is awful any time of the year, but worse before a holiday weekend.  I got home finally but I was exhausted.   Obviously Larry wasn’t feeling all that great himself, and in this case, one of the side effects of his chemo was causing him a lot of discomfort.  We had been trying to rig some solutions using OTC medicines but it really wasn’t doing much to help, regrettably.  Spoiler alert:  Larry was able to call the wonderful GI doctor (Dr Fisher) and get prescribed something that has drastically reduced his discomfort.  It’s not entirely gone, but to say that it’s so much better for Larry is entirely accurate.

Anyway, let’s talk Labor Day weekend.  We had originally been going to go to the Hollywood Bowl to see John Williams’ concert, along with my mom.  But Larry’s discomfort basically meant we weren’t going to be leaving home this weekend for that kind of excursion.  It sucked, but Nicki and Rekha reached out to see if we wanted some company so they came over and brought delicious food from All’Acqua (which is a great Italian place in Atwater Village).  That evening, in addition to food, I got them to play Jenga with me, so yay!

On Sunday, we again mostly just hung out at home and watched The Crown and relaxed.  It was nice.

Then on Monday (Labor Day), Nicki & Rekha came back over to enjoy our apartment’s pool complex, which is a very nice thing to have.  We not only enjoyed the pool, but managed to snag one of the cabanas.  It was a nice way to spend the day.

Jetting off yet again on Tuesday, I went to Orlando for PwC’s Risk Assurance leadership conference.  This was a trip that had been scheduled for quite a while, and at one point (pre-diagnosis), I think it was something Larry & I had considered maybe him going on too so we could spend some time at Disney World.  That didn’t happen obviously.  It was a good conference though and I got to spend some time with current friends and connect with new people too.  Always about the networking in this company.  Like I said before, Larry ended up getting some medicine to help with his side effects while I was gone this time, but when I left it was definitely not a resolved issue.  Happily, by Tuesday evening, he was feeling better.  So yay for victories where we can take them.

So while I was in Orlando, we really only got one evening of pretty awesome fun – we were going to get a dinner in EPCOT center and then time to ourselves in the park!  Not a lot of time (<2 hours, actually) but still, this was my first time ever at a Florida Disney park so I was gonna take advantage of it.   Larry gave me the heads up on what rides were worth it in EPCOT so I had my marching orders.  A few others of my friends were on board for this too, so off we went!  Basically from our event space by the UK area of EPCOT, we headed straight to Spaceship Earth, which is within the famous geodesic sphere.   It’s a slow ride that drives you through the world of communication and how it’s evolved over 30k years.  It’s pretty great, to be honest.   It’s also cool to be inside the sphere!   After that, it was over to Test Track, and let’s just say that this ride is the shit.  It’s clearly a forerunner to Radiator Springs Racers in California Adventure, and possibly even more fun?  Finally, we ramped up the intensity for the last ride, Mission: Space, and geeeez, it’s a rough one.  It’s a G-Force simulator and fucking wrecks you.   It’s still a fun experience, but next time, I’ll take the less intense alternatives, which do exist!

Morning at the Dolphin before the day began

Ari and I were there very early

Walking toward the Swan

Waterways for the ferries

Dolphin from a distance

Walking the Disney Boardwalk on the way to EPCOT

You can see the France part of EPCOT

You can see the American Adventure area over there

Strolling through the UK area

This is where PwC’s dinner was being held, at the World Showplace Pavilion

It’s a bigger sphere than I expected

In Larry’s words: Like Pirates but no water and a lot about communication

Heading up the path

What awaits you after exiting the ride

Test Track was up next – and it’s AMAZING

It’s very much like Radiator Springs Racers in CA

Sponsored by Chevy – you get to ‘design’ a car to test

You must go on this ride

You can choose either Moon or Mars

Green side is less intense than Orange side

Now back where PwC had a fireworks viewing spot

This is the lagoon

Heading back to the hotel

Here’s the Dolphin at night

Again, it was wonderful to be back home after this trip, especially knowing it was the last one for hopefully a while.

This weekend has been good – our house has drywall up!!  It’s actually been a few weeks since we heard that process started, so waiting a few weeks means it’s all up now.  It’s very exciting – within the next few weeks, cabinetry will be going in.  Yay!

Phase 1 looks as close to done as you can get

Walking out the front door with Thais

Heading up to the living room

Where the TV will go

Looking at our inset lights and speaker holes

The place for TV power and conduit

View from kitchen to living room

Looking to the Phase 2 units across the way

This bridge won’t be there in the end

In the master bedroom

View from the bedroom window

Looking thru the master bathroom to the closet

The landing and then the guest room

In the guest room

Getting a sense of the hallway space

A little area also to the right of the entry path