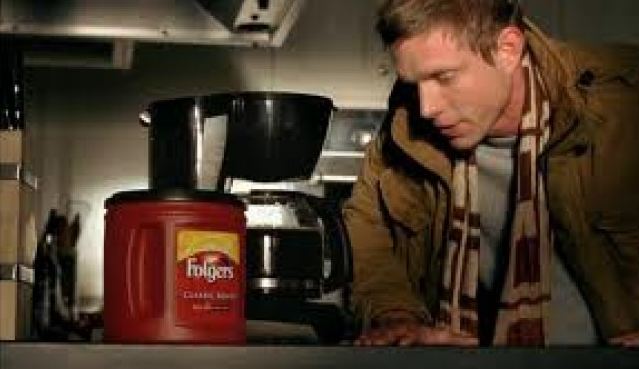 Maybe I’ve become a weepy little bitch in my old age of 35 (egads, just typing that makes me a weepy little bitch), but I swear, EVERY TIME I see this recent Folgers coffee commercial where hunky brother comes home and the parents stayed up all night to wait for his arrival but he shows up late and his sister opens the front door and when he gives her a gift she takes the bow and puts it on him and tells him, “you’re my present this year.”  TEARS EVERYTIME.  WHY?????  It’s such a ridiculously cliched commercial and just like the one from the 80’s where 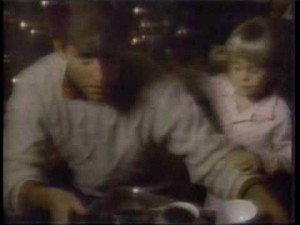 “Peter” the (again) hunky son (at least if you consider it was the 1980s) comes home to the smell of Folgers.   These commercials shamefully manipulate your basest emotions, whether that emotion is the arrival of nice hotness or just the whole long-separated family member comes home and everyone is happy.  Also, that the coffee was the thing that made it happen.  Specifically the Folgers.  Obviously.  Although I drink Maxwell House at home so maybe that is preventing random hot guys from coming over.  That’s probably for the best then.  🙂

There is also that other commercial with the annoyingly cute “Jingle the Husky Pup” that makes me think I need to have that, just for the cute little stuffed husky pup you get and the fact that it barks when you say certain things.  Maybe this just means that we need to get a dog.  I keep leaning towards that conclusion and try to keep coming up with reasons why not.  It would definitely be a humongous change of lifestyle for both Larry & I, but I think it would be basically awesome to have a dog.  We will have to keep this in mind still.

Other News from this part of the world:

Even better when you can get into the Windows 7 OS installation screens!25-Nov-2011 15:01, Canon Canon PowerShot ELPH 500 HS, 2.8, 4.3mm, 0.006 sec, ISO 200
View at Picasa
« Previous
Alright, I think that’s enough for now.  There will be some upcoming posts with either pictures or the PC upgrade post.  I like to keep track of what I’ve been doing in that realm as well as what pieces I use.  Awesomely enough, Larry was able to use my components that I replaced to build a “Hackintosh”, which is basically making a PC into a Mac, which is not something Apple really wants you to do.  But doing that means you can build a much more powerful system that what Apple may give you, plus you’re not paying the Apple “premium” too.  He seems to be very very happy with the performance he gets out of it as the components I replaced really weren’t that obsolete, as I had bought them just under 2 years ago and they were almost top-of-the-line then.
Okay, back to work, Hobie.  Someone’s bound to notice you’re not being productive for NBCU….  sshh….. 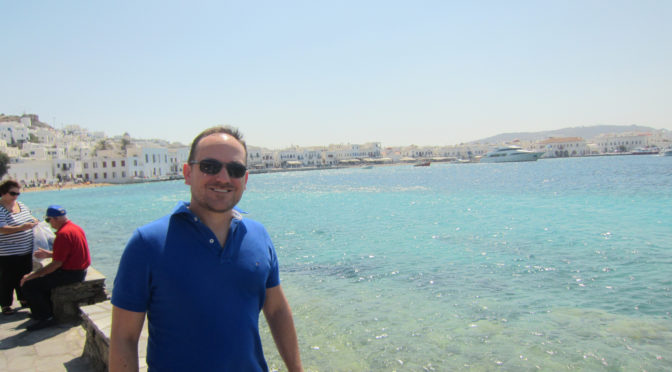 It’s a weird-looking date hence there’s all sorts of things that wanted to have this as a momentous date, incidentally for some and totally intentional for others.

Incidentally? It’s Veteran’s Day (yay soldiers and airmen and seamen and marines!) and it’s all-the-way-up-to-volume-11 Spinal Tap day too.  Intentionally?  Elder Scrolls V: Skyrim, The HP7 Pt2 Blu-Ray, and Immortals came out.  I’m excited for the first two…the last one, maybe if we could watch it on mute.  I’ve read that there are plenty of Greek soldiers who don’t know how to wear a shirt in it.  That’s always a good thing.

I’ve been playing GTA4 and Tropico 4 a lot lately, then dabbled just a bit in Skyrim this morning but I can not let myself get absorbed.  Must try to get through these in due time.

Oh yeah, if you know or care about my sciatic nerve problems, my MRI revealed that indeed I do have a tear in one of my spinal vertebrae discs, about 5mm in length.  The resulting glob of goo from the disc is now pushing up against the bunch of nerves coming out from the spine and, you guessed it, one batch is that set of nerves that runs down my right leg.  OH THE FUN.  My options per the doctor are surgery, steroid injections, or let it heal some more/physical therapy.  He advised against the first two as the rationale was that in two years, all options will result in the same relief.  And surgery and steroid injections all have additional risks and such associated….so I did opt to continue with trying to get better with time.  I can admit that the pain has reduced, although my days go from pretty good to pretty bad.  And lately, trying to get out of bed has been horrendous – I’m not sure what is causing it but it’s insane.  I have a feeling that because I doubled up on the Gabapentin at night, I move around more than I should and when the Gaba wears off, the pain comes roaring in.

I bought a seat cushion that has a cutout right where your ass-crack is;  apparently that is to allow your spine to not get that upwards pressure from the seat as just your asscheeks are sitting while the spine can sorta sit through it?  I don’t know, I am using it now and I am feeling way better when sitting than I did previously, so perhaps I’ll need to swing by the medical supply store and pick two more up, one for the car and one for the office….  Anyway, once my pain is such that is nearly minimal, I can start some physical therapy to strengthen my core.  Who knows, maybe I’ll get a six-pack….like this guy: 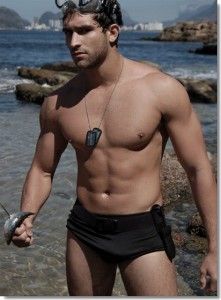 Hey, it’s Veteran’s Day, and this guy has dogtags on, so I bet he must be a Veteran too…. heh heh…

Alright, enough hotness from random strangers for you.  Here are some well-deserved pics from Larry & my trip around the Eastern Mediterranean – this time from the lovely and fantastic spot of Mykonos, Greece.  It really is amazing how wonderful the weather was the entire trip.  Sure, it was effing hot, but there wasn’t any rain nor any gloomy days, except for the day at sea which was coming up the day after Mykonos.  But who cares, right?  That’s what the inside of a massive cruise ship is there for.

June 22, 2012 Update: Â I think that the captions of the photos for this particular excursion are sufficient to describe the adventure on this day.  It was a great day and full of beautiful Greek island scenery.  One of the fun highlights was while eating lunch on the Mykonos coast before heading back to the ship.  Lots of people-watching (aka checking out hot guys).  The ship left in the afternoon so when we got back, there was time to go hang out by the pool which was a fantastic way to drink and soak up the rays.  Some times, you just need to put your feet up, listen to the music, and enjoy the sun.

Off to the Isle of Delos

The view from our room of the Mykonos area

It’s hard to get over how huge our ship is

Our excursion for the day was to the island of Delos, reachable by ferry

On Delos looking back towards Mykonos, I think

The clear water of the sea

In the ancient and quite intact ruins of Delos

Delos was deserted for over a thousand years, allowing much to remain intact

Larry in the ruins of Delos

In one of the ancient shops – this mosaic is a replica

No more roof but still striking

This was the window of the currency exchange office

Delos was located central to many cultures so exchange was needed

A bad view into a cistern

The only arches in Delos for a cistern

Closer view of the cistern arches

The remains of the 5000-person theater

Heading back down to the main plaza, the Agora

Hobie and the Greeks

Larry amidst the beauty of Greece

One with both of us!

In the remains of the Sacred Way, leading to Apollo’s shrines

In the background is Mt Cynthus – we’d climb it soon

Mt Cynthus – not too huge a place

Places to house the French archaeologists who maintain Delos

Larry at the Terrace of the Lions, dedicated to Apollo

Apollo is said to have been born in Delos

As you can see, there are tons of ruins

On our walk to the Museum, where most valuables are stored safely

The rocky lane to the museum

What’s visible from the museum

AT first we weren’t going to, but we had time to take the path

..the path to Mt Cynthus’ summit

We have our climbing shoes on, so let’s go

We weren’t alone on our quest

You can see midway up is the temple of Isis

This is the House of Hermes

You can also see the dock we arrived on

Such a beautiful place

You can also see that the seas were a bit rough

The House of the Masks

My shirt matches the seas!

Approaching the temple of Isis – yep, an Egyptian god temple

This temple of Isis – since Delos was such a middleground, even Egyptians had fun

You can see the stone staircase up Mt Cynthus

After leaving the Isis area, the steps ascend again

Looking back at the Isis temple

The path gets a bit more strenuous and treacherous

Larry is making his way up

About halfway up the staircase, looking back down

You can see the harbor and beyond from up here

Almost at the top

Top of the world!

I made it to the top

Not sure who the red-haired lady was…maybe Artemis?

The shrine to Dionysus

Back at the dock looking back at Mt Cynthus

At our seat on the ferry

About an hour long ride back to Mykonos

Our ship docked away from the main Mykonos port

The white buildings of Mykonos

Apparently it’s quite the hotbed of nightlife activity

Look at this place – Mykonos is gorgeous

The water, the white buildings – so beautiful

We grabbed delicious lunch at this great people-watching cafe

I wouldn’t mind boating around the Greek Isles

One of the open plaza areas

The water is kind of unreal

Another view from our window – do we have to leave?

Delos from our ship

Now this was taken as our ship left