It was one of those very rare right-place right-time things!

So there I was on Saturday afternoon – we (Susan, Jeff, Jeremy and I) had just finished going to Lowe’s to buy some paint and we were now at the fun part of the day: going to Best Buy to look around! I didn’t see any DVDs I wanted, so I headed to music – nothing there struck my fancy either! I was starting to get the panic sweats….what if there was NOTHING I wanted at Best Buy???? Preposterous. So I headed over to Video Games and saw that again, the Wii section had games and accessories, but no console. Kyle had scored a Wii this past week (lucky bastard), and while I was jealous, I also realized I could wait…unless opportunity struck. I then walked over to the home electronics section and I saw the under-the-counter kitchen DVD player I’ve been coveting for nearly 2 years – and while I saw that they had it in stock, I was about to pass on it until I saw that it was $50 off! A quick mental debate erupted and just as quickly ended as I grabbed the box and said, dammit, this bitch is mine. Happily walking over to the computer games section, I then saw the new RTS game “Supreme Commander” which has been getting uber-raves, so I picked that up too. I then walked over to the digital cameras – I am toying with the idea of replacing my 3-year-old digital camera with something a bit newer – and perused all the models they had in stock. I’m sort of interested in the Nikon Coolpix S4 (I think that’s the right name for it), but whatever – one of the Best Buy salesmen comes up to me and starts chatting me up about the Supreme Commander game I had. This led to a video game discussion, from PCs to Xbox 360s to Wiis (oh my!). I then casually mentioned that I’d love to get a Wii but had resigned myself to the fact that I’ll have to wait for a while until they become commonplace. The guy gets a gleam in his eye and he says to wait right there as he would go check around. I kill time waiting at the cameras, chatting with Jeremy, etc. About 10 minutes later, the guy strolls up to me with a brand-spanking new box o’ Wii. SWEET! I was totally a Best Buy junkie before, but this has utterly sealed the deal for me. And that guy is my total new best friend. Anyways, now that I’ve actually got one of these babies in my hot little hands, I have to go back to the Nintendo Wii section so I can pick up Zelda and any extra accessories that strike my fancy. I put the Wii box on top of my DVD player while standing over on that section, and literally like within 1 minute, a guy says ‘excuse me’ to me and reaches down to take my Wii – HOLD UP! I’m immediately like “Uh, that’s mine – you’ll have to get your own!” I let him know he should probably ask the salespeople for one, as apparently they have them in back. Amazingly, this word gets around the entire store – I kid you not. People come over to where we’re standing and look at me (or the Wii, can’t tell for sure) like a celebrity – one that they are enormously jealous of. So to boost up my ego some more, I start walking around the store completely holding the Wii box so it’s displayed for all to see. I got so many stares and glares – it was awesome! Finally I go to pay for it, and get the same reaction from the cashier (more of a surprised expression from her than a glare) and the security guy on the way out (“You got a Wii? Woah!”). I find out that basically that shipment had just come in (6 Wiis total) while we had been in the store and that before they could even put the Wiis on the shelf, 3 had been purchased (mine included). Like I said, lucky timing was the name of the game. And it was an opportunity I wasn’t going to pass up. Unfortunately, Nintendo has not produced nearly enough extra controllers/nunchuk combos (you get one set in the box) and so once you are lucky enough to get a Wii, the next real challenge lies in getting those. Apparently they’re likely to be in wider distribution starting in April!

So anyways, that was my exciting story from Saturday – after that, we all played the Wii Sports, which is freakin’ ridiculous fun. You can bowl (awesome!), play tennis (tiring!), box (stress-relieving!), play golf (somewhat interesting), and baseball (apparently I am too weak to hit a home run very consistently). Zelda was also fun to play. Also, you can pay for and download old legacy Nintendo games from the NES, Super Nintendo, and Nintendo 64. Awesome. And the fact that it’s motion-sensing and very accurate is incredible.

Then today I tried to be a little productive – I made my theater room/basement a bit bigger by pushing the couch further back, which truly makes that room spacier. After looking at the latest Home Electronics Ideas magazine, I have some good ideas for how to finish that room off. In some truly special-ed news though, I also installed my under-the-counter DVD player in the kitchen. You can see it in the picture below – I obviously got it installed fine and it works great. But the installation itself was hindered by a major obstacle: Me. You see, I bought a drill set so now I’m quite dangerous. And retarded. Because while I got the first hole drilled fairly easily, the drill bit was a little stuck in the cabinetry, so I reverse the drill’s direction to get the bit out easier. And FORGET TO CHANGE THE DRILL DIRECTION BACK TO ‘DRILL’. So I ‘drill’ two more holes in the cabinetry….which is now basically akin to me pushing really hard on a drill against a sheet of wood and trying to make a hole. It’s not easy…at all. But through sheer willpower, I make it happen… only to realize after finishing that third hole that for-the-love-of-God, I’m not actually using the drill function and am killing myself for the sheer fun of it. And of course, when I change the direction of the drill, that fourth hole is like a warm knife through butter. I truly am a stupid boy. 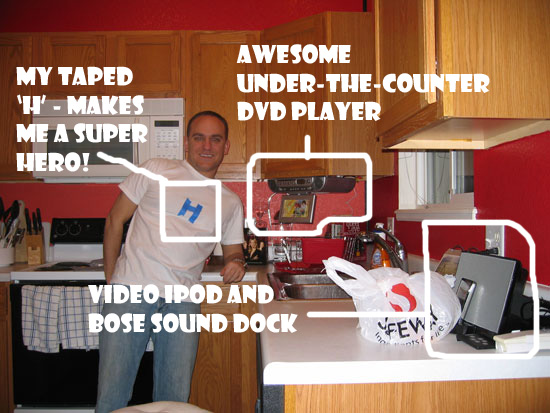 And the weekend is nearly over – and I return to work tomorrow. Funny news from last week – the deputy commander isn’t having his surgery after all (postponed till September) and will be returning in a week. So while I’m relieved (I am definitely not a suitable substitute for the amount of knowledge this man has), …. wait, there is no bad side to this. After last week, I can not wait to get the heck out of there. I don’t care where I go as long as I’m not there anymore. I’d love to write the rants I have in my mind, but I can’t quite do that just yet. Come back September – perhaps by that time I’ll still care enough to write about it (doubt it though).

OH Yeah, the Europe trip has also changed a little bit – we’ve removed Rome from the equation. Now it’s a London – Paris – Normandy – Paris – London trip, which I am totally cool with. Adding Rome to the mix was moving things much too fast – not enough time really to do anything without rushing through it. And really, and this is what I told Jeff as well, Italy is basically by itself an entire trip. Not only can you go to Rome, but you then visit Florence, Pisa, Venice, Milan, Naples and any other assorted locales. And that would be one hell of a trip by itself. So now can we take more time in Paris and London, and it will be AWESOME! One of the cool things that Rick Steves suggests to do in Paris is a Nighttime Taxi Ride through Paris’ excellent locations. We are TOTALLY doing this. Anyways, I just can’t wait to go!

Hope all is well in your neck of the woods!