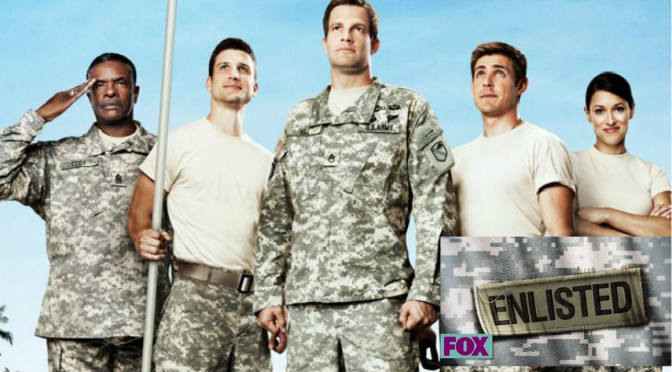 There’s a new show on Friday nights this season on FOX called Enlisted.  It is by far one of the funniest new shows I’ve seen but most importantly, it is by FAR the show with the hottest guys on it.  I’d even go so far as to say it is the most gay-baiting show I’ve seen in a long while too, much more so than the new gay-themed show on HBO called Looking.  “Gay-bait” may be a harsh word, but feast your eyes on the image above or the scattered images below….these guys are hot.  Now, let’s be clear, hotness will definitely get me in the door, but if the premise or execution of the show is flawed, then I’d have to sadly leave.

Enlisted focuses on an Army squad called the Rear D, as its function is to take care of the base back on the homefront.  As the show paints it though, this is where most of the undesirables are left so they’re out of the way.  Pete (Geoff Stults) is a Type-A supersoldier sort who kinda snaps out in Afghanistan and assaults a superior, earning himself an immediate entry into Rear D.  Waiting for him at Rear D are his two younger brothers, middle-child Derrick (Chris Lowell, also known as Piz from Veronica Mars) and youngest brother and goofily innocent and dim Randy (Parker Young, by far the hottest thing I’ve seen on TV this year).  Let me restate that last part – Parker Young is the hottest thing you’ll see on TV this year.  Here’s a sample:

All these pics are from the show, except for the two upper right ones.  Seriously.  What I think I love most about this show is that it firmly knows Randy is ridiculously hot;  so they put him in as little clothes as possible, or at least the most form-fitting BDUs one can find.  And let’s just say, the other brothers are smokin’ hot too.  Actually, I think Derrick is just cute, but I think I’m biased as I don’t know if I would say I was a Piz fan.  But back to Randy:  Parker Young is also seemingly willing to go with any and every situation the showrunners put him up for, and even better, he’s a hilarious comedic actor. 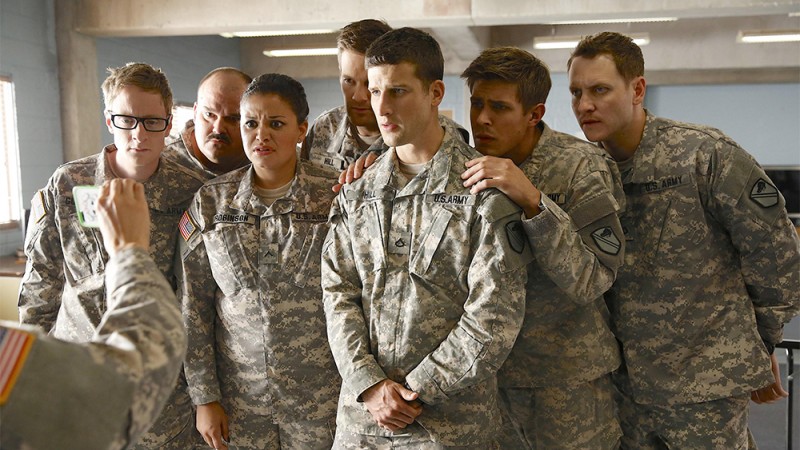 I mentioned that hotness will only go so far.  If all there was was attractiveness, it’d be no better than a soap opera.  But Enlisted is also a very funny show with an actual perspective about what it’s like to be in the military.  The Army is certainly different than the Air Force in many respects, but certain issues resonate across the services.  Issues like PTSD, loneliness, and guilt are examined in this show and actually in a very well-done manner.  I’d read that Enlisted is very much in the vein of M.A.S.H. and it’s easy to see the comparison; what’s interesting is that it’s the first sitcom in a while that focuses explicitly on the military.

It’s not just the brothers that dominate the show though.  A very good ensemble exists in the rest of the squad that the Hill brothers serve within.  You can see Keith David above who plays the squad’s Sergeant Major, while a very funny group of actors play the remaining squadmates.   The creator of the show hails from Cougar Town and Scrubs and those shows certainly can inform you of the type of show you’ll be watching.  Lots of humor, lots of heart, and in the case of Enlisted, lots to look at.  I mean, seriously, this show is ridiculously hot.  I highly recommend anyone give this show a shot – it’s certainly more than just the hotness, though that helps.  I’d love to see this show get the ratings it deserves and stick around for awhile.   For my sake, let’s see if Enlisted can get another few seasons.  Come on!!!  But seriously, it’s a funny, well-meaning show with heart and an appreciation for the military.
And an appreciation for the hotness that is Parker Young.