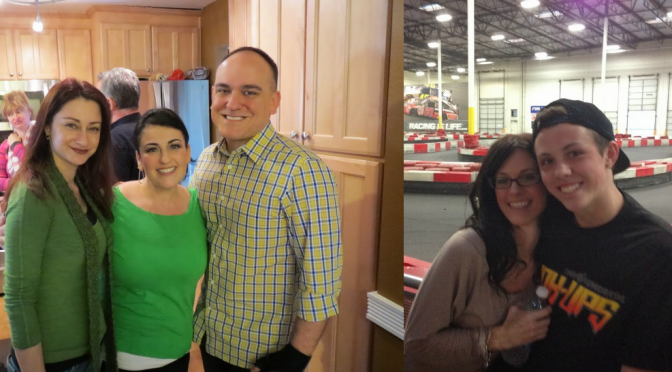 This is a pictures post, that’s for sure.  First up I’ve got some pics taken today from Trent’s 17th Birthday party, which was held at a place called K1 Racing.  I’d never heard of this place before today, but now having gone, I’m a fan.  It’s go-kart racing but it’s pretty sophisticated in that all your stats are gathered during the race so you can see how you did.  The first race for me was pretty sad, as I was not feeling comfortable at all and was worried I’d flip the car.  I needn’t have worried.  Though I did come in 10th out of 10 in the first race and only completed 6 laps (SIX!  Everyone else did 13 – Yes, it was that bad), after a break and realizing that the go-kart was not about to flip, I did a healthy 7th out of 9!  And actually did 13 laps this time – I was freakin’ flying.  Once you have that confidence, it’s amazing how much faster you’re willing to go.  After that we went to a really good sushi restaurant in Ontario.  Surprisingly good, actually!  Anyway, we’re home now and since I’m tired, it’s these pictures and another set below….

Inside the massive space

One of the two raceways

Me, Stacie and Kathy with some photobombing

Where you get in your go-kart

We’re ready for the first race of the day

We’ll see how this goes

Getting ready for Round 2

Larry in the rear

So I was all about my cookies last weekend that I made for Mila’s Super Bowl party, yet I completely forgot when getting home from that fun event that I had taken pics too!   It was so much fun to get to see all my buds.  It’s still so fantastic to realize that the majority of us have known each other and been friends since 1988 or so….which is like 26 years….holy crap that’s a long time.  I love it though.  LOVE it.  Anyway, despite the game being a blowout, it’s always a great time with them and here are the pics to prove it.  I hope to see them more often though, as it had been awhile since I’d seen them before that.

The 3 Originals – Sveta, Mila, and Me

Tank gets some love