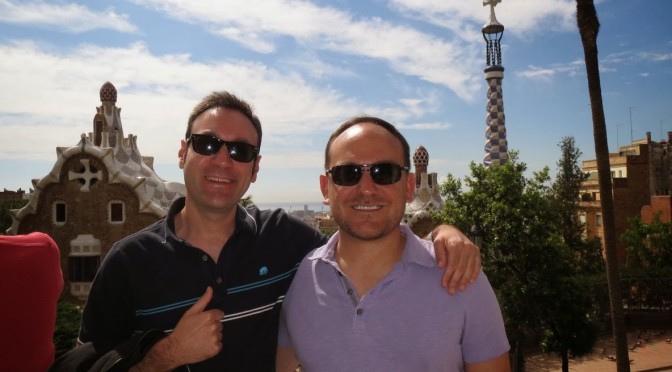 The happy day is finally here in that this will close out the posts from the 2013 Mediterranean Cruise that Larry & I took.  Yes, it has been almost a year in coming.  I’m not proud of this fact.  But it’s here and it’s probably almost time to figure out the big trip this year.  As I’ve prattled about elsewhere I’m sure, I think this year is definitely one geared towards something other than a cruise.  We’ll cruise again, maybe in a year or two, as it’s an experience unlike any other (and even with all the news about the cruises where everybody gets norovirus, neither of us are dissuaded from going on a cruise).  But this year?  I think it’s highly likely we’ll take on London – whether we pair it with Paris or elsewhere is the question.  I’d also love to go to Hawaii.  So we’ll see where fate takes us first.

But back to the post at hand!  Our second day in Barcelona and the last full one before flying back home awaits a recap.   To start, it was extraordinarily nice to just relax in our hotel room and sleep.  After the strenuous touring schedule of the day before, we didn’t have too much planned today.  The first objective this morning was something I’d not been to before, the Parc Guell.

Antoni Gaudi (mastermind of the Sagrada Familia and many other architecturally significant structures in Barcelona) was also the designer of this massive public park in Barcelona.   It was originally supposed to be a housing development, but that fell through.  It’s a fortuitous turn of events as it’s a wonderful park for just strolling and for getting amazing views of Barcelona, as it’s set pretty high up on one of the hills on the north end of town.  Larry & I took the very nice Barcelona subway to get to the park and schlepped a good distance from the closest metro station – and of course, it’s not only a schlep but also a pretty severe uphill climb too.  Ah well, it’s worth it.  As you can see, there are lots of fantastical elements to the Parc, whether it’s the Alice in Wonderlandesque entry or the many organic constructions found throughout.  The famous Gaudi dragon awaits you at the entry area and also can be found on our refrigerator at home as a magnet.

Park Guell is crazy and free

It was a touch crowded

Beautiful weather for a park walk

In the columns room

Looking back towards the gate and the city

More of the organic yet not

So cool to see a fake natural

The enormous Sagrada from Park Guell

We went west and can see back to the gateway

Barcelona’s skyline from the north

Looking toward the cruise docks

The Royal Palace and Magic Fountains

Up top on that scary summit

God won’t help if you fall

Great views from a precarious position

Larry back on terra firma

We got the refrigerator magnet

Tiles are all the rage

After having our fill of public parks and near-death experiences on treacherous monuments (see the pics for more on that), we headed back to the subway (downhill walking, yay!) and made it back to the area where the Block of Discord is, which houses numerous crazy houses, namely Gaudi’s Casa Batllo and the Casa Mila (aka La Pedrera).  We were visiting Casa Batllo this day though!

The Block of Discord area has apartment homes that have fantastical facades which seem out of a dream.  You can take a tour of the most crazy one, Casa Batllo.  I’ll let the pictures tell the story of what can be seen, as it really requires you to see it to believe it.  Let’s just say that the house feels alive.  There’s lots of playing with light and color as well throughout the house, which you get to explore by foot.  All 6 floors of it, even the roof.  It’s an amazing place to visit and I highly recommend it as a must-see if visiting Barcelona.

Another line, but worth it

The inside is completely nuts

Every area is built to feel organic and full of light

Looking out the window

Bright daylight streams in from above

The view of Casa Batillo from the lower courtyard

Looking toward the roof

It gets darker blue the higher you go

Up in the attic – it stays cool due to the construction

Looking down to the courtyard

Me and the holographic Gaudi

An Afternoon of Eating and Drinking

After our tour of the Casa Batllo, it was high time for some Las Ramblas lunchtime.  We found a place at the north end of the Ramblas that had an outdoor cafe with paella and sangria, which was quite enough to entice us to eat there.  It was delicious.  DELICIOUS.  Way too much as well, but it didn’t matter.  We were on vacation and it was Larry’s birthday, so why not?  It was a perfect way to get some rest, eat some good food, and people watch.  Once finished, we strolled the Ramblas back to our hotel, at which point we realized let’s just relax for the afternoon.  So we did, and headed up to the Hotel Espana’s rooftop bar for an afternoon session of getting shitfaced.  It was wonderful, as we had the rooftop to ourselves for quite a while, until other guests also got back from their travels and realized a drink on a beautiful day is a great idea.  After a while, it got pretty full and it was time for us to retire and get ready for our last evening in Barcelona.

A much needed rest on the Ramblas

At the Hotel Espana’s roofdeck bar

We were tired and just wanted to drink

These chairs are LOOKING AT ME

So sangria was drank

A Better Evening of Barcelona Strolling and Tapas

Last night’s dinner activities left a lot to be desired.  Larry found a restaurant online that seemed to be more our speed so we kept that as a final destination, but endeavored to also explore the southern reaches of the Ramblas leading to the Barcelona harbor.  Along the way you can see the Columbus Circle of Barcelona before heading to the touristy pier area called Port Vell.  It was a wonderful way to spend the early evening as the sun went down, as many people were out and the temperature was just right.  Our stroll eventually led us back to the desired restaurant, Caramba, which was back north and to the west of our hotel.  We almost missed finding it, even with all the technology on hand.  It was a great little restaurant though, with plenty of food available in tapas plates and even though we over-indulged yet again, it was worth it and awesome.

As we waddled back to the hotel via the small streets west of the Ramblas, I got a call from American Airlines: our flight to Madrid from Barcelona had been cancelled. YIKES.  I’m thankful I answered the damn phone!  Fortunately, the airline rep was able to rebook us on a flight from Barcelona to Miami, then from Miami to Los Angeles.  A final bit of stress before leaving, but it was all okay in the end as the next day, we did get home without incident!  It was just a long day and of course, the jet lag is a bitch to get over!

Out to find some better tapas

That’s our hotel in the background

The color is so pretty

Final Thoughts on the Whole Trip

Traveling for over 2 weeks can be exhausting and expensive.  With that in mind though, traveling for so long can provide a really exciting experience.  I admit that this year’s cruise wasn’t as fun as our first cruise, and I think it was for these reasons:

But overall, and as you may have seen in the previous cruise posts, we really have seen the hell out of most of the Northern Mediterranean ports, having hit Spain, France, a lot of Italy, Greece, and of course Turkey!  I highly recommend either of the itineraries (Eastern or Western Mediterranean) to anyone who’s going to cruise.  I think both Larry & my favorite areas are the Italian ports, as the food and scenery there is really spectacular.  That’s another trip idea for us in the future, just spending our time in various Italian cities, taking the train to move along….ah, that sounds freakin’ wonderful.

So glad to have been able to come back to Barcelona after a 10-year gap.  It’s a very enjoyable and cosmopolitan city with a wondrous artistic and architectural heart.  It’d be easy to spend many more days there.