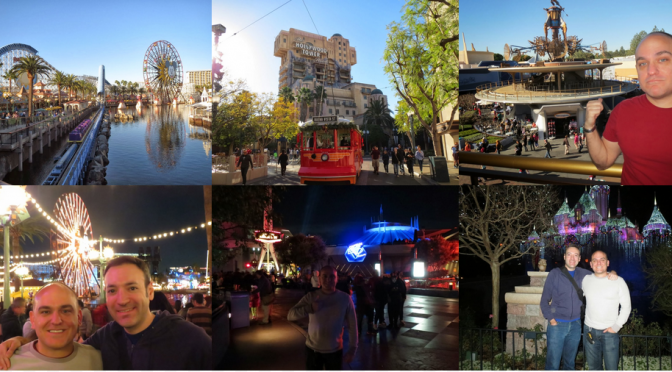 There was so much to see and do, especially now that there is a second theme park to explore in addition to Disneyland, called Disney California Adventure.  I say that like it’s a brand new park, but it’s just that I haven’t been there for at least 16 years (when I got free tickets to go there one night while in college).  Anyway, we had toyed with a couple scenarios, including going for two days, but we settled on just a supersized day of hitting both parks using a Park Hopper ticket.  We were certainly weary about the fact this time is one of the busiest for Disneyland, but we both felt the time was right.

In order to avoid spending a ridiculous amount of time waiting in long lines, I ended up searching online for strategies on tackling Disneyland and found an amazing site, ridemax.com.  For a subscription fee, you plug in the attractions you want to see as well as start and stop times and you get a customized itinerary based on known traffic and waiting patterns.  These itineraries proved immensely valuable and saved us a great deal of time waiting in lines, as it also includes strategic pick-ups of FastPasses for those rides that have INSANE lines.

We ended up going on pretty much every ride we had definitely wanted to go on and I must say that I’m a HUGE fan of Disney’s California Adventure.   The rides there are fantastic, the theming of the various areas is top notch, and at night, it’s just magical when all the lights come on.   And seriously, the rides like Tower of Terror, California Screamin’, and Radiator Springs Racers are simply fantastic.  Plus, we found a bar!  Much needed after a long day of schlepping and massive crowds and whiny children!

Here are my many many pics from the day – I’m also listing out the itineraries we ended up using based on the Ridemax plans as well as indicating when we deviated – it’s like a play-by-play for tackling both Disneyland and DCA!  Play along at home!

Dec 30, 2013: Our Trip Through Both Disney’s California Adventure and Disneyland

Okay, this part is absolutely not necessary unless you are me or possibly interested in a strategy in tackling both Disneyland and DCA in one day. I must say, that while it is a do-able task, it is fucking exhausting.  My feet still hurt.  I never slept so good as I did last night.  It’s quite a task – it might be easier to a do a 2-day 1-park-a-day thing.  But if you’re inclined towards a massive Disney overload here’s what we did.

Start Time:  We arrived at the Parking Lot just after 7:15am or so, and got to the main gate area right around 7:30.  This is pretty much on-track for our goal which was to be at the gates about a half hour before opening at 8am.

The advice from RideMax on doing both parks in one day is to take on DCA (Disney’s California Adventure for short – I’ll use that from now on) first, then go to Disneyland in the afternoon.  So we did.

The main strip through California Adventure

The Tower of Terror awaits

The line to get Radiator Springs Racers fastpass

can’t get just one

Enter if you dare

Inside the boiler room

The tracks are still there

Finally getting food at Tomorrowland

Back to Cars Land

Radiator Springs Racers in the distance

Even the fastpass line is still long

This is the final stretch of the ride – so fun

Sun is starting to come down

Under the Sea Little Mermaid pavilion

Larry was not a fan of this ride

Me and Larry at Paradise Pier at night

Another ride in at night

Went to the Cove Bar to get dinner and energy (drinks)

Tower of Terror through Bugs Land

Spectacular view of the Castle

Haunted Mansion – although it was the Christmas version

Getting on the Matterhorn

All in all, it was an amazing trip.  Would I recommend this kind of itinerary to everyone?  Nope.  But if you’re up for it, the above certainly worked well.  Just get ready for some sore sore feet and a back that is crying out for relief!