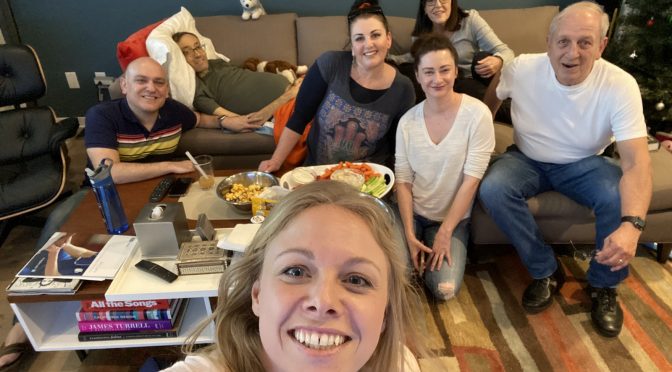 This morning started out with Alyssa leaving and saying her goodbyes with Larry one last time.   Later that morning, Stacie and Trent came over to visit with Larry.   It was a very nice time spent with them – I’m glad they could do so, as we were able to reminisce a little and just have a nice conversation with Larry.  They left before noon and we then got Larry downstairs.   It was very hard to have him go up and down stairs.   A nurse from True Care was coming at 1pm, and we also had Nicki, Sveta, and Mila coming over.  Not only that, I had been able to reach out to friends in the industry (George and Greg, effectively) about a Star Wars Rise of Skywalker screener and Greg had one!   He wasn’t in town on Thursday, but managed to FedEx it to us overnight so it got here in the morning today.  Not only that, but he also sent Uncut Gems, 1917, and Frozen 2. Unbelievable.  The nurse’s visit was good, and she encouraged us to move the hospital bed to the living room level, which honestly made the most sense so he’d have TV, be around everyone, and not have to deal with stairs anymore.  So we cleared out the area around where the Eames chair was, moving that over by the dining room table, and made room for the hospital bed to be relocated.  The highlight of the day was of course getting to watch Star Wars!  It was a lot of fun, a lot of the criticism is warranted, but it’s still one hell of a ride.  Very enjoyable, but still like The Last Jedi the best of this new trilogy.  Larry couldn’t really stay awake for most of it and was in and out, but I tried my best to keep him engaged.

Afterwards, we all just had a pleasant evening hanging out, drinking wine, telling stories, lighting Hanukkah candles, laughing, crying, playing Cards Against Humanity, eating Taco Bell.  I love my friends so much and they’ve been a godsend in this.  I don’t know what I’d do without them, as well as Fran and Joel obviously.   It was the first night that Larry spent down in the living room and I slept on the couch near him.  It wasn’t easy.  He peed once in the night which went well as I had him stand up, but the second time he did it laying down into the urinal and it was a mess.  Had to change the bed, do the sheets and his clothes, change his clothes to be clean, and then finally put him back to sleep.  I’m a little tired today (Sunday).