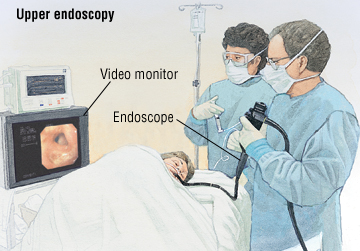 “Dr. Cole said that I wasn’t going to need any sedation, just a gargle of something.”  The nurse gave me the briefest of a confused glance but continued the steps of getting me ready for my upcoming procedure.  I was at the Santa Monica UCLA Medical Center and in a few short minutes, I was going to truly understand why I got that glance.

I’ve been having problems over the past few years with swallowing certain foods.   I’ll be eating stuff like chicken or rice and after a bite or two, I’ll feel a blockage at that point where your esophagus meets your stomach.  It’s a total blockage and further food or liquid gets trapped in my throat, and I basically have to throw up.  The blockage sometimes can get dislodged by a forceful swallow of water, but oftentimes, that isn’t enough.  So I spend the next few minutes waiting for the sweet release when the food moves into the stomach, as that means I can typically eat again.  In 2010, this sensation hit its apex when the food would just not pass into the stomach, even after an hour or so.  This experience was the worst I’d ever had it and I went to the ER when I realized this was very scary.

After that NYC Hospital experience, I went to see a GI specialist and based on my symptoms (dysphagia – a fancy word for can’t swallow food), he thought it could be Eosinophilic Esophagitis or something called a Schatzky Ring.  It was then when I had my first upper endoscopy experience, although delightfully, it was one I don’t remember as I took the drugs.  There’s that mild discomfort of the IV but no sooner are you wondering when you will pass out, you’re OUT.  Really, the only thing you know is that you’re waking up and sorta confused.  This, my friends, is a good thing.

I found out at that time from the GI doc that he didn’t think it was either the Esophagitis or a Schatzky ring, as he saw no evidence of that.  He had also done biopsies on the tissue there to make sure it wasn’t cancerous.  Nothing.   I got sent to an allergist and found out there, after many uncomfortable pokes in my arms, that I’m slightly allergic to tofu/soy and strawberries, in addition to the severe tree nuts allergy.  So really, I got nothing out of this.  Over the next 3 years till now, I have just had to be prepared when eating chicken or similarly-textured meat.  Sometimes I’ll be fine or figure out to swallow water at the right time to ensure the blockage breaks up quick.  Other times?  A run to the bathroom to throw up and then try to keep calm and hope the blockage goes away.

Larry convinced me on my most recent doctor’s visit to re-address this issue.  So I did, as honestly, I start to dread going out to dinner as this sensation has a 50/50 chance of happening.   Throwing up in public is SO not cool.  My doc referred me to a GI specialist within the UCLA medical system; Go Bruins!  Dr. Cole listened to my history and I was/am optimistic.  He first wanted me to have an esophagram (doesn’t THAT sound fun?) followed by an upper endoscopy.  I asked if the endoscopy was going to be with me “going under” – Dr. Cole enthusiastically said it wasn’t necessary.  “You can gargle this fluid that numbs your throat and you’ll be fine.”  He reassured me that it’s how he would do it if he were having the procedure done himself.  “You’re hardcore,” I joked.  I was right.

The esophagram process was the first procedure, and it was fairly benign.  Step up in a giant X-Ray machine as you can see here (this is my picture of it – it’s quite immense) and then drink some chalky barium.   Then you have to drink this fizzy mix that the doc and technician both plead for you NOT to burp.  I managed to keep from burping but it was far from easy – it had been like chugging a 7-Up.  Regardless, this was a pretty easy thing and I just had to deal with ridiculous bowel problems the rest of the day.  Barium is not your friend.

Next up was the upper endoscopy the following week.  The procedure that I had been talked into NOT taking the sedation for.  I didn’t really think about it that much until the night before.  Then I started to get a bit nervous.  Hell, even if I was taking the drugs, the sensation of anesthesia is enough to freak me out a bit.  WHAT IF I DON’T WAKE UP?

At the hospital, I was checked in and the nurses got right to work prepping me.  As they were confirming with me what I was having done, the sedation question kept coming up.  Every time I told them the same thing, that my doctor had told me that I wouldn’t be doing that.  Every time I got that lightning-quick puzzled expression.  One nurse hooked me up to an IV, which I wasn’t sure what it was for, and it turns out, it was for nothing!  Yay for random track marks in your arm.  She had just assumed I was going under.  I should have gone with it.

You see, this is what it looks like when you get an endoscopy.  After all the prep, the time comes when the doctor arrives and commences with the fun.  The first thing is gargling the witches’ brew within an inch of your life before swallowing it.  I’m guessing that would have been bad.  Sure enough though, the brew worked and I felt the back of my throat going a bit numb.  I even drooled on myself and into a napkin as I hadn’t managed to spit out all of the brew.  You then get a mouthpiece which has a non-biteable hole in it for the tube while also keeping you from biting yourself or getting in the way.  So yeah, torture.  Then you see the tube.

Dear God, the tube.  You see the bottom length there in a nice big coil.  ALL OF THAT GOES IN YOUR THROAT.  So the doc puts the tube in your mouth through the mouthpiece, then asks you to swallow hard when he asks, as that is when the tube is going to pass through your epiglottis.  It’s time to swallow, and sure enough, the tube goes cleanly in.  And despite the gargled brew, the sensation of a half-inch tube jammed in my throat isn’t magically numbed away.  I feel that persistent pressure for the next 5-7 minutes as the doc continues feeding the tube in.  The tube’s progress never seems to end.

I believe the intention is to start at the lowest point and work the tube back up, taking video and exploring the magic of the esophagus the entire time.  I’ve attached this map I found online that shows just how far the tube goes.  I know that my procedure didn’t involve going all the way into the small intestine, so perhaps I’m over-dramatizing just a bit.  Whatevs.  I felt the tube going all the way down into the stomach and wouldn’t have been all that surprised to see it…well, I will try not getting too crude.  The doc then says, “I’m going to now fill your stomach with air so this may feel weird.”  OH?  Now it’s time for weird feelings?  Sure enough, my stomach got filled with air and I got to feel what a burp feels like when your entire upper digestive tract is pried open.  I do believe that I started to freak out just the slightest at this point, at which point both the doc and the attending nurse had to pat me on the head and ask me to breathe and calm down.  I will admit that once I focused on breathing regularly, that helped me to ignore the severe discomfort of a tube being jammed down in to my stomach.

Over the next few minutes, the doc proceeded to explore my esophagus and stomach, and then it was time for some biopsies.  What does that involve?  Shoving a fine piece of wire with tiny serrated edges into the tube (you can see the entry point there in the endoscope picture as that little 45-degree offshoot on the upper right) and then doing a brief jerking motion with the wire to rip some of the tissue off.  It’s very small.  But the noise is very dramatic and trust me, you can feel that the next day or two.  I remember that was the case as well in my 2010 procedure.

Finally, it was over and he removed the tube.  I didn’t miss the sensation.  Especially as I started burping like crazy all the lingering air and then drooling like an idiot.  But that was my experience with undergoing an upper endoscopy without the sedation, and all I have to say is, I liked the unconscious way a lot more.  My recommendation to you all?  Take the Drugs.

As for the 2013 diagnosis and projected treatments?  TBD.  I have a followup on Monday to discuss all that.  But the doc seemed to think it really is Eosinophilic Esophigitis.  So we’ll discuss that and the next steps then.