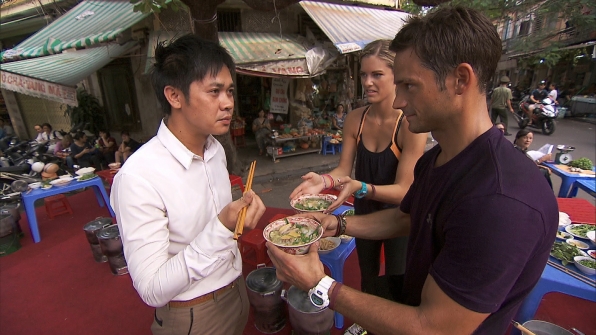 Have notes, will a post get written! Â It’s obviously way late, which of course is silly to say because “late” implies that someone out there is reading this. Â I almost gave up on doing these recaps, but you know what, I like writing these things up as well as drawing the maps and updating my leaderboard. Â It’s good practice for when Big Brother starts back up!

Anyway, we finally had some interesting, and by interesting, I mean non-glamorous, scenery when the Race took everyone to Hanoi, Vietnam. Â It’s nothing like an India leg, but I’m glad to see a little bit more of the non-vacation type spots. 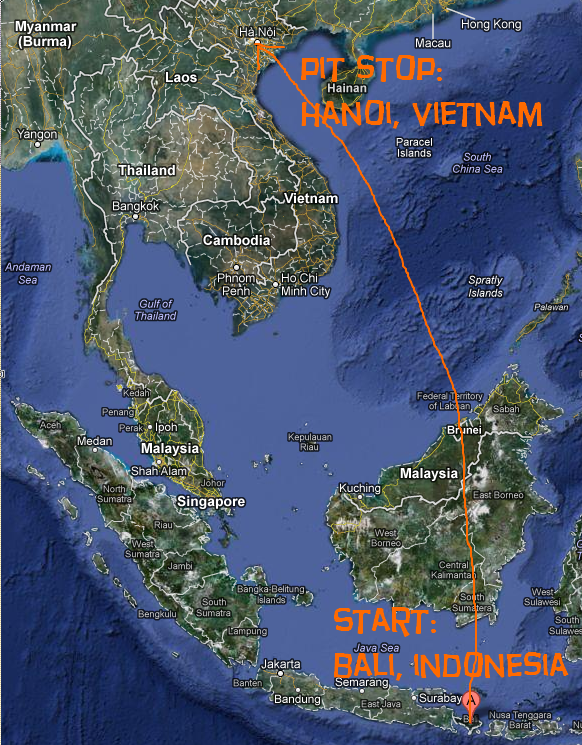 This leg started off unlike many others though, as while the front-runners Connor & David headed out first, they ended up going directly to the Hanoi Pit Stop where Phil clearly knew this was coming and allowed them to self-eliminate (aka quit) because of David’s broken Achilles. Â That definitely sucks for them, as they probably could have gone quite far.

Clearly the whole Alliance thing is a factor for these teams in this season. Â Eh, what can you do? Â To me, it’s mostly a silly thing to try to form and adhere to – only one team can win and there is no “voting” that you have to concern yourself with. Â I DO see a benefit when it comes to possibly sharing information about challenges but never at your own expense. Â I also see the benefit of an alliance when it comes to the dreaded Double U-Turn. Â Which of course was the thrust of this leg’s drama, as once that information was revealed to the teams at the Start in Bali, the alliances immediately began plotting.

On one side, we have the rapidly diminishing alliance of Mona & Beth and Joey & Meghan. Â John & Jessica had been part of their alliance as well, but as we amusingly saw, they were eliminated. Â WITH AN EXPRESS PASS IN THEIR POSSESSION. Â Ugh. Â I was not alone in my disgust or contempt, as Max & Katie were openly shocked at that fact when they found out while everyone waited at the Bunch-Up. Â I began to like Max & Katie, especially when M&B and J&M were completely appalled at how callous M&K were towards J&J. Â OH FUCKING PLEASE. Â I so am over Joey & Meghan…but I can’t completely hate on Mona & Beth. Â I like them. Â I just wish they hadn’t entered an alliance with those other two useless teams.

Unfortunately for that little alliance, all the other teams are like, p’shaw. Â This loose alliance of Everyone Else basically decides that with the upcoming Double U-Turn coming up, it’s imperative that whoever gets there first use it on either Mona & Beth or Joey & Meghan. Â  The game is afoot! 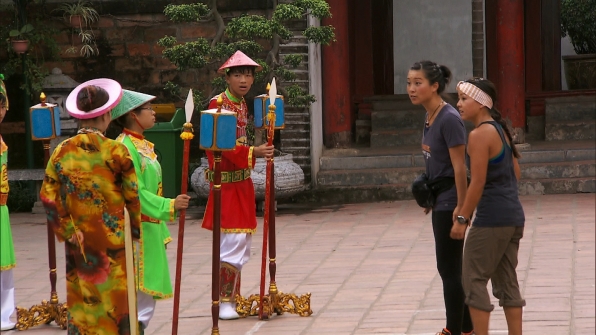 Pam & Winnie are blowing my mind. Â After a very uneven few first legs, they are starting to seriously dominate here, especially with Connor & David out. Â They’re the first to knock out the Roadblock at the WTF-was-that-Communist-performance-song&dance challenge. Â They did it handily as one of them is a graphic artist and she was able to tap into her visual memory skills. Â The other teams were stuck for a few more rounds, giving Pam & Winnie a huge time advantage. Â They then plowed through the cool little dancing sticks thing and got right to the Detour, way before everyone else. 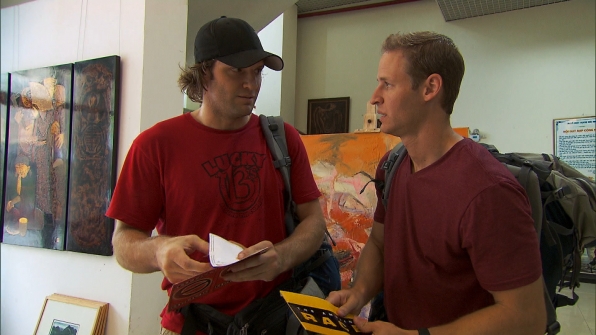 At the Detour, you could either “Make Your Move” or “Make Your Meal” – Pam & Winnie went to the Make Your Move challenge which involved a human chess board. Â They rapidly figured it out and got to the U-Turn first, and they, without hesitation, U-Turned Joey & Meghan. Â Bates & AnthonyÂ were neck-and-neck with Joey & Meghan at the Make Your Move challenge but J&M got out of there first, thereby preventing a clean sweep in the U-Turn of the remaining mini-alliance. Â Joey & Meghan then decide to U-Turn the Walmarts (Chuck & Wynonna). Â Wha???? Â Of all the people to U-Turn, that’s who you choose?!? Â I really didn’t understand the logic there as while there’s no way Joey & Meghan could have known how poorly that team was doing anyway, you WANT to have a weak team stick around instead of a strong one. Â Not that I would have liked it, but it would have made sense to U-Turn Bates & Anthony, since you know that they were behind you. Â Or maybe Max & Katie even, since you were so pissed at them earlier. Â Really didn’t make sense.

So we’ve got Joey & Meghan and Chuck & Wynona U-Turned….and Chuck & Wynona still haven’t even arrived at the Detour in the first place. Â Le sigh. Â It’s almost comical to watch Chuck & Wynona passive-aggressively try to make it through these legs. Â I guess they’re harmless and I do almost feel sympathy when they’re struggling, yet they’re just a really weak team. Â In watching The Amazing Race for pretty much 18 seasons in a row now (I started religiously watching in the middle of Season 4), I know what I like and that is this:

Anyway, the other teams scramble in to the Pit Stop before the two U-Turned teams finish up. Â It’s not even stressful for Joey & Meghan as they ARE good competitors, even if they have the misguided malice towards the other teams. Â He will even grow up to be more attractive, but right now, he’s way too young and SQUEE for me to appreciate his looks, which has no bearing at all on what my point was, which is that Chuck & Wynona are in no way competition. Â But none of this really matters, as since David & Connor self-eliminated, NO ONE WAS IN DANGER OF ELIMINATION. Â For the sake of the show, it was good the teams didn’t know that, but seriously, the stakes were gone. Â I’m supposing this was a non-elimination leg anyway since we still haven’t had one yet, but I wonder if it means they still will have 3 of them in the future?