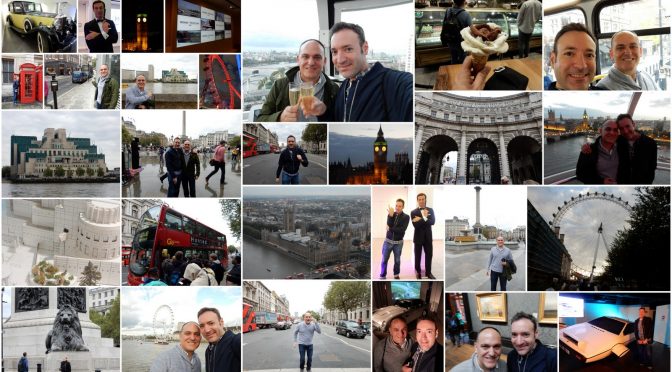 <– Previously, we’d been bussed all around Southern England!

This was a fun day.  We were able to sleep in a little bit (not much), as we had tickets to the London Film Museum’s exhibit “Bond in Motion” – a collection of Bond cars and vehicles from throughout the movies.  Started at 10am, which was our window (although from having visited there now, I don’t think it was quite necessary to buy the tickets in advance; better safe than sorry).  So we got a quick breakfast in at the nearby Starbucks, then walked over to the museum.  Yeah, walked, as our hotel is so centrally located.  Walked through the West End, seeing the theaters for Aladdin and Harry Potter on the way there.  It was also raining slightly, which was about time as London is supposed to have some rain! It also was nice for it to be cool a little as it’s been pretty damn hot/warm here and in Paris! 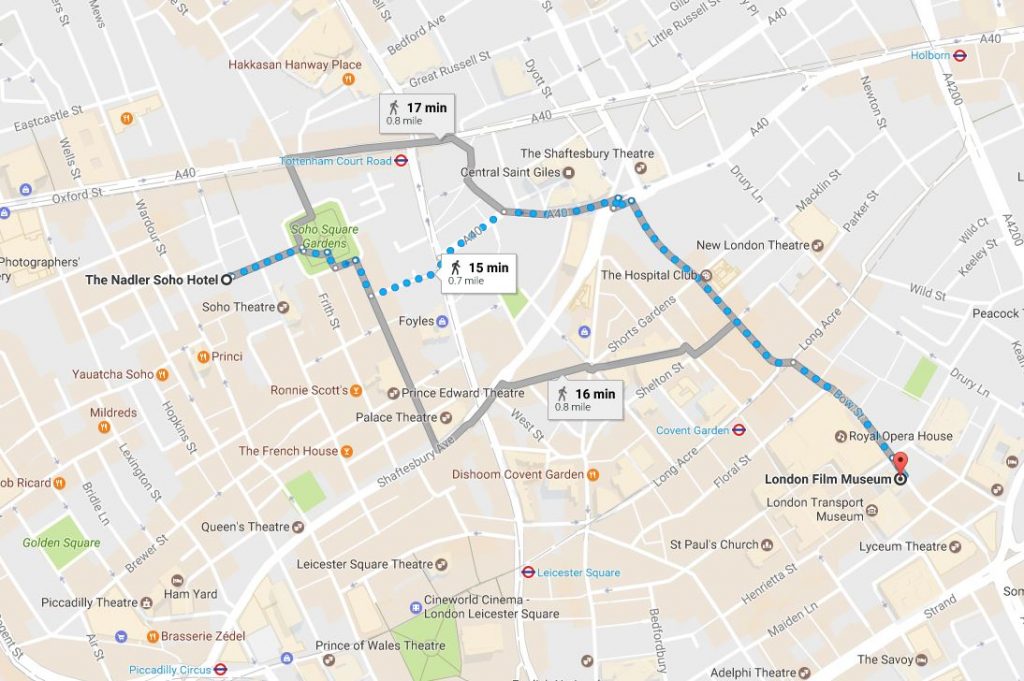 Anyway, we got to the exhibit and it was absolutely amazing.  Everything was laid out in a great fashion and there were so many important cars to the series present, from the Aston Martins, the Rolls Royces, Jaguars, etc.  Quite amazing, and I took lots of pictures.  Larry bought lots of cool things too, including the guide book.  We also got a few shots with the life size Connery mannequin up front.  Just spectacular the whole thing.  Well worth coming to London for!!!!

So….let’s try to break these pictures down in some kind of order…first, getting to the London Film Museum via the route shown above:

A rainy start to our day in SoHo

Rainy conditions won’t stop us from taking a pic

Didn’t make it to this sold-out show

Our destination – the Bond in Motion exhibit

The Foyer of the Exhibit:

Awaiting us in the lobby – a Sean Connery Bond mannequin

There were great clips being shown throughout

MI:6 Mock-up from The World Is Not Enough:

The MI:6 mockup used when planning The World Is Not Enough’s opening scene

The part of the building where the boat launches from

You Only Live Twice:

The “Little Nellie” autogyro from You Only Live Twice

Little Nellie from below

The boxes that held Little Nellie in You Only Live Twice

Heading down into the main exhibit…

The main floor of what was shown was simply spectacular.  Almost every vehicle you’d expect to see was there, seriously.

A View To A Kill:

The Aston Martin DB5s shown here had a model version based off of the Goldfinger one, as well as a real car that was used in Goldeneye.

Us with an Aston Martin DB5 – from Goldeneye, we think

It’s the same model of car that was also in Goldfinger, as you can see in the movie in the background

The Rolls Royce Phantom III from Goldfinger – what a car

Larry with the fold-up jet from Octopussy’s opener

Octopussy’s Tuk-Tuk Taxi from the drive through India

The World Is Not Enough:

On Her Majesty’s Secret Service:

Another view of the Mercury from OHMSS

The Ford Mustang Mach I from Diamonds Are Forever

Map Tokens for Diamonds Are Forever

The Spy Who Loved Me:

The submersible Lotus Esprit S1 from The Spy Who Loved Me

Very cool to see this

Inside the Cars from Spectre part of the exhibit

Another view of the Jaguar

Some promotional stills from the latest Bond movie, Spectre

For Your Eyes Only:

The Neptune 2-Man Sub from For Your Eyes Only

What remains of the Citroen 2CV from For Your Eyes Only

The Man With the Golden Gun:

The really jacked up Aston Martin DBS from Casino Royale

It did a lot of rolls to look like that

Just saying – this was the best collection of James Bond cars you could ever hope to see.

But that wasn’t the end of our James Bond adventures today.  So after the London Film Museum exhibition, we came back to the hotel to drop off the new goodies we’d just bought, then headed back out to Charing Cross Station as at 2pm, we were joining up for a James Bond Walking Tour!!!  Holy crap, this is quite an amazing and somewhat grueling walk, as you walk a LOT.  Starting at Charing Cross, you get some insight into how the underground sections were used quite frequently, especially for the chase scenes in Skyfall. 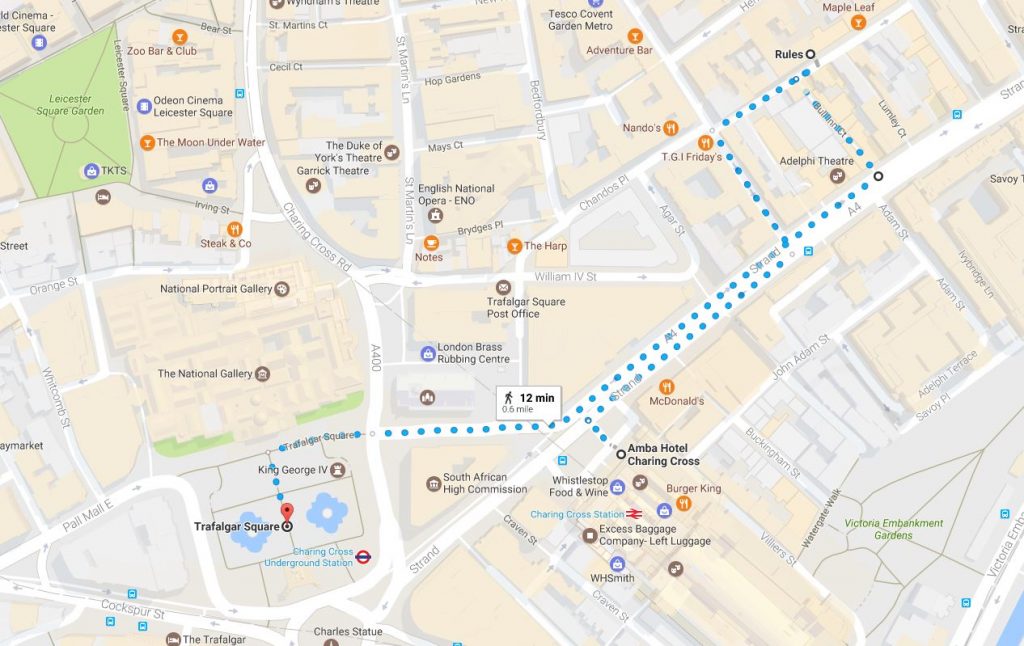 We then meandered through London to various locales that were used in Spectre and Skyfall before heading to the National Gallery Museum right near Trafalgar Square.  Got a lot of backstory on the filming there as well as the use of art, especially in Skyfall.  The use of the various paintings, combined with the accounts of Admiral Nelson in the battle of Trafalgar and how those were analogous to James Bond and M’s demise….holy shit, it was amazing.  Then when in the National Gallery (didn’t know we’d be going in there!), we saw not only where Q and James Bond meet for the first time in Skyfall, but also the painting that James Bond notices in Dr. No, which at the time in the 60s had just been stolen.   AWESome.

Heading to Charing Cross for our James Bond Walking Tour

You have to take this shot. It’s the law.

Making our way back into the West End

I’m everywhere – as is my name

Charing Cross Station was used a lot in Skyfall

This staircase is featured in Skyfall

Off to Trafalgar Square

Trafalgar Square was our next stop

and we were about to go into the National Gallery

Us in the Square

And Inside the National Portrait Gallery

This portrait is one of the items that Dr. No stole in Dr No

This Joseph Turner painting, The Fighting Temeraire tugged to her last berth to be broken up, holds meaning and was in Skyfall

The museum interior is beautiful

After leaving the museum, we walked through Trafalgar Square and over to the Admiralty Gate which faces Buckingham Palace.   These were the scenes of other M:I6 locations in the movies, which was a lot of fun.  The guide was just such a great source of knowledge and energy! 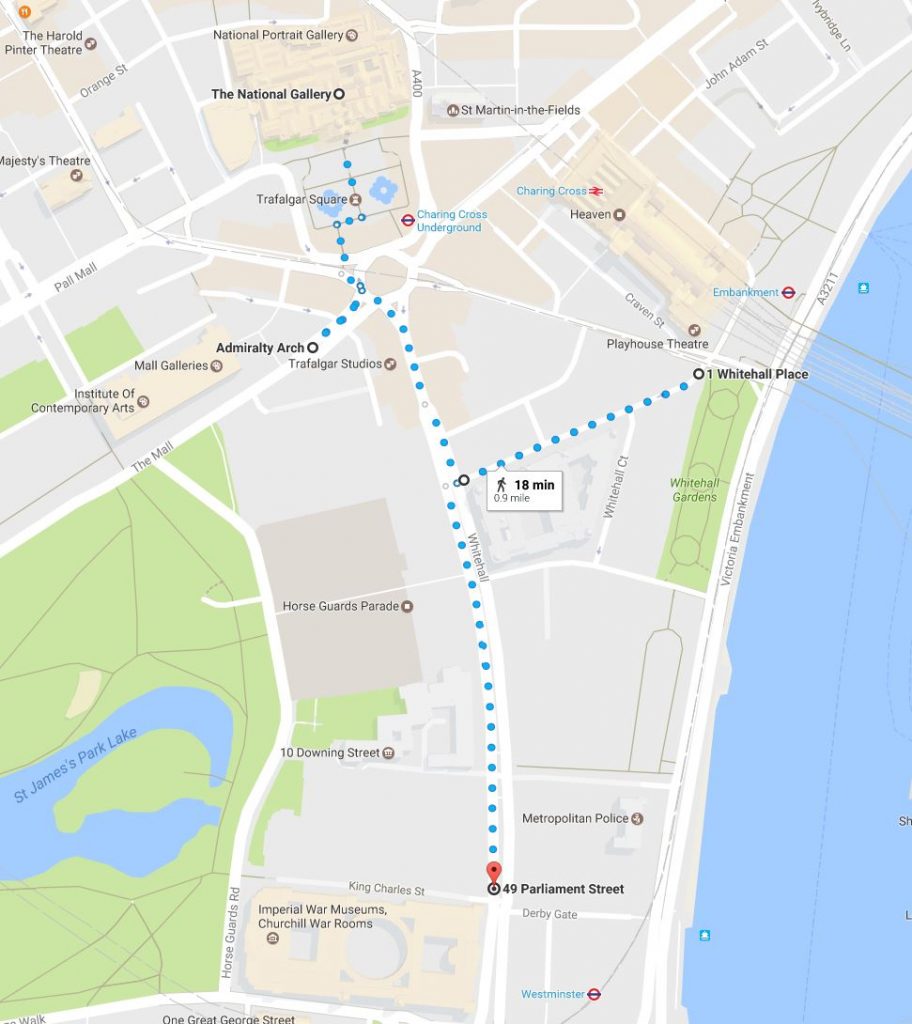 We then walked over through the Whitehall street area which is a huge place for Skyfall, passing 10 Downing Street too.  After getting a great shot in the middle of the street that matches Bond’s chase of Silva down the street, we all then hopped on a red London Bus (which I’d been wanting to do!!! Score!) and rode the route down to a station right across the Thames from where the MI:6 building actually is and what you see in the movies.  That was where the tour ended, and it was just a blast to have gone on it.  Seriously.  Amazing!!!

Through Trafalgar Square to the Admiralty Gate

Bond exits this way in Skyfall

One of the lions in Trafalgar Square

Walking Around the Whitehall Area:

Here we are in Whitehall

which is very much a government-focused area

Can’t remember what this exterior was used as

Oh – that’s the rooftop from the end of Skyfall

And then near 10 Downing Street, with some Action Shots:

This is 10 Downing Street, where the Prime Minister lives

so now we’re in the middle of the street

and so of course, we had to recreate the pose

The double-decker red bus took us down the Thames so we could get the across-the-river view of MI:6.  It was awesome.

MI6 along the Thames

We got to ride a double-decker bus to the next location!

So exciting – I’d wanted to ride one

Our destination was across the Thames from the MI6 building

It’s obviously been made famous in the Brosnan and Craig Bonds, up until Spectre that is

Those apartments are insane looking

After the tour, we were on our own to get back

ooo, the Shard from a great distance

Such a striking building – want to visit it one day

Look at these places – kind of over the top

The day wasn’t over yet!

We walked across the Vauxhall Bridge to the Tube station there, taking it back to the Westminster area as we had a Champagne Experience on the London Eye at 7.  But that wasn’t for a few hours, so we ended up finding a place called Slug & Lettuce to eat at, which was a bit of a more corporate looking place to eat.  It worked for us, although the food wasn’t anything special to write home about.  After that, we got checked in at the London Eye for the Champagne Experience, which was okay.  The time was good as the twilight was ending and the lights were coming on, and we got a glass of champagne and the host was very helpful with taking pictures of us.  It was a good time but we were definitely getting tired.

Heading Back to the London Eye Area

After a brief tube ride north, we were back at the Westminster area

And the London Eye was our next destination

The Champagne Experience on the London Eye at Sunset

About to board our Champagne Experience pod

The London Eye has a spectacular perspective of London

We were enjoying the time, but it was a bit packed in there

Pretty cool shot of Parliament and us

Inside our Champagne pod

We’d been on our feet most of the day, but that didn’t stop us from walking back to see what’s what.  We crossed the Golden Jubilee Bridge and then meandered through the West End and SoHo again, finding Chinatown this time as well as the gay bar area.

Oh yeah, also found a gelato place that made the coolest rose formation of ice cream in a cone for you.  It was delightful, and Delicious.

The Aquarium all lit up

Closer to the Jubilee Bridges

Up on the Jubile Bridge

then walked through Chinatown, which is right next to the West End and SoHo

That was an action-packed day, to say the least.