When last we spoke, I was headed to see Margaret Cho at Radio City Music Hall! Well, that was an incredible, fun experience. It was great to finally see the inside of Radio City, and I’ve just got to say that is one big mofo theater. Margaret Cho and her opening act were hilarious. The first words out of Margaret’s mouth: "I fucking hate Sarah Palin!" So you kinda know you’re not in Alaska at this point! She touched on politics for a little bit, but Margaret’s favorite topic is most definitely sex. Sex sex sex. Did I say sex? Because if I didn’t, well, Sex! Hilarious though. Not for the easily offended, for sure. But the venue was packed and everyone was laughing their ass off.

The next day, Larry and I were going to go see ‘Rachel Getting Married’, but discovered that at the theater it was playing (out of two in the city), there was a ginormous line around the corner. I had no motivation for that kind of packed experience, so I suggested it was time to do something else, so we headed to South Street Seaport. It’s a touristy area right down by Wall Street in the downtown area of Manhattan. It was pretty cool though, and a decent way to spend a Sunday afternoon.

Then it was back home for me and time to watch The Amazing Race that evening because I do have my extracurricular job where I write about the extra video clips on the CBS website! The racers this year are for the most part, idiots. It’s still entertaining though. Crazily enough, I haven’t been watching Survivor this year. I’ve DVR’d it and am ready to watch it, but so far, I haven’t. What the hell?

Yet the most exciting and awesome thing this week has to be the fact that this past Tuesday evening, I saw Madonna in concert!!!!! Redonkulous. I’ve wanted to actually see her in concert for so long, but typically, I’ve never been with people who would be willing to go see her and pay for the privilege too. Luckily I now have such a person: Larry! A few weeks ago I picked up two tickets for not too horrendous of a price because I just couldn’t NOT go to her concert yet again. So Larry & I headed to Madison Square Garden and well, basically got blown away by her amazing show. Madonna knows how to put on a fantastic and entertaining concert. She has so much material to draw from, and while she definitely focused this concert heavily off of her most recent album, Hard Candy, she mixed it with many of her previous songs. Better yet, she doesn’t just sing cover versions of the songs as heard in the albums. Instead, she always reinterprets the songs so that you’re never sure what to expect. Here was the setlist:

There was no encore, but there was kind of a tease because after she disappeared backstage, the same volume of music started pumping out Holiday, but alas, it was just music to get usher us the hell out of there.  🙂  Overall thoughts:  I went in expecting to be disappointed, which I’m embarrassed to admit.  I figured it just couldn’t live up to my ridiculously high expectations.  I was proved completely wrong.  Madonna puts on one helluva concert and even though she’s 50, I don’t see any signs of her slowing down.  Rock on, Madonna!

And that brings me to today!  I’m still kinda sleepy because I just haven’t been getting to sleep until midnight or so every night.  This week has been hectic and crazy, but also because of writing about those Amazing Race videos, I stay up late.  Whatever, you only live once!

In upcoming news, it looks like I’ll be heading down to the DC area with Larry to go visit Jeff Crepeau for the Columbus Day weekend.  Yay!!!!

And in a few short weeks, we’ll be heading to Vegas to finally see Mom and help her celebrate her birthday!!!  Yay!!!!!!!!!!

One of my coworkers has the official DVD that NBCU put out for the Olympics and he took some screenshots of the end credits, because in the DVD version, they put the entire team that was involved in the Olympics, not just the main Beijing folks (who were the ones that got props on the broadcasted credits). And lo and behold, my name is in there. Kinda surreal. 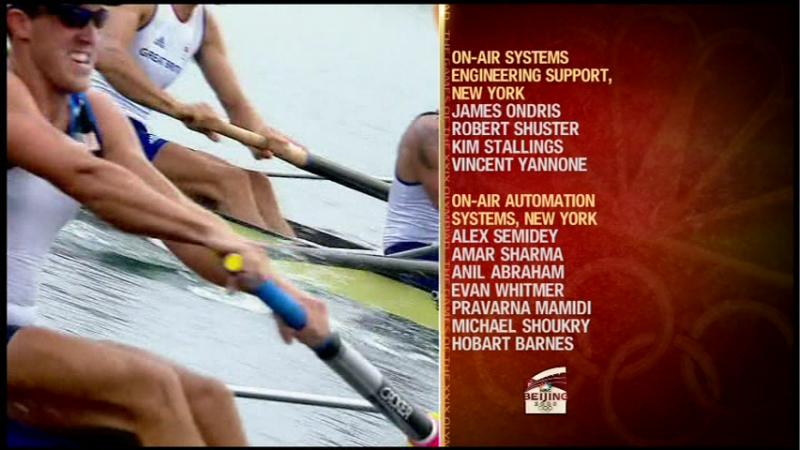 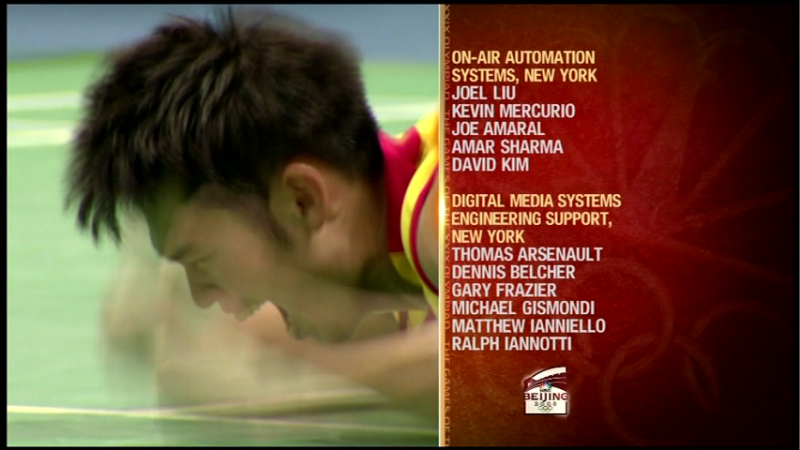 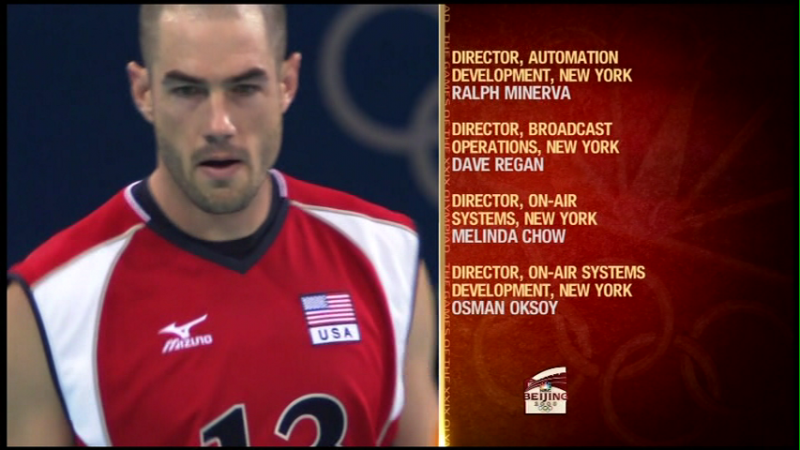 I wonder if this gets me entry into some kind of writer’s guild where I can strike and demand profit participation. 🙂

Ah geez, some of the videos up on the Internet are just so wonderful. And maybe I was one of the only ones watching the Emmys yesterday, but there is a clip from the HILARIOUS Jimmy Kimmel show below that I apparently missed, with Jimmy interviewing Michael Phelps. Here’s a sneak-peak scoop of Phelps’ splash into the world of Grey’s Anatomy – AWESOME:

I certainly wouldn’t mind having Dr. McSwimmy as my primary care physician. But the speedo is the only approved uniform.

AnYWAYS, so here we are. It’s now Autumn, YAY! I most definitely prefer this season to all others, as you get to wear jackets and it’s not hot so you can sleep at night and I love a chill in the air. I think I’m most happy about the jackets part though.

So while walking to the Ferry terminal this morning, I see this guy walking towards me on the sidewalk I’m currently on. Normally I’m good at minding my own business and just jamming out to whatever song I’ve navigated to on the iPhone – but this morning, something just caught my attention about this guy. Now before you get all gay’d out and think I’m going to describe some hotness coming my way…well, you’re wrong. This time. What I noticed about this guy was the way he was walking – he was literally walking like those Show Ponies that walk by lifting up their hooves real high and goofy-like as if they’re stepping over a bar that’s a few inches off the ground. And this guy was totally the Prancing Pony this morning. I really had to try not to just stare becasue I really wasn’t positive if he was just fucking with me to see if I’d react or not. My consensus is that he really was just oblivious and that he walks like that. If so, Bud should make a ‘Real Men of Genius’ commercial about Prancing Pony Man.

Ah, that feels better to have written that down finally, as when I saw that guy this morning, I knew I HAD to write about it.

Anyways, so how about that economy? Whoooo doggy. But I was very relieved to find out that Lehman Bros’ employees will still get to have access to their $2.5B bonus pool. Whew. As someone blogged about on the Huffington Post recently, we really are, ONCE AGAIN, witnessing history. And this is one of those pivotal moments in American history that will definitely influence whether or not we’ll succeed as a country. But fear not, for as John McCain stated, the Fundamentals are still strong – you know, the American drive to succeed and second-to-none skills of our workers….. LOL. Who are these people and where is this drive to succeed? There are precious few of those fast-burner types left and to be honest, most who are like that, well, they’re the ones who have come from outside our country to do better for themselves. I think our country still has (or had, who knows) an image for the world that you make of yourself what you will. And people come to that. But those who are born here and coddled to not have to do a thing for themselves (and that is not a liberal or conservative slant in this statement – it’s just calling out laziness and apathy), what’s the motivation? There is none. Ugh, I don’t even know what I’m trying to make a point out of. It’s just so frustrating – almost all of the news is so mind-numbingly infuriating. I can vote, and I will, but there’s so much wrong right now that it’s just….frightening. What can even one man, whether it’s Obama (who is obviously getting my vote) or McCain, really do? Leadership didn’t get us into this mess, and I fail to see how leadership will get us out. As Andrew Sullivan and Bill Maher kinda said on Real Time with Bill Maher, we got into this whole mess because Americans are greedy and willing to do things that are utterly stupid and completely contrary to what any common sense would have you do. Another quote from Real Time that I absolutely loved is: Americans will always do the right thing, only after every last other option has been utilized. It’s so true. Am I lording it from up on high? Of course not, but I really don’t know what it’s going to take to get our country on track. I believe that Obama is a good choice to serve as a catalyst for change – he wants you to get out and make things better by doing things yourself and for your community, and that speaks to me. I respect that mentality. I have yet to hear anything from the McCain campaign that isn’t basically whining or accusing Obama of something or another. OY – this was a long rant. end rant now.

alright, back to your light-hearted gay ramblings from an awesome guy named Hobie. Larry and I hung out this weekend and had a fantastic time. Sunday we walked up a mile or so from my place to this restaurant that had an outdoor bar on the river. It was fantastic, especially when after the first two rounds of beer, the bartender just started giving us beer. I only was thinking it was gonna be one round, but surprise, surprise, another round quickly followed, in BIGGER glasses. Yes, Larry and I ended up having a great Sunday afternoon buzz. Woo hoo!

October is going to be a great, fun month. On Oct 4, we get to see Margaret Cho at Radio City! woot! Then on Oct 7, I finally get to see MADONNA in concert at Madison Square Garden!!! woot woot!!! Larry and I then fly out to Vegas to celebrate my Mom’s B-day Extravaganza in Las Vegas (I’m schooling Larry on how to play Blackjack – yes, I know, I’m a good boyfriend) at the end of the month. And in February, we just bought tix to see Kathy Griffin at MSG. NYC rules.

I think I’m done with this post. Peace out.