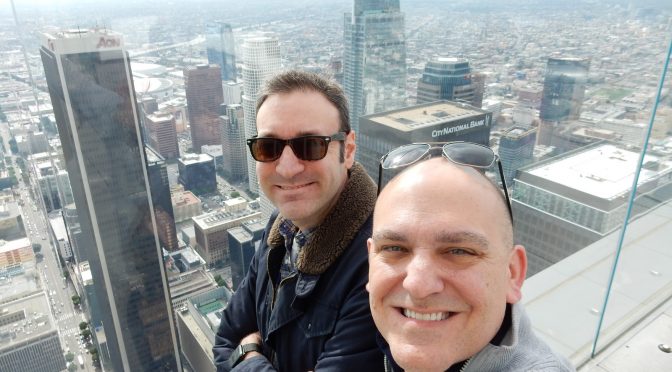 Larry and I have had a few previous downtown days, with some being harmless fun exploring the sights….

…in which we looked at some potential apartments as well as the MOCA and Union Station; and then a trip in which it was pretty much a pub crawl….

….it did start out educational as we saw the Space Shuttle, but then it became pretty much an exercise in drinking around downtown LA.  It was awesome.

So today was a bit random, as I just proposed going downtown to the Skyspace experience on a whim.  I didn’t want to sit home and there were no good movies out, and after proposing it, Larry agreed, and off we went. 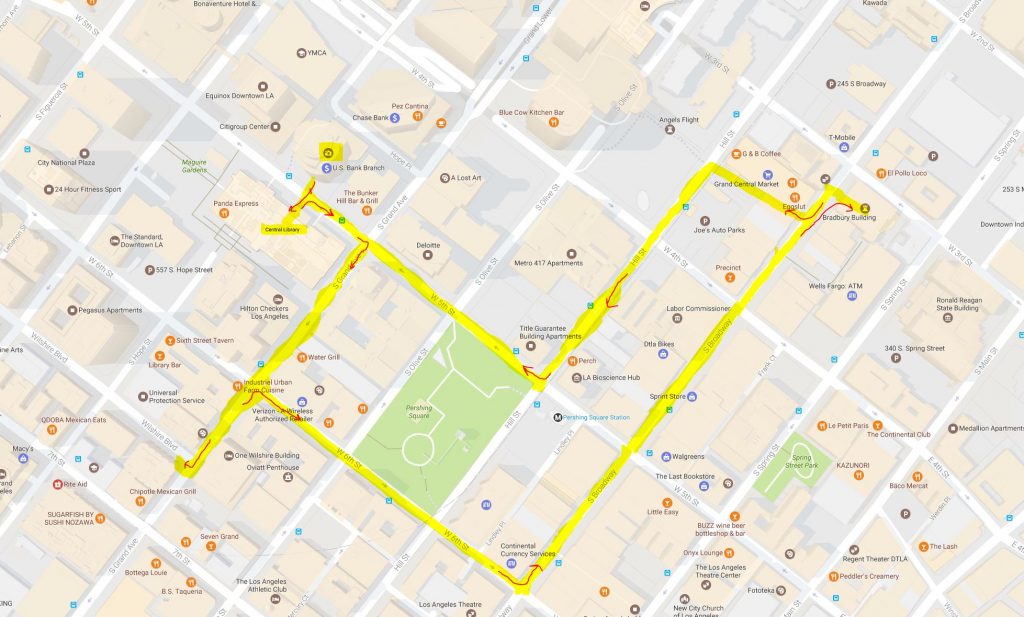 The OUE Skyspace LA attraction is basically the long-awaited Observation Deck that Downtown LA should have had since the U.S. Bank building was built in 1990.  But DTLA wasn’t really a tourist destination for the longest time, but now with the Staples Center, LA Live, and a whole host of people living down there now, DTLA is much different.  And I think finally it made sense to keep expanding what there was to do, so last year the top deck of the building was built to make this observation deck a reality.   Not content to be just a view, they also built a glass slide that drops you from the 69th floor to the 68th – outside of the building.  It’s a very short ride, but it is quite a thrill nonetheless.

Anyway, I get ahead of myself.  You first make your way into the lobby of the building, process through, and then go up to the 58th floor.  Up there are a few neat interactive exhibits like giant video screens showing various LA cityscapes at different times of day, a very cool peak down a very deep hole lit up like a disco, and some other random stuff.  I guess it’s to justify the cost of the ticket?

About to head up to the top

At the entry point

Inside there is a cool large video of LA scenery

Jump on the steps and interact with the wall

Fun random stuff to do on the 58th floor

As you can see, the magic chasm was pretty fun to play around with in pictures.  After you walk through all this excitement, you take another elevator up to the observation deck on 69 – and it’s pretty damn awesome.  A nice job has been done making a very clean, open space with quite clean windows to look out and take pictures through.  I do hate when observation platforms don’t bother to keep the windows clean as you’re kind of beholden to them for pictures.  Anyway, I digress – we did take a lap around the enclosed 69th floor to get a sense of what the views were, but held off on taking too many pictures as I wanted to be outside to get those.

Up on the 69th floor – the Skyslide awaits

Here’s a view of the slide from inside

Out that way is Glendale

Here you can see up Brand Blvd

There’s an open air terrace the next floor down

The entrance to the slide

I’m sure nothing will ever go wrong

But you don’t take the stairs to go down to the level below…you take the SKYSLIDE.

Yeah, it’s kind of awesome.  Brief, but awesome.  Some more from the Skyslide experience:

Larry caught me as I made it down the slide

Alright, the remaining pictures are a lot.   I couldn’t help myself though as there’s just so much to take in.

Looking up at the top of the US Bank building

And now down and east

The end point of the slide

It’s a comfy scene up top

Handsome Larry with a Pacific Ocean in the distance

View of the Oviatt Penthouse!

Our wedding place – the Oviatt Penthouse

It looks almost small – but man, what a great time it was

Alright, a whole lot of pictures of DTLA:

Panorama east and down

Looking into the City Center

The new Grand Wilshire – only the spire makes it taller than U.S. Bank

A long way down – but what a view

For quite a while, the Aon (formerly First Interstate) building was the tallest in LA

We almost moved into one of the penthouses here

In fact, it was the one on the far left corner here where those people are sitting

We think this is where Redbird restaurant is

Pershing Square in its basicness

Getting some selfies in

Wondering what’s in the fin of the new Grand Wilshire

These terraces are going to be lounges

Looking down into the Standard’s rooftop

Lots of great modern furniture arranged around the perimeter

Staples Center is visible in the distance

I’m sure a clearer day would have a nicer shot

Can see the side of the US Bank sign

With LA Metro and Union Station behind it

Still need to go into the Walt Disney Hall

It’s kind of hard to see the stadium as the parking conceals it, and apparently it’s also kinda sunken

The Bradbury Building from above – more on that later

Okay, I then tried to capture LAX in the distance…

Wanted to see if LAX was visible

LAX and the ocean

Effort to capture DTLA and LAX together

And some last pics before we went back to the ground:

Alright, so that was quite a cool experience.  I’d like the opportunity to go up closer to a sunset and get those kinds of colors too, but that can be for another time.

Once we got on the ground, we were right outside the Central Library of Los Angeles, which is itself quite a stunning building.  So we went in to take a look, and also we both got a library card.  It’s my first one in what feels like forever.

Central Library, Inside and Out

The Central Library is across the street

We went over and got library cards!

The hall inside the library

We didn’t check out any books today, but maybe one day soon?   I was getting hangry, so we then started walking towards Bottega Louie but a block before getting there, we ran across Karl Strauss Brewery.  Love the place from its Citywalk location, and that felt a little more relaxed than going to Bottega Louie.  So that’s what we did – perfect fit, getting beer and grub.   After that, we then walked our way over to the Bradbury Building.  Why?   Well, Larry had figured out where it was while we were up top and we figured if we’re down here, let’s go take a look.  It’s well known for having quite the dramatic and unique interior and also for having quite iconic films set within it – notably Blade Runner.  My pictures here didn’t come out quite as clear as I’d hoped, but you get the gist.

Food, Broadway, and the Bradbury Building

A late lunch at Karl Strauss Brewery in DTLA

Then we walked to the Bradbury Building

Looking back along Broadway – quite a lively street

Inside this striking and unique building

Inside has been used for many films, but Blade Runner is the most notable

Million Dollar Theater across the street

Then it was a walk back to where we parked, and along the way, caught one last glimpse of the US Bank building and the Skyslide:

We were up there

There’s the slide from way down below

And now we’re back home after a  fun afternoon.  Still figuring out where to eat having had a fairly late lunch.