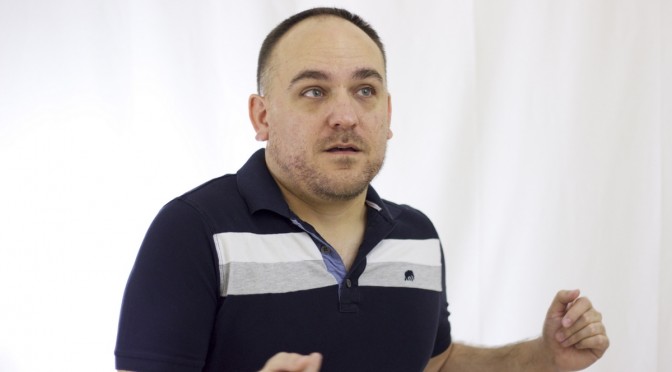 It’s frightening, I know.  Anyway, today in Los Angeles, the rain was the only story.  According to Al Roker, we’re set to get nearly a year’s worth of rain in about 2 days.  That’s a lot.  I took today off anyway but it happily coincided with the fact that I wasn’t having to drive on the 101 in this mess.  And boy howdy, it was coming down in buckets.  It’s so strange to have to deal with a real rainstorm as there has been shit for rain the past few years here.  I doubt this is enough to say the drought is done, but I imagine the rainfall will help restore some of the reservoir levels.  Here’s the view from our porch – it’s pretty hard to capture rain in a photo – but here’s the dreariness; imagine rain falling: 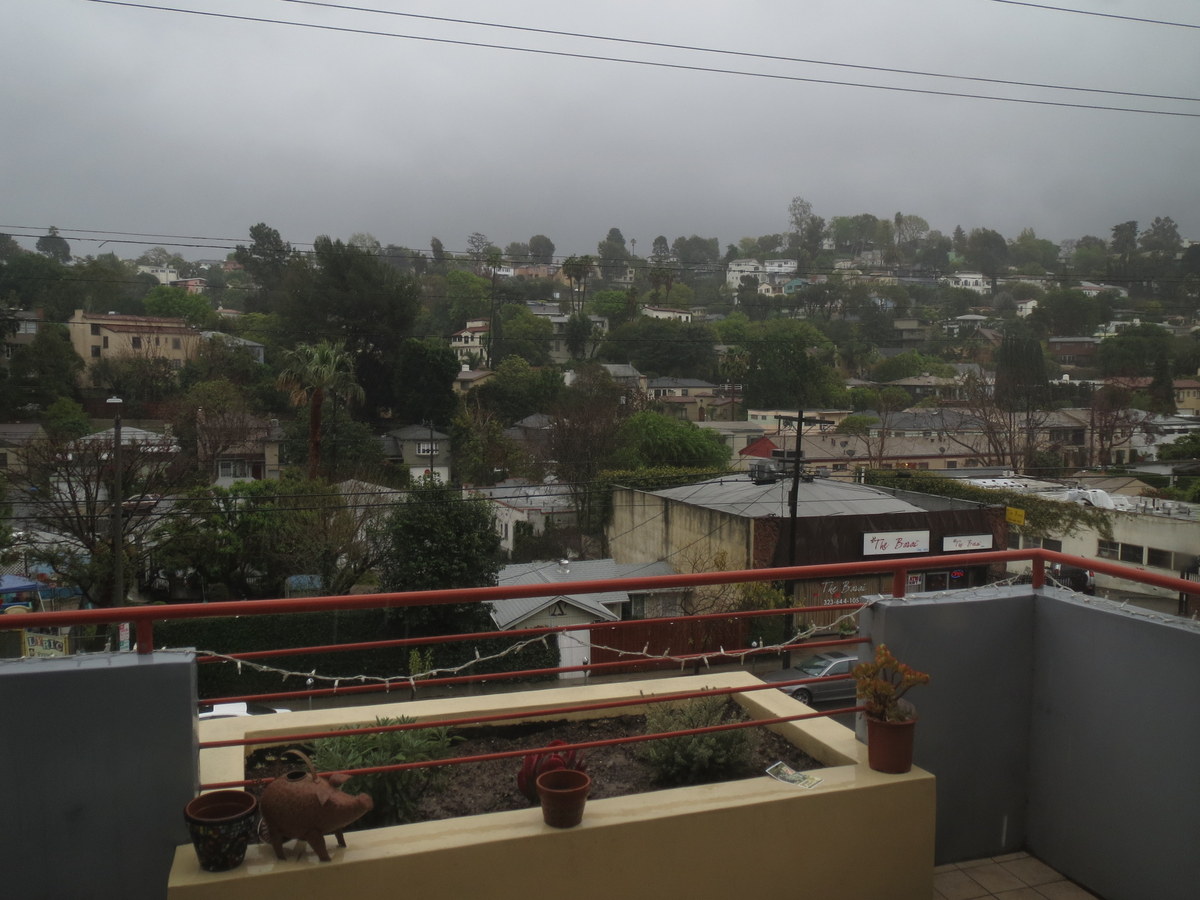 So there’s that.  Spent some of the day stocking up for our Academy Awards party on Sunday, as well as getting prepared for our own “red carpet” experience, complete with photo area.  Oh yes, it’ll be glorious.  To practice though, we took some shots of ourselves.  I’ve attached some of the good ones here of me; I took some of Larry that are pretty fantastic, and I think he needs to use them as social media profile pics.   Here’s where the action will happen: 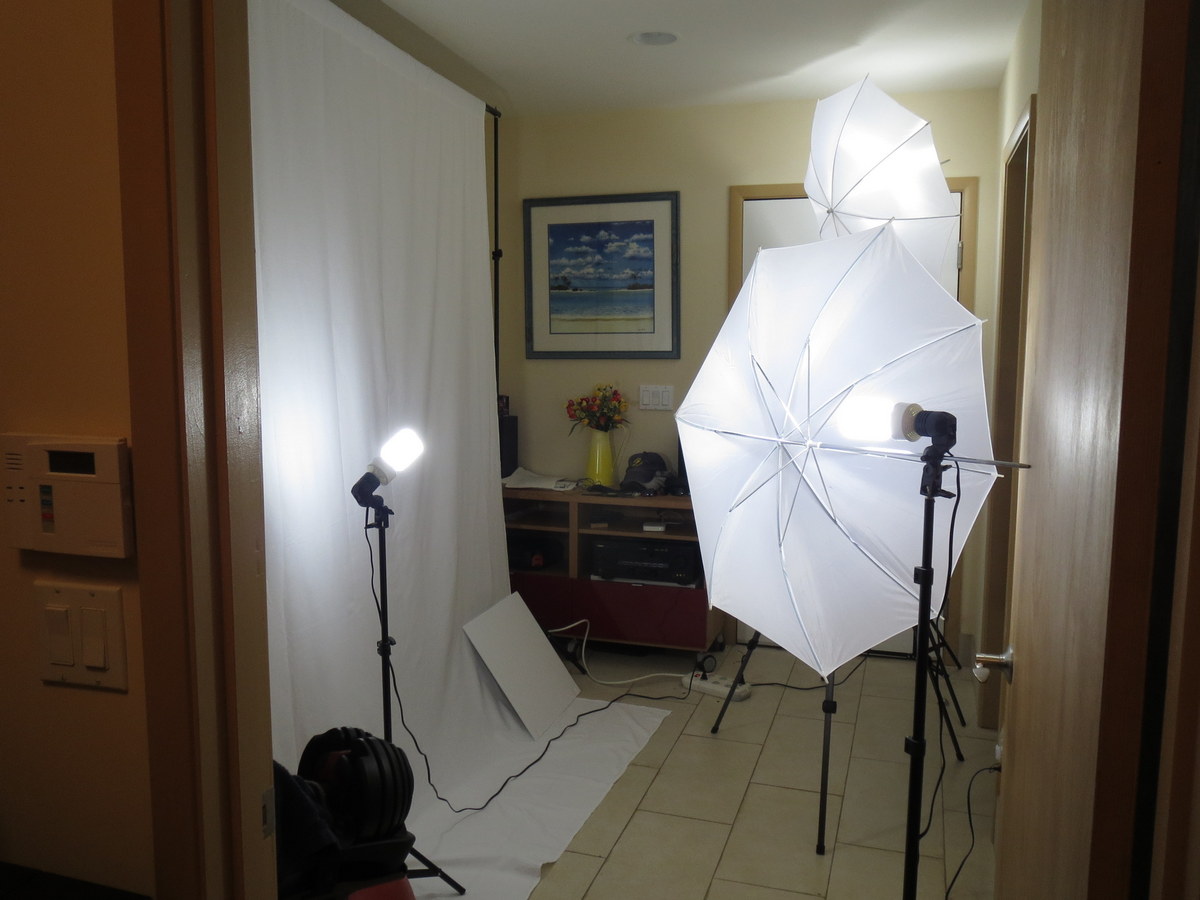 And here are the practice shots of me:

Alright, my webserver was being a total jerk last night when I was trying to connect to the ftp site in order to upload my pics… so stay tuned for those in a little while.

But I can certainly write about what’s been going on this week. I choose to go chronologically backwards this time, as frankly, it’s easier that way for me to probe my mind’s memories. I said probe.

Yesterday: I entered what is commonly referred to as a ‘Hobie Black Mood’. And as anyone who has known me for a while knows, I am a LOT of fun when those happen. Ugh. Typically this results when I become insane. I’m hoping Larry hasn’t dumped me from that. Luckily I don’t lash out, but I’m certainly not a happy person when I’m in Black Mood mode. On the way home from work on the ferry, I took some pics (which aren’t here, but they turned out decent!) and ended up talking to some random woman who offered to take my picture when she saw me practicing my self-pic skills. Then later on, when walking from Port Imperial to home, I was be-bopping along the sidewalk to my iPhone tunes when I hear this surprised scream and a THUNK on the ground. I look over and see this woman splayed out on the ground….no kidding. I immediately realize that this woman literally just fell the eff over. I then just walked on my merry way….NOT! I am a nice guy and immediately ran over to her to help her out. I asked if she was fine and I think she was more in shock, but I can see that I think she was trying to cross the road and tripped over her shoes and fell completely over. Yes, internally, I was kind of chuckling. I mean, we all trip, but most of the times we can catch ourselves. This woman didn’t. But I helped her up and made sure she was fine, and then we went our separate ways.

Today: (yes, I’m totally killing my chronology) The woman tripping yesterday reminded me of my bus ride from the ferry terminal to 30 Rock – the bus was starting to accelerate from a stop when a second later the driver slammed on the brakes..HARD. And this woman who had been standing got thrown right off her feet and flew forward….she managed to catch herself but it’s not surprising she got tossed as the bus stopped hard. Luckily she was okay.

Tuesday: Larry, Shelly and I met up after work to go to Lincoln Center for the NY Philharmonic Summertime Classic concert series, where they were playing Romancing the Riviera. It was a concert of Mediterranean-ish tunes and it was fantastic. They had this mindblowing violinist who did some solos and overall just some awesome tunes. We’re so cultured.

Saturday and Sunday: I spent the weekend with Larry and it was a lot of fun. It was also torrentially rainy. On Saturday we met up with Larry’s sister and brother-in-law for dinner – and it had been sunny and muggy most of the day, so neither of us brought umbrellas. Wrong move. No sooner had we gotten out of the cab that had taken us to SoHo did the heavens open up and a literal deluge of rain started coming down. First we took refuge in a Jeans store, then we decided to brave the walk as the rain lightened up….for about a second… because as soon as we had started walking again, the rain got ridiculous. This time we ran and ran to the Apple Store down there, but were totally soaked by this point. Literally…soaked. In the Apple Store it’s kept at a freezing temperature so you can’t really dry off there, and looking through the skylight, you could see the rain was NOT letting up. Finally it was just time to go so as we headed out the best sight imaginable was there: an umbrella vendor! And for $5 each, we now had some umbrellas! We then went to this French-Moroccan restaurant in SoHo that had great Sangria…and incidental drama. First, this guy literally passed the eff out right next to us and paramedics actually had to come get him, as the guy would regain consciousness only to pass right out again (I wonder if I’m having an effect on nearby people to make them fall?). Awesomely, the paramedics were there almost immediately after 911 was called. AFter that drama, it was then about the service, as this one guy who seemed to be part of the staff was high on something. I have no idea what….but he was having a great time talking to himself, loudly. It was great to meet some of Larry’s family though.

The next day was the NYC Gay Pride parade! Obviously this was my first one, and after getting a late start we ended up walking from Larry’s UES place as it was a beautiful day. Once again, no umbrellas taken (not even the newly acquired $5 ones). We got to the Midtown area around 30 Rock, after a brief detour to the Lever House and its art displays in its courtyard (think Hello Kitty fountains but they’re crying), and immediately you could tell the gays were in town, as you could hear the thumping of the dance music from blocks away. It was awesome. So Larry and I ended up watching the parade from right in the Midtown area, which is right where the parade started. It was quite a thing to behold – every shape and size and well, almost every cliche you could imagine were on display. Lots of ridiculously hot men, but plenty also of lots of lesbians, lots of drag queens, but most refreshingly, just lots of normal people who were marching just because. The weather while watching the parade got ridiculously muggy and of course, it started to POUR again, but that didn’t stop the parade, of course. Eventually the rain did stop and even though we all got soaked again (luckily Shelly had shown up with my umbrella by that point), the parade still went on (it was a LONG parade and a long parade route – about 60 blocks). It was a great time.

Afterwards, we all grabbed some dinner and then Larry and I went to see Wall-E (very entertaining Pixar movie, as expected).

Okay,….before this weekend? Can’t recall. but I’m sure it was good. Stay tuned for pics, hopefully later today.

And Jeff Crepeau is coming into town tomorrow! He’s now an East Coaster and lives/is stationed down in the DC area. Looks like there’s plenty of places to see the fireworks tomorrow so I’m excited about my first NYC fireworks display.