Rather than trying to fit these dissertations in another post, I’ll let them live on their own.  So….BIG BROTHER IS MUTHAFUCKIN’ BACK!!!  It’s the 14th season and while I typically always forget to watch the first episode, lo and behold, I remembered to record it from the beginning this time.  If you’ve never heard of Big Brother, here’s the low-down on how it works: 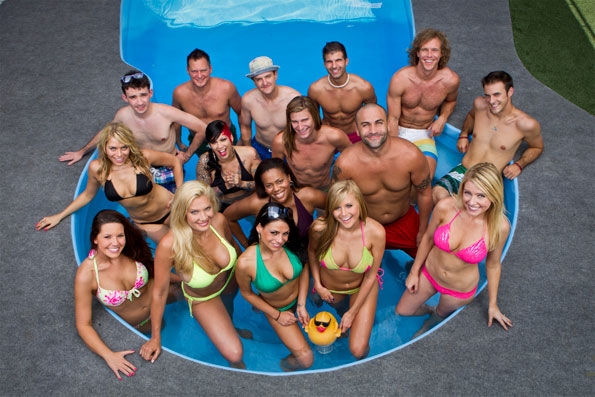 12 people enter the Big Brother “house”, which is a tightly controlled and completely isolated stage in Studio City that kinda looks like a house.  There is no TV, no books, no phone – no way to interact with the outside world.  Just 12 people left to deal with each other.  Of course, that would get boring after a while.  So what happens is that every week, a “Head of Household” is elected, usually by winning a competition.   That person gets their own bedroom and has immunity.  Immunity from what?  From being kicked out at the end of the week.  In fact, the HoH (Head of Household) has the primary duty of nominating two people for eviction.  Those two nominees then have to scramble and secure votes from the rest of the houseguests in order to stay in the game.  They have an opportunity mid-week to remove themselves from the nominations through the Power of Veto competition.  The nominees, the HoH, and three of the other houseguests (typically randomly chosen) then compete.  If you win the PoV (Power of Veto) competition, you can choose to use it and save one of the nominess (if you aren’t one yourself) or you can decide not to and let the nominations stand.  If you’re a nominee, you’ll obviously take yourself down.  There is a lot of strategy in play at this point as you can do the “backdoor” maneuver, meaning you take one of the nominees down and put up for nomination who you really wanted gone the entire time.  At this point, you’re backdoor’d because there are no more opportunities to save yourself.  At the end of the week (typically Thursday), the live episode airs and Julie Chen guides the live vote, when we watch the houseguest finally vote to evict someone.  If there’s a tie in the voting, the HoH breaks the tie as they don’t get to vote. The evicted houseguest has a minute to leave, and then they talk to Julie out in the studio where the live audience is and there’s typically bitchy messages from the remaining houseguests for the evictee.  Rinse and repeat. 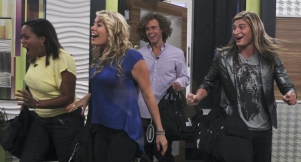 Yet, as we found out at the beginning of this season, and as is typical for all seasons, “expect the unexpected.”  This season, the first twist was that four previous contestants came back as well, this time not competing for the grand prize of $500K, but as coaches to the houseguests.  As additional motivation, $100K is awarded to the coach whose player is the winner.  Which four previous guests came back????  Dan (winner from BB10), Mike Boogie (winner from All Stars/BB7), Janelle (goddess from BB6, All Stars/BB7) and the best news ever, Britney (4th place from BB12)!!!!!  I love Britney, and to have her back and she seems to be basically the same sarcastic, bitchy self she was in her earlier season.  Yay!

The new houseguests all got their intros and blah blah blah, there are gay ones, hot ones, dumb ones, unlikely ones, etc.  They’ll be given names when they actually have personalities to talk about.  The first major thing that happened in Episode 1 was that the coaches did a schoolyard-pick for houseguest that they’d coach.  Here is how it all brokedown:

Now that you’ve got your gameboard in front of you, here’s basically what ended up happening that first episode – the four groups raced against each other as teams on a bouncy bed obstacle course, with each team member having to traverse the course without falling off on the way. Whichever team finished first was good as the coach of that team got to select the first HoH from his or her team. The team that came in last on this challenge was in a bad spot, as the coach would have to select someone to immediately send out of the game. 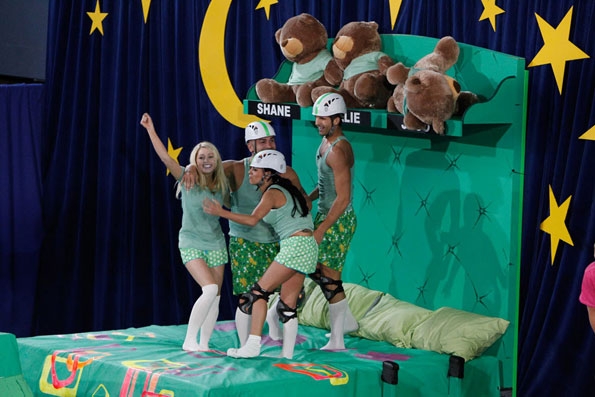 We barely knew ya, Jodi!  I don’t think you’ll miss it in the house.  I know that this is one show I’d never be able to handle.   I think Dan chose poorly when he went for females first (no offense, ladies).  But he didn’t have any guys to help him be competitive in the challenge, and now he’s down to two female members while everyone else has three members.  It will be interesting.

In the second episode, things started getting a little bit more scheme-y.  Janelle and Britney bonded immediately (Britney noted that Janelle had been her hero) as they knew that Dan and Mike Boogie had already allied too.  I must admit that Britney made an interesting move naming Willie as HoH.  Everyone would have been gunning for him as they immediately figured out he is Russell Hantz’s brother.  So with him in the power seat, he got the chance to make some loose alliances.   He promised Frank that they’d go far together, but upon further strategizing with both Janelle and Britney, it was clear that Frank was Mike Boogie’s strongest player, due to Frank’s easy personality.   Of Dan’s remaining players, Britney & Janelle reasoned that Kara was his strongest as she was the only one to successfully complete the challenge.  Obviously Willie looked to be in a bind, but he ended up following his coaches’ advice and nominated them both. 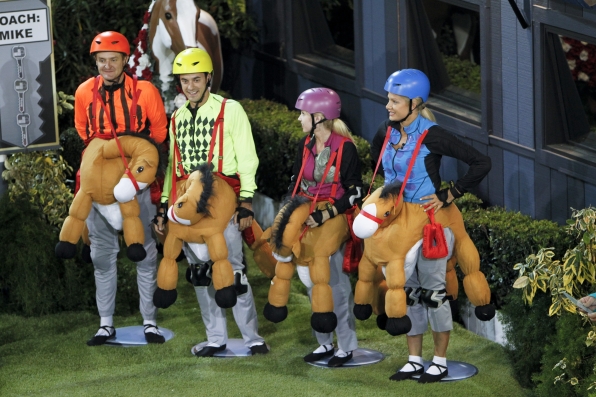 There was also a new challenge added to the mix since there are now coaches involved.  In the challenge, the coaches competed against each other in a Coaches Challenge Derby, dressed as horses and having to catch the other racer on the course.  Mike Boogie ended up winning handily, and as his prize, he got to bestow immunity to one of his players.  He gave it to Ian, who definitely could use the help, as Ian’s insane side came out in a big way, with him strangely wandering around the house at night, streaking, and overall just being a tad off.  The coaches also had to establish who were the Have-Nots of the week, and this week each coach had to select one of their team members to be a Have-Not.  Ian also got tagged with this (not a bad trade-off) while hotness Shane, Danielle and Ashley also got selected.  Not only do they eat slop (Big Brother’s version of tasteless oatmeal), they also have to sleep in some crazy-ass eyestrain of a room.  Also, cold showers.  ugh.

Big Brother really has come back with a bang and I can’t wait to see what happens tonight with the Power of Veto competition!!!!!