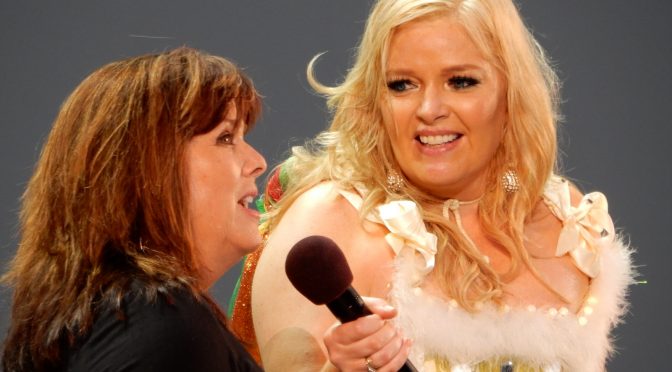 People, I was BACK for this year’s Sound of Music Sing-A-Long at the Hollywood Bowl, unlike last year when I got scheduled for training in Dallas.  Let it be said that was all actually for the best, as I got to see my Dad and explore a little bit of Dallas.  I was totally ready for seeing 11/22/63 and finally understood the geography of that crazy area.  But I digress, as this is all about starting off our Hollywood Bowl season!

It’s weird that the SOM Sing-a-Long is on a Friday in June, when for so long it was a Saturday night in September, which made it much easier to get to.  It’s kind of a bitch to get to the Hollywood Bowl on a Friday night, justsayin.  Happily, we still just take the shuttle from the LA Zoo parking lot and it makes things much simpler.

Mila and Sveta were there this year, as were some of Mila’s friends and coworkers, Sonny, Ellen and Robin.  It was kind of jaw-dropping to see that we were headed right to the very front of the auditorium – like literally the front of the crowd.  It was awesome.  We got to see the costume contest in all its glory, and being that close felt like watching The Sound of Music in IMAX.  Loved it.

The costume contest winner ended up being this ridiculously adorable little girl dressed up as the Baroness – I think the cuteness was a good start, but the girl hit us all with a one-two punch with the “two” being when she dropped the line, “Haven’t you ever heard of this wonderful thing called boarding school?”  The Baroness’ most villainous line coming from this super cute little moppet won over not only those seek cuteness but also icy gays like myself who worship at the Baroness’ feet.

As for the movie, it was of course wonderful.  I had had a pretty stressful week and was in desperate need of something like this, which meant my weekend was not bad.  And I even avoided getting completely plastered like I did two years ago.  OOF.  I can still remember that.  Or I can still kinda remember that.

All the peons behind us

She brought up a Broadway friend

This hot guy starred in the Broadway version of Once

Loved these guys, although the upcoming Baroness just rocked it

There she is – the eventual winner

She was fantastic – but stole the show

when she uttered, “Haven’t you heard of this wonderful thing called boarding school?”

Some of the honorable mentions

I think we know how this one was gonna go

Melissa and the Baroness

Tried to do selfie

Edelweiss is always a stunner