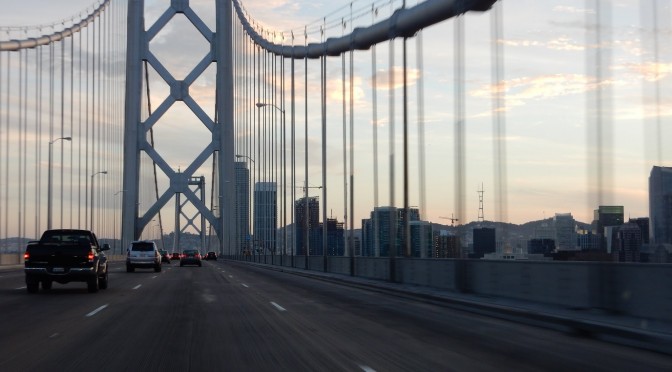 Happily, no throwing out of the back occurred, but that possibility definitely loomed in my mind during the 4 days we were up there.  Who needs to have a repeat of that nonsense?

Why’d we head to San Francisco in such a spur of the moment way?  Well, at work, things slowed down for me and I figured I want to take some vacation as I hadn’t in a good while.  Second, and most importantly, Larry had been in the process of interviewing for a new job and whether he got it or not, I wanted us to get the heck out of dodge.  Super happily, Larry GOT the job, so this was a celebratory trip, and thankfully, they wanted him to start on Monday.  So Thursday and Friday were free!  In fact, we didn’t book the hotel until Thursday around noon once Larry got the good news.  We had decided to pack the night before just in case we decided to go so that did save some time, but we still didn’t get out of the house until about 1:15 on Thursday afternoon.

It’s a pretty long schlep to San Francisco from Los Angeles, even taking the 5.  No idyllic Highway 1 this time – but even with that direct route, it’s 375 miles and on a weekday, takes about 6-7 hours.  Totally worth it though!

Day 1 – Driving Up to San Fran 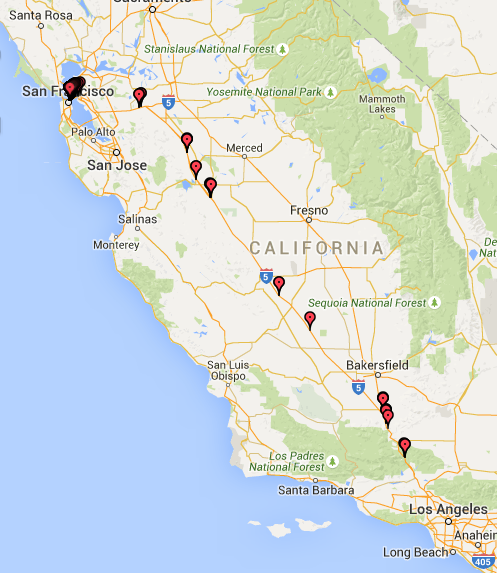 My snazzy new camera has GPS built into it – so if there’s a GPS signal available and there’s time for it to pick it up, I can now geo-tag!  So here’s the various locations we were at when pictures were taken on that way up!

The Scenery Along the I-5

Driving through the Grapevine

Looking out towards the vast middle of California

What a relief it was to finally see civilization again!  The temperature also became kind of reasonable when we got closer to the water – it had been pretty consistently 105-108 degrees the entire drive up Central California.  Once we saw the new Bay Bridge, I got stoked.  Then of course once we were in the city proper, the frustrations of driving in a big city’s downtown started up, as of course Google Maps thinks it’s doing its job just getting you there.  Alas, we needed to be on the other side of the road to be able to drop the car off at the valet at our hotel (the Sir Francis Drake, a Kimpton Hotel – very nice, btw) and SF has tons of one-way streets and lots of no-left turns. Many right turns later, we found our way back to the right side of Powell St and dropped the car off.  We had arrived!

Finally in the Bay Area

Sunset over the bay

On the new Bay Bridge

And there’s a dramatic sight waiting for you

Golden Gate in the distance

Take Me to Fremont Street

Settling In, Getting Food, and Some Night Shots

After that long of a drive, it was a welcome relief to be at the hotel – but importantly, we needed to eat.  Larry did a quick Yelp search and found what ended up being a wonderful respite and quite full of young and attractive hipsters.   Perfect!  It was also just a great restaurant – Hops & Hominy.  Very cool place.  Tell ’em Hobie sent ya.

After dinner, we then walked around a little bit near the hotel – we were a block over from Union Square so we wandered that a little bit at night.  It was nice to get a new perspective of San Francisco as last time, we stayed down by Fisherman’s Wharf.  That’s a whole different ecosystem than being right in the middle of the skyscraper part of the city, and quite a different experience.  I’m really glad we got that different feel.

View from our 19th floor room

The lobby of the Sir Francis Drake Hotel

Larry at Hops & Hominy, our dinner location that first night

This Macy’s is pretty impressive to look at

Looking back to our hotel

Back at our hotel

I’m not up for posting all the ridiculous amounts of pictures tonight – so day by day it will be!