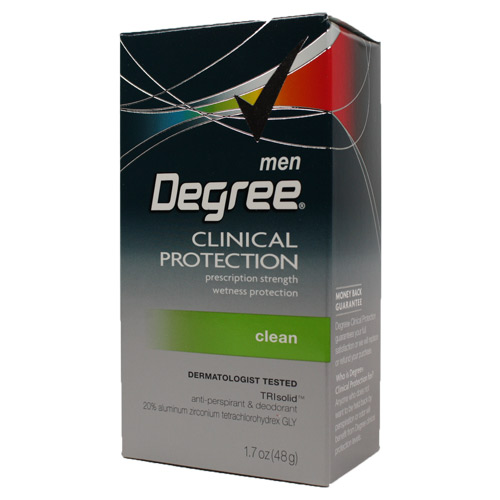 For years, I’ve had what you would call a problem with sweat. Â As in, I can be quite the sweaty beast. Â I’ve got the greasy face for all to see and when I exercise, I’m the guy whose shirt gets pretty damn wet. Â (That could be hot if I had a ridiculously built body….I’m working to that point). Â  I unfortunately also am one of those who can get armpit sweaty in minutes after putting on a shirt. Â I know that stress is a definite factor in my struggles, but even when I wasn’t stressed, there I was, Soaky McGee and the Totally Bummer Summer.

I think it was in college when I found my original savior, the deodorant called Degree. Â I tend to favor the soft solid deodorants over aerosols or the roll-ons or the nasty hard sticks, and Degree’s soft solid WORKED. Â Then one day I’m at the store and I can’t find the damn Degree. Â I see women’s Degree and I see some of the hard stick Degree, but not my precious pressshhhhuussssss soft solid. Â Went to Target, the pharmacies, everywhere….that Degree ship had sailed. Â I was devastated. Â And so began the next decade (give or take a year or so) of me making do. Â Luckily with the BDU uniform, I could count on the black undershirt to take on my aggressive armpits and the weird patterns of the BDU overshirt to camouflage (it DID have a purpose!) my sweat. Â Blues were a different story, and I think I just managed to ignore it for the most part. Â But once I joined the civilian world, or should I say the stressfulÂ civilian world, Armpit Jones and the Temple of Skanky Sweat returned. Â It was awful. Â I tried every clinical strength out there, and sometimes it seemed to work only to not work just a few days later. Â Alas, I persevered – at least I didn’t stink up the joint. Â One somber 2011 day I was in the CVS and my eye happened upon the magical logo you see above…a clinical strength soft solid Degree!!!???? Â I eagerly added it to my basket and put my hopes on the next day being a dry one. Â Well, the next day was dryer than the one before but it wasn’t a miracle salve. Â The following day though? Â That was the money. Â I was dry!

All the agony and the self-fulfilling stresses were cast aside! Â I even felt my bald spot getting less bald with all the stress I took out of my life just by not feeling self-conscious. Â So flash forward to last month at CVS – I can’t find the fucking deodorant anymore. Â There’s an empty slot where my Degree would normally be. Â Fortunately I had seen some at Albertson’s before and bought it there. Â Yet my doubts had been awoken. Â Tonight I went grocery shopping and thought, “hey, I should pick up some in case CVS is out again.” Â I’ve told Larry that I will stock up on the stuff if I ever think it’s going to stop being made. Â  When I saw that it was only $4 at Albertson’s, I immediately rejoiced. Â Then I read the label – CLEARANCE. Â Oh dear. Â I swept in 6 boxes of the deodorant and tried to keep cool (LOL). Â I still don’t know if P&G or Unilever is going to stop making this, and I kind of don’t want to know. Â I see on Amazon that you can put in a subscription to have it delivered on a regular basis which I think I may do….so I’m hopeful it’s just these local retailers and not a sign of things to come. Â People, I don’t know what I’ll do if I have to suffer again without Degree. Â Nothing else works for me!!!!! Â NOOOOOOOOOO!!!!!