Sounds like a skin disease, doesn’t it? Fortunately for you (and most definitely for me) that’s not the case.

Last night I went out with Shelly, Ray and one of Shelly’s friends from Boston. I had felt all mopey on Friday and kicked my own ass into gear so that on Saturday, whatever I was doing and/or whoever I was with, I was getting out of the apartment. Shelly and her friend, Stefan, had set up an evening of dancing at this club called Pacha – and from what my iPhone had told me (yes, it talks to me – should I worry?) it was a…. psst, it listed it as a gay dance club. So I was totally down for it because as anyone worth their dance salts knows, the gays know their dance music. And I wanted to shake it. Bwahahaha. I crack myself up. I found out in Shelly’s car though, as we were driving through the Lincoln Tunnel to Manhattan, that it wasn’t. Dammit! Foiled again. Guess I’ll just have to dance with the straightys. And I am so glad I did. WHAT AN EXPERIENCE. It really was a lot of fun. I guess Pacha could be grouped into a ‘megaclub’ category as it has multiple floors (I think there’s alleged to be 6 floors although not everyone can go to all the floors – some floors are ek-SKLOO-sive) but we could get to 4 of them…or was it 3? I don’t know. After you get through the entrance here, you first walk through a very ‘intimate’ (meaning small) dance floor that was focused on hiphop that night in order to get to up your first set of stairs to the Main Floor. It’s a huge floor. And we got there early (around 10:30 or so – positively unheard of in the cool Manhattan circles – luckily for me I’m not part of those circles!). So at first this place seemed like it may be a bust. But we went to the bar and got some drinks and started feeling the house groove that was being played from the DJ. It was a really good house rhythm – and while there weren’t many people out on the floor (the vibe was distinctly junior-high-dance, with guys all grouped around looking slyly at the girls, etc…), that didn’t stop me and Shelly from starting to groove out there. Susan can relate to that with starting up dance floors! And sure enough, other people started dancing, and guess what, Shelly and I started up the floor. Of course we were just a spark because once that floor started, good God it blazed. The house beats never segued into pop song/remixes or any vocals at all. I think I could pick out beats and rhythms from famous songs but it was always just the music and the beats – and wow, it was incredible. We went upstairs for a bit – to take a break every now and then as it got HOT down there – and on that next level (past another ek-skloo-sive floor) you can look down on the action on the Main Level through glass but it’s a whole ‘nother dance floor up there with a totally different DJ playing just-as-addictive beats. This place was ridiculous. We stayed mainly on the Main Floor though – and by about 2am the floor was jammed with people all caught up in the rhythm. Seriously – if you were out there, you were dancing with like everyone. I don’t think I was incorrect in my initial thought of Pacha – this was definitely a mixed club in terms of it being more than just a straight or gay club. I think it’s more of an equal-opportunity come-to-dance place, which made the vibe even better. You were there to dance, not to worry about being ‘seen’ or something pretentious like that. It was awesome. At one point in the night though, they blacked out the lights, pumped the room full of fog, and then turned on their brightest strobe light and pulsed it. You literally COULD NOT SEE anything but white. You could hold your hand up to your face and not see it. It was like anti-reverse-opposite-blindness in which it wasn’t pitch black, but it was pitch white. It was actually surreal, and a little bit frightening, as you really couldnt’ tell what the fuck was going on with your eyes. I’d never experienced anything like that before. And I swear I have not started doing drugs, so no smart-ass comments. By around 3:30, we decided to call it a night, although we were told the club stays open till 8 or 9 in the mornign. Who the fuck is still dancing and has the energy to dance at that time????? Certainly not me!

My ears have finally stopped ringing although it’s about 8pm on Sunday now and they’re finally about normal. I didn’t mix alcohols this time and I really don’t think I was hungover today – just tired. And ringy-ears-y. But it was a fantastic club and any of you that come to visit me and wanna dance – rest assured we’ll be going there one night. A must see. Susan, Melissa…I’m talking to you! 😉

As for the rest of the week? Dad fucked around with me via email and I gotta admit at first it was mildly offputting but then I remembered my dad is absolutely nuts. No medication is going to help you, old man!!!!! 😉 I love you, Dad. I worked a lot, got somewhat sick midway through the week and came home and crashed and got about 12 hours of much-needed sleep. Felt better after that!

Now it’s time to restart the week. Joe from work has left for his LA rotation and our little ‘hood in the office definitely won’t be the same without him around. The four of us (Arielle, Dan, Joe and I) went to the Channel 4 Bar on Friday for a last lunch with Joe – there’s a few pics from it. I must say I will NEVER wear that beige shirt again. It’s a fucking circus tent on me. You see how I’m blaming the shirt for my bad pic? It’s a technique you all can try if you find yourself in this situation. 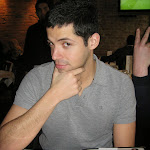 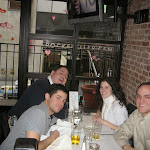 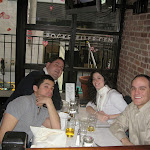 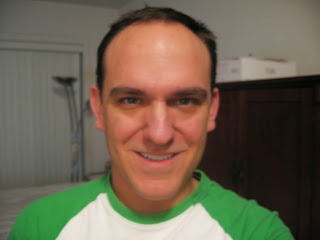