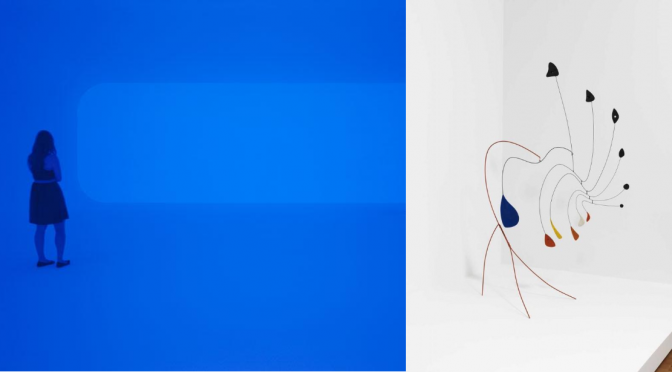 I took today off.  It was nice to have a 3-day weekend, plus we used this day for tourism, and not just general laziness. Not that I look down at such things.  At the LACMA, there is currently an exhibition going on for James Turrell and it’s one that requires you to get tickets ahead of time to even get in to see it.  Why do you need reservations?  I’ll get to that.   I ended up not being able to get tickets for a weekend (of course) but for today, I was able to get them 2 weeks ago.  So, 3-day weekend it was, and today it was off to see more art! 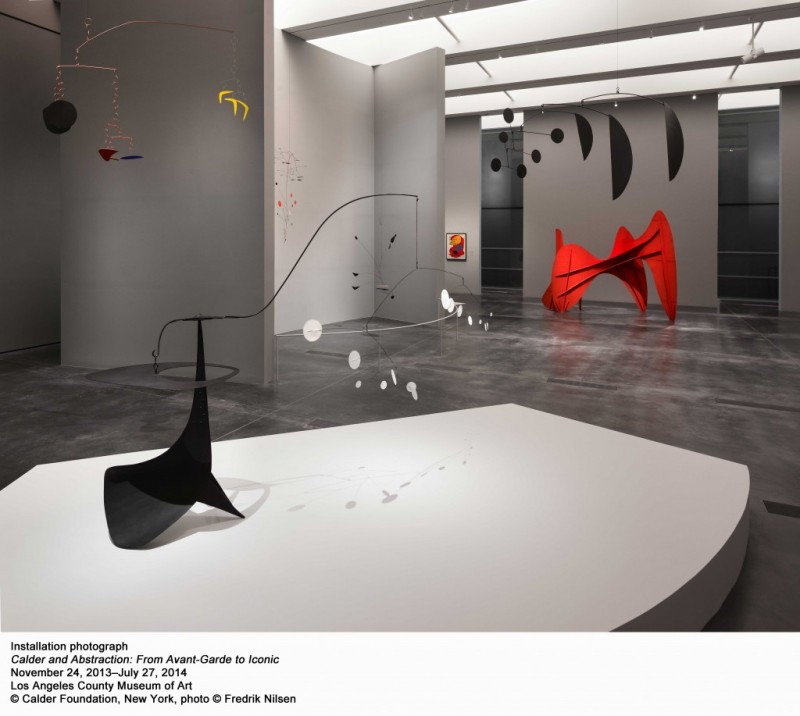 In addition to the James Turrell exhibition, there’s also one about Calder and Abstraction.  That one doesn’t require a reservation time, so we went to that first as we got to LACMA a little early.  As you can see in the picture above, Calder’s main thing was to create “mobiles” and “stabiles” – but these are no mere baby cradle decoration.  The picture above gives you a sense of the size, scope, detail and attention to physics and construction Calder put into them.  The pieces are mesmerizing to look at and I am in love with the colors he frequently used in them.  He also must have been extremely patient as so many of these pieces require extreme and measured balancing of the pieces – the piece in the foreground above is an example:  that entire thing is balanced on that main stand with the main ballast on the left while the right is a tree of linked, hanging objects.  It’s beautiful and fascinating.  Larry & I kept wondering how the heck these pieces are transported and reassembled – suddenly gaining a lot of respect for museum curators!

We had some time left before going to the Turrell exhibit, so we sat through a full cycle of David Hockney’s “The Jugglers” multimedia installation.  It’s a 3×6 grid of giant monitors displaying one scene, but each monitor was its own camera so it’s not a single viewpoint of the happenings; in fact, there are 18 viewpoints but stitched together.  It is hypnotic though as your eye isn’t able to take it all in and Hockney made sure to put something interesting in every panel to watch.   When the jugglers first enter the scene, there’s a very nice accordion version of Sousa’s “Stars and Stripes Forever” march playing over the action. 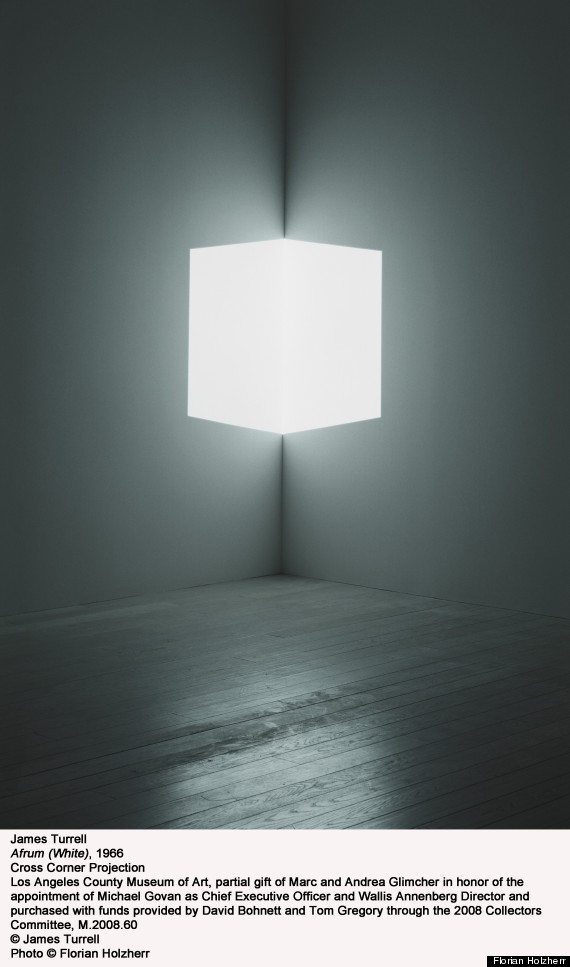 Finally though, the big ticket item was going to see the James Turrell exhibit.  It’s split up into 2 sections, with Part I at the Broad Contemporary and Part II at the Resnick building.  The image above is called “Afrum” and is the first thing seen as you enter Part I.  I’d never really heard of James Turrell, to be honest, so I knew very little about what to expect going into this. Larry had told me it’s mostly about playing with light and space and that is basically exactly it.  That description of course trivializes the whole thing as it really is something you have to see for yourself.  “Afrum” is really cool to walk around and watch how it changes, with almost a hologram’s presence.  There are other similar installations in Part I, all of which play with the color of light, the darkness, shapes of colors….it’s beautiful.  One of the off-putting sections has you walk down pitch-black corridors before entering the pitch-black room – I felt scared at first as it almost seemed like a haunted house as you can’t see a thing and you’re afraid of bumping into someone.  Going on a Monday probably reduces that chance, but I imagine during the weekends, it’s a likely occurrence.  Of course, it’s not a pitch-black room when you get into the chamber, and instead there’s a highly focused shape  or shapes of color and you can really really zen out.  It’s a great exhibit.  Part I also had a slideshow of Turrell’s other permanent constructions throughout the world….and let me just say, I totally want to Turrell one of my rooms up as that would just be the best place to go after a long day.

The picture above is not from a science fiction movie.  It’s in fact what Part II of the Turrell exhibit is all about, and why there’s a need for a reservation and time.  This is the installation called “Breathing Light” – and it’s one helluva thing.  You first have to remove your shoes and put on disposable white booties and then wait for the rotation before you to end.  When it’s your turn, you take the steps up and enter this giant chamber.

The light in the room proceeds to slowly and subtly change.  There are no visible lightbulbs to be seen with the exception of a psychedelic rectangular outline of the entry portal, so it’s very exciting to just have a sense of feeling and experiencing the color.  I swear I’m not high.  But can you imagine if you WERE high?  This place would make you wet your pants.  I think the technical prowess in building such a chamber along with the technological feat of having it lit by unseeable lights is just as exciting to behold as is the “magic” of being utterly absorbed by this room.  The colors change from blues and greens to reds and pinks….when it changed to red I immediately looked to Larry and was like, “SUPERMAN II!!!!!” as it could have been a molecule chamber taking away our superpowers!!!!  You get about 5-10 minutes to stand in the chamber with about 7 other people, wandering as you want around the large room. It’s also an experience to look back out the entry way as the colors in the ante-room also change, frequently to evoke a contrast to the dominant color in the chamber.  It’s such an amazing thing to experience and I’m soooo glad to have taken the day off to do this with Larry. 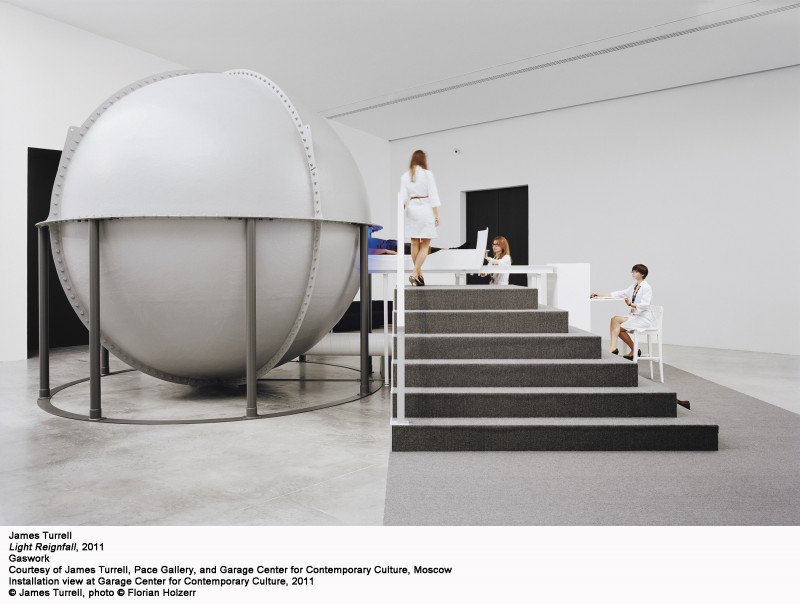 I’m also appreciative of learning about James Turrell, as now I’d love to see other exhibits of his.  There was a room all about his Roden Crater facility in Arizona which must be an absolute trip to experience.  There was also a sensory-overload chamber (as seen above) that looked like an MRI combined with a Death Star which was booked solid by last year, so without reservations you can just see the outside of it as it’s manned by pretty female “technicians” who process each visitor.  There’s warnings about doing this if you’re claustrophobic.  Guess I’m okay with missing that.

If you’re in LA, I highly highly recommend going to see it, although time is seriously running out as the exhibit ends April 6, and no more reservations can be made.  So maybe you’re screwed if you haven’t seen it yet.  ANYWAY, here are the pictures I was able to take at LACMA which didn’t include any of the above as you’re not allowed to take pictures of your own.  Feh!