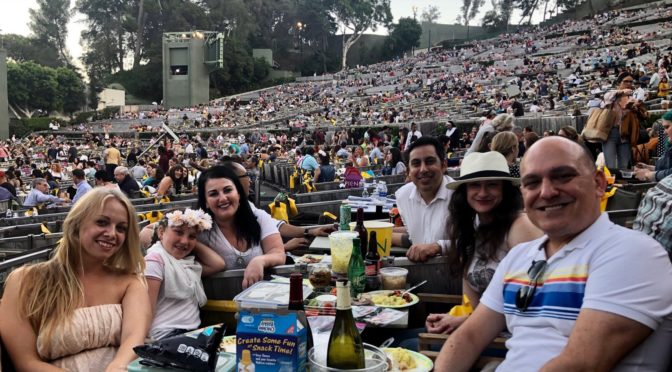 The Sound of Music Singalong has been a California tradition for Larry and me since moving here in 2011.   Some years the attendees aren’t all the same, as one year I was in Dallas so I didn’t make it – this year, Larry was still in Fort Lee recovering from his hepatic pump surgery, so I was allowed to let Nicki take Larry’s place.   The horrors:  Nicki had NEVER seen The Sound of Music before.  Like, what?   I don’t even understand that.    The regular crew was there of course, with Sveta, Nicki and I being the first to arrive.   It was weird – it was my first time going by myself to the Bowl.   Remembering now, Larry and I did make it to a few Bowl shows this year, but not as many as hoped as he just didn’t feel well for a lot of them and we’d not go.  I wasn’t sure if he had gone at all since having moved to the GlenLA, but yeah, we did.  I’ll get to those I guess, soon enough, as I work my way backwards in time doing these posts.  It’s nice to park at the Cahuenga or Annex parking right there, as the ride is much quicker than the one from the LA Zoo.

ANYWAY, Mila, Ilona, and Sonny were also there and we of course enjoyed the pre-show fun with Melissa Pederman as host.   I don’t know if I paid as much attention to the costume contest this year as I think we were yenta-ing it up with our food and drinks, but still, it’s just such a fun atmosphere.  Nicki enjoyed the movie and the experience, and I know we’ve bought tickets for this year’s sing-a-long, including Nicki, but a lot will come down to if this pandemic gets under control.   Ugh, this is just too much.

Nicki joined us this year as Larry was back east

Always a good spread brought by others

Melissa Pederman, our host with the most