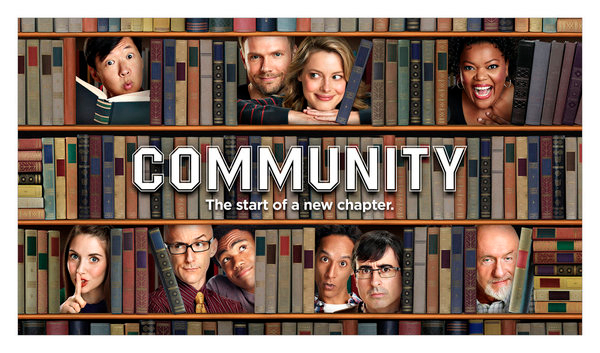 Last night, the super wonderful folks of NBC (blatant sucking up, yes) started airing the beginning of the fifth season of Community!   It’s a crazy miracle we are even having a fifth season, to be honest, as it has a very tortured behind-the-scenes story that would probably make a good True Hollywood Story one day.   But to make it brief, after the third season, Sony Studios and NBC ended up firing the creator, Dan Harmon, from the show.  So the fourth season was run by people who had been working on the show before, but unfortunately for them, Community really is a show that reflects what Dan Harmon wants it to.  Much of Season 4 was missing something, even though it was still fairly enjoyable.  But somehow after Season 4 was finished, money was exchanged, favors were promised, or calves were sacrificed, and Dan Harmon was un-fired and reinstated as the showrunner of Community for Season 5.  Also, Chevy Chase was asked not to come back.  So despite all this drama and fairly poor ratings, relative to CBS shows at the same time, Community came back.  It helps Community that NBC’s other shows on Thursday can’t find an audience and Community outranks those.  So yay!

Anyway, last night there were 2 episodes aired, and it did feel like things were “back.”  The first episode, “RePilot,” figured out a way to bring the cast (sans Chevy Chase, kinda) back to Greendale Community College, while the second episode, “Introduction to Teaching,” expands on one of those reasons, namely that Jeff Winger (Joel McHale) is now a teacher there.  I don’t think I’m cut out to do TV reviews, so I’ll drop a link here for the A.V. Club’s amazing review and comments section, which is where you’ll find the most insightful yet obsessive comments and discussions around for this show, as well as many others.

The A.V. Club / TV Club review of “RePilot” and “Introduction to Teaching”:

I’m just glad the show is back, and dammit, I really want it to make it to #sixseasonsandamovie!