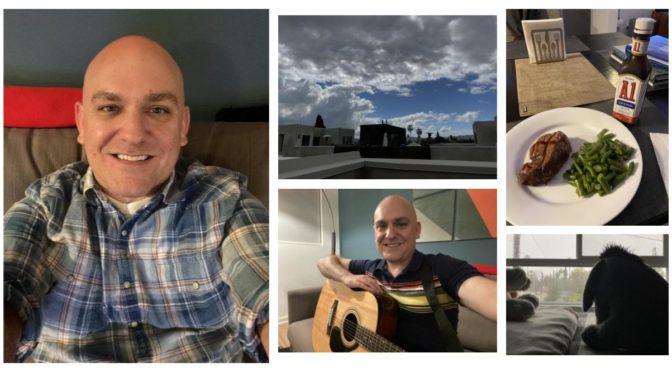 All things considered, I decided to title this post ‘the beginning’ as I know that from all indicators out there, this social isolation we’re doing is likely not going to be short term.   That frightens me quite a bit.   I have the resources to get through this, but so many don’t.  I am lucky to be able to work from home, but I recognize that there’s so much uncertainty out there, who knows how long things can maintain?  We’re in unprecedented territory – the entire world is basically shutting down, for an unknown period of time.  Our government leadership is a fucking mess and are far too late and far too incompetent (accidentally, willfully, and/or arrogantly) to be trusted to manage the situation, with headlines bearing that out every moment.   A day feels like a week.  It’s just….unbelievable this is happening.

I’m relieved Larry isn’t here.   I think I mentioned that elsewhere in a post?  Maybe it’s just in conversations with others – the idea that if Larry were undergoing treatment now, and him having a weakened immune system because of it, and that if somehow he caught coronavirus from me or someone and that was what caused his death?   It’s utterly inconceivable –  my mind literally can’t deal with that.   I miss Larry so much, and I do wish I had healthy no-cancer Larry here as I am definitely feeling quite lonely and isolated.   I’m obviously not alone in that regard as everyone is feeling that, but a lot of people still have some kind of roommate or family to comfort or be comforted by.  I don’t.  I have my friends via text messages, phone calls, and that helps quite a bit.  But god I miss having my husband here.   Of course my first caveat stands – cancer Larry is not someone I could deal with having here at this moment.

Last week, Stacie and I moved mom into an assisted living facility.   Not much has gone right in my life this past year and a half, but in this case, we got that process started at the exact right (and as it likely turned out, last possible) moment.  She has her own room, all the cable she needs, her own bathroom and shower, and a big closet.   It’s a very nice set up, and there’s someone available 24/7.  She had a few nights where she was able to partake in going to the dining room and meet people, but obviously the older population (especially over 70) is at risk, so they’ve quarantined everyone into their room for safety and they get meals in their room now.   I know it’s not ideal but knowing she’s there versus being by herself at her house when the caregiver isn’t there would have also been a giant amount of stress for me.   Our timing couldn’t have been more critical in getting her there before this all started.   Mind you, the last week was very hard and there were some seriously annoying bumps doing it, but in the course of a week, I can barely even remember something that before might have driven me to still be angry about.  She’s there, she’s safe, and I was able to see her Saturday as I brought some additional things she needed, but now I know I won’t be able to see her again for a little while.

It’s crazy.  How is this happening?   I mean, I literally can’t believe what life is right now.   I watched my husband die just 2 months ago.  I buried him and tried to mourn and grieve him.   I thought that was the lowest I’d have to be, but guess what, my intuition was right.   I knew I couldn’t say ‘things can only get better’ as there’s no bottom in this world anymore.

I persist though and try to occupy my time:

Just, fuck.   I was talking with folks at work on a conference call (obvs – we are all required to WFH now) and this truly is a moment that will be changing the world.  Just like 9/11, things were different after, forever.  Things will definitely have to change after this at a government preparedness level as well as how work and business function going forward.   Even just thinking about when finally we get to see other people in person again, it’s like, until there’s a cure/vaccine, you’ll be paranoid.  And then if another virus comes up, which of course it will, is the world going to be prepared and ready to do what needs to be done to prevent the world from stopping like it kind of is now?   So yeah, just, fuck.  Ha, as I write this, it sounds like I’m commanding you the reader to go fuck.  Maybe that’s not a bad idea either, if you can.   I know I miss Larry for that comfort too.   Having someone to hold and hold you, warmly and/or passionately, is something that I miss so much right now.  I didn’t know that feeling as a man in the closet, so when I did get to finally know what that was, and to now have it taken away for who knows how long?   It’s kind of awful.  I don’t know, it’s just all so much.

So why not some pictures?  Here are some from my first few days of social isolationing:

In Los Angeles, we’ve been getting TONS of rain.   There is occasional breaks which is good so it can kind of dry out, but we have a lot of rain still in the forecast!   And with less people out and about, our air quality is quite good.   I’ve seen news reports that the pollution around the world has dramatically improved due to this – maybe the coronavirus was the planet’s way of making us chill the fuck out on pollution.