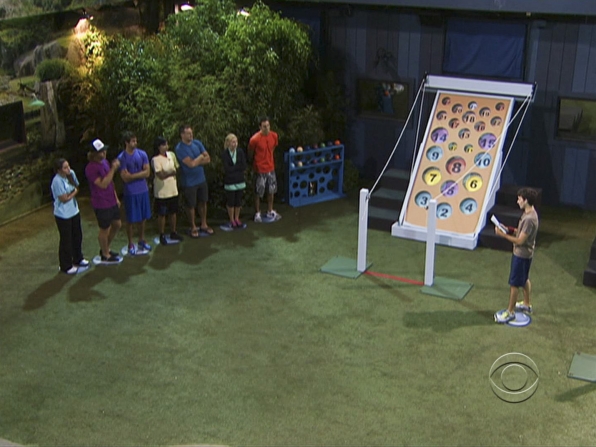 Twenty episodes in? Â Wow! Â For some reason, it feels like so much more. Â I think after the craziness of the double elimination episode, this episode was a more after-the-fact episode. Â Sure, there was the tension of who’d win HoH and then who they’d nominate. Â There was even Pandora’s Box! Â It was still, to me, quite a comedown and the final results ending up setting the stage for what is likely to be an eventful week – it was just that this episode was a little….meh.

So let’s talk about the first part of the meh. Â That HoH challenge. Â Levies and a reverse plinko game? Â Really just not that exciting. Â Of course, everyone was nervous as hell that Frank would win, but the odds weren’t likely, right? Â Especially when he drew the lowest ranking, ensuring he’d have to beat EVERY single person to win. Â And guess what? Â Of course Frank did just that. Â In fact, he was only getting more and more practice in the game each round. Â It was brilliant. Â So Frank won HoH again. Â Unreal.

There were also flashbacks to the last episode that fleshed things out a bit more. Â We got to see Frank’s open hostility to Joe, Ian’s admission he tried to throw the HoH comp, panicked deliberations before the nomination ceremony with Ian on full-on hyper nervous mode, Frank’s emotional reaction to Ashley’s departure, and again, Frank’s open campaigning against Joe before Ashley’s eviction. Â Crazy. Â In the aftermath of that eviction, Frank unloaded his fury making Ian really freak out. Â Britney even jumped in to try to calm him down and divert his rage to her as Ian wasn’t able to handle it. Â Dan tries to coach Ian through this – one reason is to do the right thing; the other? Â Ian is a useful tool for Dan and it’s not time to lose it. 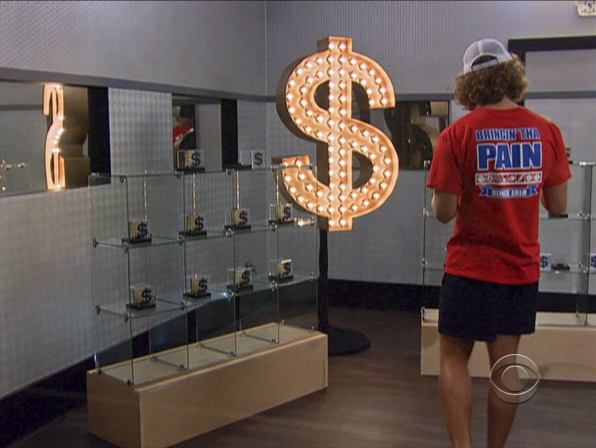 In a stroke of smart planning, Britney struck a deal with Frank before the HoH comp to loosely ally with Frank. Â Frank also approached Danielle to see if she’d be up for working with him and against Dan. Â  She tearfully admits she just can’t turn on Dan – making it that much easier for Frank. Â Frank realizes he needsÂ anybody to align with though and the Britney/Shane partnering is definitely one of the stronger ones he could have made. Â Especially with all the others being pretty useless or in Dan’s case, openly antagonistic.

With the HoH win, Frank then gets the luxury of nominating one person to be the HaveNot of the week. Â Shockingly, Frank chooses Dan. Â At least there’s no pretense or facade – there is open warfare going on here. Â Polite, mostly, but open warfare. Â Ian isn’t feeling all that comfortable either, as well, he did just betray Frank and Boogie and tried really Â hard to evict Frank on the same night as Boogie. Â So with all this insecurity, cue the Big Brother Pandora’s Box event!

Typically, there are two of these in a season. Â One Pandora’s Box typically benefits the HoH and screws over the rest of the house, while the other is vice versa. Â This particular one seemed to have upsides for both parties, although the benefits were very contingent on being lucky. Â In Frank’s case, you can see in the $ picture that he was able to choose just three of the mystery boxes – whatever monetary amount he uncovered would equal to cash winnings. Â There was a chance to win $10K – alas, Frank’s luck wasn’t that great. Â He ended up getting $1.05, then $7.11, and finally something worth it, $3333.33. 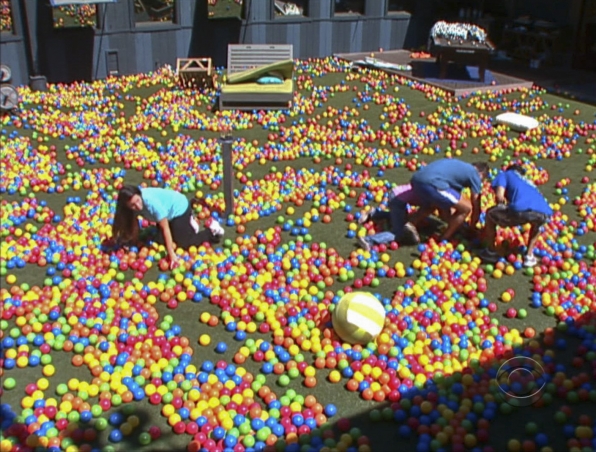 Meanwhile, the other houseguests were treated to a deluge of plastic balls raining from the heavens. Â Some of the balls have change within them to use on the arcade machine, as the mystery ? box was replaced with a Second Veto ball. Â All you needed to play the claw game was two quarters. Â Dan found the first set of quarters and failed, but sneakily lied to everyone saying that he won it. Â Joe discovered he lied and everyone started realizing Dan was playing to win – while also being quite a bitch. Â Multiple attempts and physical tussles later, with Dan and Britney getting thisclose to winning, Ian ended up scoring the critical victory. Â I have strong suspicions that the claw was controlled by producers….but that’s just me being paranoid. Â I’m sure. 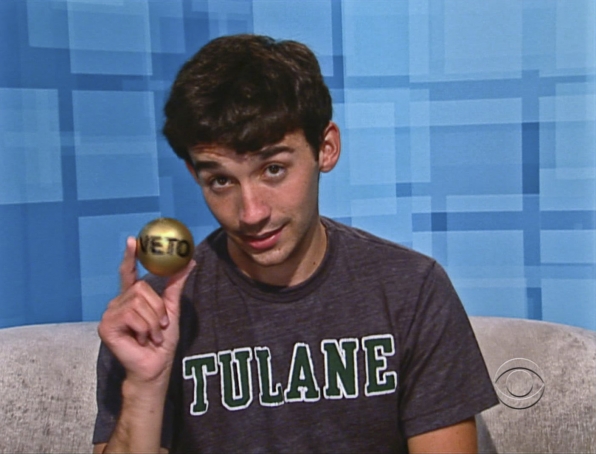 So Ian got himself some security for this week. Â While I’m sure he feels better having it – I’m not sure he NEEDED it. Â I think Frank is on a bigger tear against both Dan & Joe. Â But then the strategizing begins – Frank thinks about nominating Ian & Danielle, forcing Ian to use his Veto at that point. Â Frank reasons he can backdoor Dan that way. But then there’s the notion of nominating Dan & Danielle, but Frank is worried that Ian would use his Veto on Dan. Â Then what if Dan gets to play veto and win the real Veto? Â He ends up thinking that there are two options: Â nominate Dan & Danielle or nominate Ian & Danielle. Â  (BTW, on the Live Chats with evicted houseguests, Boogie predicted Frank would win HoH and have to deal with this situation – he speculated Frank would want to turn the two power alliances (Shane/Britney, Dan/Danielle) against themselves and could do that by nominating Shane and Dan). Â Frank didn’t do that and made it fairly clear that Dan is the target – but I bet Joe is a nice backup just in case!