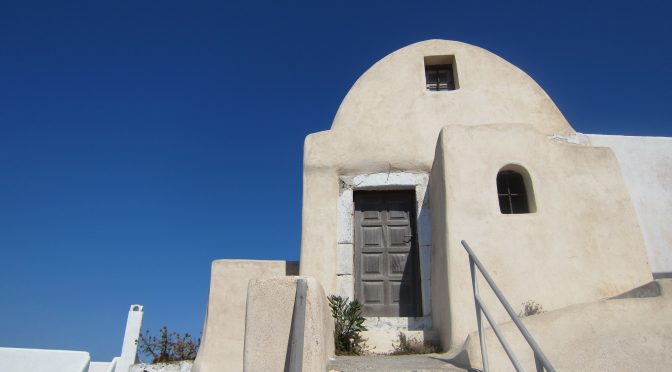 Our first port o’ call!  It was exciting to explore a place that neither of us had ever been to before – especially as that place was Greece.  It had always been one of my favored destinations and one that I hadn’t yet been to, so to not only finally make it there but while on this ridiculously luxurious ship – pure bliss.  In the morning, we awoke to the ship still moving yet outside there were scattered little Greek islands.  They weren’t islands that make you think beautiful and unspoiled – more like the volcanic remnants of what used to be there, which is in fact the case.  Santorini as it is today is basically the remnants of what used to be a huge island that blew up in a giant volcano.  Now it’s an archipelago – many think that this was actually the basis of the legend of Atlantis.

Anyway, Santorini is what many people would think of in terms of a Greek Isle….at least in terms of the countryside and bleached-white architecture situated on dramatic cliffs with stunning Med views.  As the Equinox approached the city of Fira on the coast of Santorini, it became clear that what looked like white-topped cliffs was not due to geology but the city itself.  It clings on the side of these massive cliffs and as you’ll see in the later pics of this post, it ends up affording the town an unbelievable view of the water.  Simply breathtaking.  There is actually no harbor big enough for a ship our size, not to mention the fact that Santorini is a very popular cruise ship destination.  Hence, Equinox docked out in the water and we were taken ashore by multiple skiffs.  This was our first excursion experience and it was almost nerve-wracking to get assigned your tour group number and anxiously await your number to be called.  It finally happened though and after a quick jaunt to the shore, we met our guide (a very beautiful Greek woman – you can see her in the photos if you pay attention) and were ushered on to our bus.

When we woke up the next morning, we were in the middle of the Greek Isles!

As we got around this island, you could start to see the other cruise ships

All of them headed where we were: Santorini, Greece

One day we’ll come back in a yacht, too!

All that white topping? Those are the towns. Yeah, they built up high.

The bus immediately went up the scariest fucking switchback road I think I’ve ever been on.  As I mentioned, there are ridiculous cliffs around the entire island so to actually see the interior of the island, you have to ascend the cliffs.  UGH.  It was nauseating how high we ended up going and seeing how high above even those massive cruise ships we were.  That torture blessedly ended and we ended up driving across the island and through many volcanic-soil-based orchards and vineyards.  The landscape, at least up there, reminded me a lot of Southern California, besides the volcanic part.  Our first stop was to the highest point of the island which afforded us views of the entire Santorini.  It was a beautiful and HOT day, so the views were spectacular.

Bus Ride Up to the Highest Point

We boarded a bus and started up a road that went up….

…and UP….to the point where it was scary to look over as the bus was huge…

…and the road was tiny…..ugh…still have flashbacks.

Volcanic soil is great for growing things, as long as they’re planted low

As you can see, we ended up driving to to the top of the island

It afforded us a dramatic view of nearly the entire island.

Larry at our first stop on the bus

I got some snaggle-toothed model guy to take our picture

..but it doesn’t work so well when you can see my legs.

Not a fan of heights is Larry

So if you want to fly here too

Kinda misty that day due to the humidity

Had to walk urgently to get back to the buses

The second and longest stop was in one of the more ancient cities of Santorini, Pyrgos.  This is basically the city you imagine when you think of Greek Isles.  The stunning white architecture with pops of blue here and there led to all of us in the group being slack-jawed at the beauty.  Our guide took us on a walking tour through it and while it was extremely beautiful (you can see the pics – I didn’t choose that top photo above for no reason) it was muthafuckin’ hot.  Holy god it was hot.  So glad I had a hat and we brought water as otherwise your ass was going to pass out.  Don’t mind me though – it was totally worth it.  We were taken to where the old fortress had once been and saw its ruins along with all these gorgeous little step-filled corridors.  Sigh….it was so beautiful.  Could totally imagine going back there just to vacation and chill the fuck out.

Was pretty much the idyllic, prototypical white-walled Greek town you imagine

Lots of neat, meandering narrow passageways through the village

It was hot, and very nice in the shade

That’s our Greek tour guide, standing in front of the entry to the walled part of the original Pyrgos

Yeah, it was spectacular. Just hot and humid as hell.

That mountaintop is where we just had been.

Remnants of the original castle wall

Sweaty and ready for some Greek mezos and wine!

The blue and white colors here are no lie. It was that beautiful. One of my fave pics.

It was hot and we did lots of steps. But it was worth it to see the view.

I told you, I was sweaty.

I think you can see our ship way in the background

The rest of our tour group. In there is Amy, who would become our best friend on the cruise.

How awesome would that hotel be????

A cafe just down the block from a shop where a HOT Greek man was…think John Stamos..but hotter

This excursion wasn’t JUST a visit of Santorini – we also got some authentic Greek food for lunch!  We went to this great little restaurant with a beautiful view and met some new people for the first time the entire trip.  There were some great couples that we ended up seeing frequently over the cruise, but this excursion was very fortuitous as we ended up meeting Amy at lunch.  Larry & I were kind of the chatty ones at the table and over some topics, it was clear we got along fabulously with Amy.  Trying not to be too awkward about it, we ended up asking Amy if she wanted to hang out again during the trip.  We definitely ended up doing so many times – I think even that night we did as we went to our first cruise ship show and met up with her afterwards to play craps.  That’s when we found out she’s in the advertising industry too!  Small world.  Back to the story though, it was a great lunch and I ate most of the food, surprisingly.

While eating, a weird humidity-caused cloud rolled in. I started thinking about The Mist

Larry, with Amy over on the right. We bonded over lunch.

It was then time to head to our last stop, the city of Fira.  This was the city you could see from the cruise ship and is basically the other city you’d think of when you think of the Greek Isles:  the one that has the ridiculously gorgeous view of the Mediterranean.  Le sigh.  It was mesmerizing to just stare out from any of the myriad walls, balconies, or alcoves and just gaze out.  By this time, the sun was down a bit and the afternoon was growing long, so it wasn’t as terribly hot.   Our tour was also over at this point and our guide gave us our “return tickets” which earned us passage on the Suspended Tramway back down to the docks.  Let me just say….I loved Santorini, but this last part nearly ruined the excursion.  Basically, that tramway is one of two ways you can actually get back down to the water where the skiffs await to return you to the ship.  We were told that you could also walk the stairs down the cliffs.  I won’t claim that I am super athletic or the opposite, but I envisioned either falling or suffering from muscle pain due to thousands of stairs down. Plus, we had been warned that the path reeks since donkeys are also going up and down those in case you want a ride.  So after grabbing an ice cream up top to cool off, we went for the Tram.  As did all the other thousands of people there.  Like I said way before, Santorini is a huge cruise ship destination and there are many more tour groups than just from your ship.  We ended up having to wait about an hour to finally get on the Tram, all while roasting in the sun since there wasn’t any cover.  Long afternoon.  Yet finally, we got on the tram, I momentarily freaked out as I HATE those kinds of trams especially when you’re that high up, and got back to the skiff and then the ship.

Our last stop was getting dropped off at Fira

It’s the city jaw-droppingly on the coast

Looks like something out of Lord of the Rings, to be honest

Hard not to be happy when you’re in paradise

Santorini was once a single island, but it’s volcanic, so there’s now an archipelago

Again…how awesome would it be to stay at that hotel???

Our ship’s on the left

Could easily come back here

There were burros too, if you wanted to ride them on the steps

In the cable car station

And here’s the view of Fira from the cable car

We could have walked the path down…but honestly, glad we didn’t.

On the ground now…our ship is on the right

Looking back up the cliffs towards the town of Fira

The quaint little harbor area where our tenders went. You can see the road our bus drove up earlier.

Once back on the ship, the captain mentioned that the Greek sunset at Santorini was not to be missed.  So after changing and showering, Larry & I rushed up to the deck, used our fantastic drink passes and welcomed the gorgeous Greek sunset with some fine cocktails.  It is nice to be on vacation!

Back on the ship, you can see the walking path etched into the cliff

Our first Greek sunset approached, and as the Captain had told us, it was spectacular

Our weather was freaking wonderful

Perfect time for a drink

Larry was ready to call it a day

I was ready to call it a margarita