With no further ado…..the greatest Big Brother goodbye message, ever.

Rrrrring, rrrrring….What is this telephone doing in the DR?   Hello?  Oh hey, Janelle, no, Mike Boogie’s actually not here but I was just leaving a message for him, is there anything that I can say?  HAHAAHAHAHAAHAHAHAHAAHA!!!!

It’s so glorious because you can almost feel that this is karmic retribution for the many MANY times that he & Will Kirby did this exact same type of send off in their seasons.  Britney is a god.  Here is a Youtube collection of her great performances in her first season (Season 12). 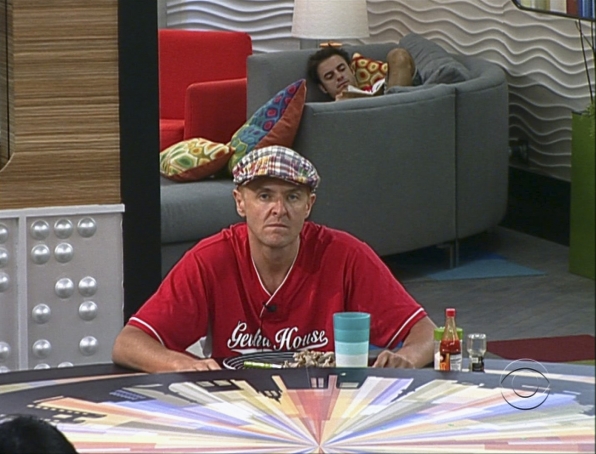 This episode wasn’t just about Britney though. Far from it, actually!   What makes me laugh about this picture is either it’s a random shot that just happened to show a very pissed-off Boogie or it captures his exact state of mind in the time leading up to the first eviction.  And there’s Dan in the background just chilling.  As we saw before the vote, Boogie pulled no punches in his confrontations with everyone.  Oh yeah, Jenn was also upset.  GIRL.  You are a pawn.  Chill the eff out.  So we ended up getting Boogie accusing Shane of being Dan’s bitch, Frank and Boogie telling anyone who will listen how much they hate Dan and Shane, Ian almost revealing himself to Boogie by accidentally saying that it was going to be a hard vote (between Boogie & Jenn)…and Boogie jumping on it before Ian saved himself.  Even better?  Boogie pleads for Ian’s safety after his eviction as he’s “a good kid.”  Oh boy. 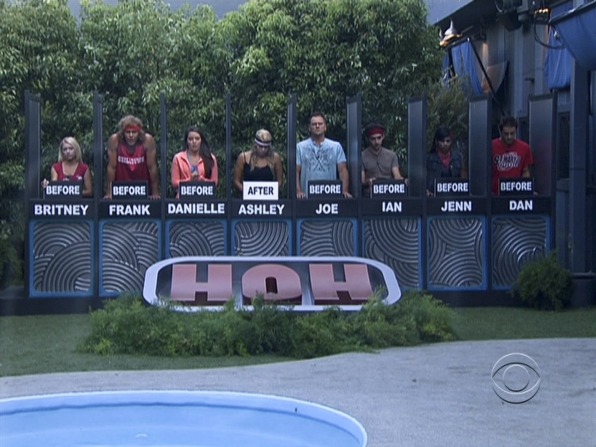 Whew!  That was a lot to get through. That initial segment had quite a bit of intrigue in it, enough to place the seeds of doubt in your head that perhaps Boogie could save himself.  Yet when I first saw the group in the Live living room shot, it was clear there was not much happiness going on.  Despite his best efforts, along with Jenn quite capably sabotaging her own status by completely overreacting to her predicament, Boogie was voted out, with only Ashley and Frank voting to keep him.  This vote by Ashley would come back to haunt her later, but we’ll get to that soon enough.  As Boogie leaves the house, Ian basically confesses to him right there that he was responsible.  Boogie gets a chance to tell Frank not to trust Ian and I have to ask, why would Ian do that?  He knows soon enough the goodbye messages are going to come out and Boogie will know.  He painted a giant target on his back with that stupid act.

Of course the goodbye message from Britney was played to all of the viewing audience’s delight as was Ian’s extended confession.  Instead of Boogie being super pissed, it shows that he really does realize this is a game as his reaction was full of appreciation for Ian’s move.  Makes me like him a lot more than I did previously.  Not that much time to spend with Boogie though as this was a hectic night of Big Brothering, because this was Double Elimination Night!  Apparently the Mystery Question Box will have to wait for another day. 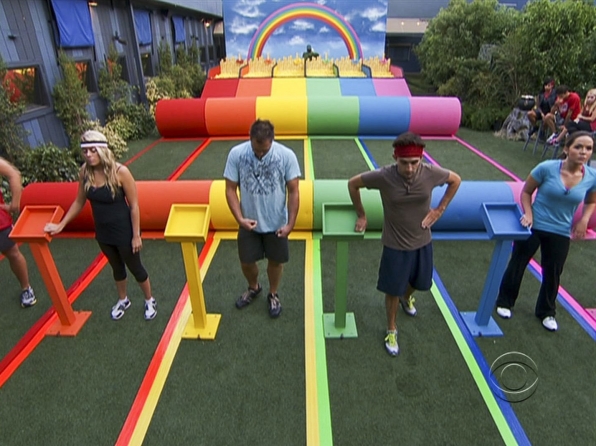 In the HoH comp, which was the frequently-seen Before or After type of challenge, Ian ended up lasting till the end against Danielle.  It ends with a number tie-breaker – both end up going over but Ian was closest so he wins HoH!  As I type this while quite hungover on Sunday afternoon, I really don’t know if this was a good move for him.  Obviously Frank is now targeting him, but it could have been possible to lay low and let someone else draw Frank’s ire. Once he saw that Danielle was up against him, he could have given her the win.  It wasn’t as if the Quack Pack didn’t run off and strategize the moment he won, right?  Anyway, he nominates Frank (obviously) and Ashley (?).  That surprised me but once we heard from her at the end of the show, it turns out this nomination wasn’t a lover’s rejection but a response to her allying herself with Boogie and Frank (and Ian, but that was obviously under false pretenses). 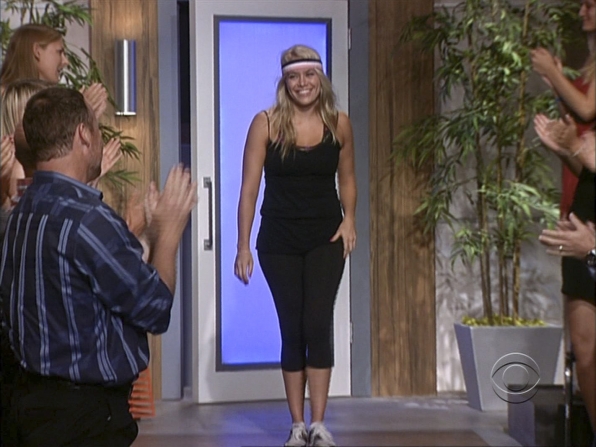 In the veto competition, the six who got to play had to race into a ball pit full of gold coins with two clovers hidden within somewhere.  The first to find them and bring them back wins Veto.  Ashley was never a contender while the others could have been, but Frank was playing to win and that is exactly what he did.  I loved hearing the studio audience’s reaction when he did – it was a mix of groans and cheers.   With Frank yet again safe, the Quack Pack now were confronted with a wasted eviction and it came down to an elimination of a floater.  Ian replaced Frank with Joe, and surprisingly (to me), Ashley was evicted by a vote of 5-1.  Only Frank voted against “terrible chef” Joe while everyone else sent Ashley packing.  I was surprised to see Jenn vote against Ashley, but I’m guessing we’ll find out some more tonight about that last-minute decision.  Perhaps she was clued in to the majority vote or she just didn’t like her.

When Ashley got to meet Julie Chen, girl was OUT OF IT.  As I brought up in previous posts, due to her back problems, it’s been said that she has been given Xanax for the pain. That has to be the explanation for her general demeanor as that is not normal being that glazed over.  She managed to spit out a few things about what happened and in the midst of that word salad we were given an idea that she allied with Frank, Boogie, and Ian and that’s the reason why she’s out.  She sounded hurt by Ian’s betrayal, but honestly, who knows, and I just hope she gets some real medical attention! 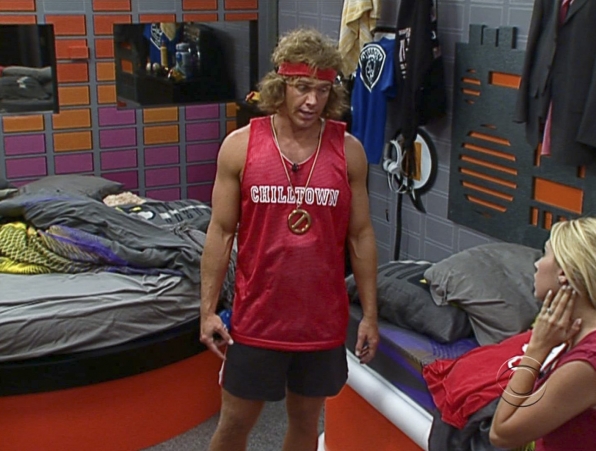 We now have a vengeful Frank left in the house.  He has been the target EVERY single week whenever he wasn’t the HoH himself.  At a certain point, he’s got to feel a sense of pride in his ability to deflect these constant attacks.  It’s unreal that he hasn’t had one week of peace on his non-HoH stints. Through ridiculous motivation and determination, he wins when he has to and saves himself or grabs the HoH power to stay in the game.  If he makes it to the Final Two, I don’t see how he doesn’t win in a landslide.  This group of people doesn’t seem to strike me as a vindictive sort (except Jenn, but that would just be irrationality) so unless he starts verbally berating them a la Willie, Frank is the one to beat.  But there’s only so much a Team of One can do in this house.  The attempt to backdoor him will certainly come in to play soon.  I am curious if he can rally the floaters together but even that is something that seems to be too late to do.  Regardless, Frank’s still in at this point, and he’s fired up.  Plus, the Mystery Question Box is alleged to be the focus of tonight’s episode – CBS explicitly says it’s Pandora’s Box. It will be interesting to see what devilry comes of it.