Jeff and Jordan live in Santa Monica now? Â I think Brendon and Rachel allegedly live out here too. Â I wonder where… Not that I’d really actually want to talk to any of them. Â But I would LOVE toÂ see Jeff and Brendon, because both are damn hot. Â DAMN hot. Â It would be hilarious if they lived anywhere near where Larry & I do, but I would imagine they’re staked out closer to the beach and in any of the number of nice apartments in the 4th through 6th St areas. Â I’m only bringing Jeff up at all because CBS was compelled to waste an entire segment bringing us up to speed on what the latest is with Jeff as well as his relationship with Jordan. Â He’s dragging serious feet before proposing, isn’t he? Â Apparently he has a deadline of next June.

It’s not shocking news at this point since my post is a few days after the fact, but Wil is obviously out of the house. Â I figured let’s just jump to that since I also want to link to Wil’s post-game chat with Jeff. Â It’s HILARIOUS. Â Wil is amazing, and I wish we had got to see more of him in the game. Â He and Jeff definitely bounce off each other well, which you can check out for yourself here:

Apparently Wil has his own variety show on Youtube here: Â http://www.youtube.com/thewilshowÂ  Not sure how that is, but his sense of humor and quick and easy communication style are very appealing. Â Good luck, Wil!

My long-windedness needs a break today, so I’m going to post my Viewing Notes while watching the show and elaborate as necessary. Â You will get a peak into the artistic process! Â Lucky you!

Does Dan have any other shirt? Â – Seriously. Â DanÂ only wears that red t-shirt.

Wil hopes joe digs his own grave – It’s definitely a possibility because Joe certainly has a big mouth and can talk his way in and out of good graces quite capably.

Britney sure that the silent 6 is crumbling – Of course Miss Paranoia 2012 is freaking out. Â When has she not? Â It is mostly true though. Â They were already thinking of turning on Dan (although they didn’t) and no one trusts Frank or Boogie. Â Great alliance.

Joe realizes ashley isn’t on his side – Why would you think Wil’s BFF would side with you?

Frank tells Dan he did think about backdooring him – I don’t think honesty is ever the best policy in this house.

Dan is now set to shank frank – Ha, I rhymed even in my notes. Â That is HOW TALENTED I am. Â Also, yeah, the Silent 6 is so not an alliance at this point. Â Don’t blame Dan for feeling this way, and just like Wil mentioned in his chat with Jeff, Dan is definitely a contender to win it all. Â Again. 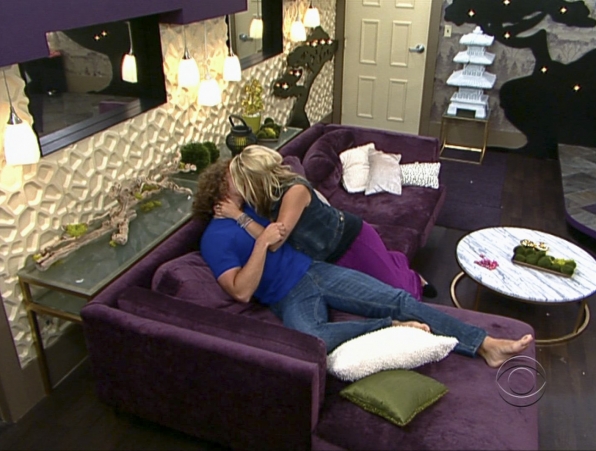 Ashley wants an ice cream date with frank; Ian is jealous – Tricia had heard this had happened and when nothing was brought up about it on Wednesday’s show, I figured it wasn’t going to be a Show Story. Â Wrong! Â Although by looking at it, this didn’t seem like the making out of people who could barely keep their clothes on. Â It felt purely like, “Hey, I’m bored and could really use a good kiss….wanna?” Â You also have to admire Frank’s approach to dating. Â Why not just ask?

Make out on the couch! Â Channing tatum esque? Â – Frank’s body is no doubt nice….but that’s a far cry from the Channing. Â FAR CRY.

Wow Ashley really was going for it – She definitely was going for it…but still, I think it was just something to do. Â Amusing that Ian is possibly jealous but really, there’s no reason for it. Â 1 – I doubt Ian really has a chance with Ashley. Â 2 – Ashley isn’t thinking long term with Frank either.

Wil and joe make their case unknowingly to the quack pack – And the Quack Pack lives! 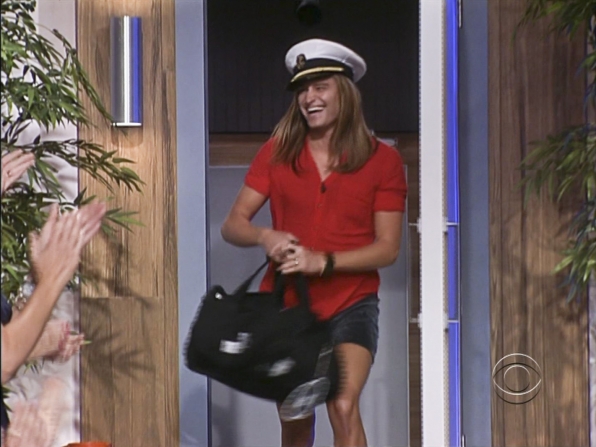 Loved the joe family segment with them saying he needs to quiet down. Also that boogie is an asshole – I typically hate this family/friends segments. Â But I loved that Joe’s family mocked him for his volume and that they hate Boogie.

Jeff’s segment – they live in Santa Monica and not engaged yet. Â Picks Ian to win it. Â – Not sure I agree Ian can win.

Julie would play as a combo of janelle and boogie – Interesting. Â But it is a strong strategy, if done right.

It’s funny how out of the loop the houseguests are concerning current pop culture – It’s got to be a shock to find out all the shit that’s gone on in the world for the last 30-45-60-90 days you’ve been sequestered, whether politically or entertainment-wise.

Wil is voted out – 6-2 – He definitely could have gone a lot further if he had played his cards better. Â There was no need for him to be the target yet he provided the opportunity which the others happily jumped on. 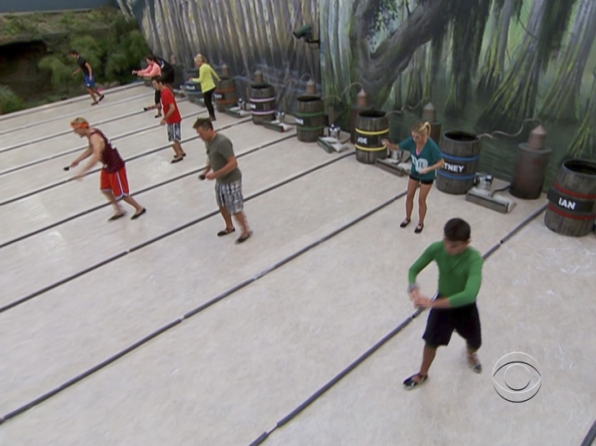 Nice anchors away hat.Â Wil laughs at the name silent 6 – As do we all, Wil. Â As do we all. Â I will definitely miss him but he messed it up himself. Â I’m sure if he had a second chance, he’d figure out the better moves for his own game that would keep him in the house. Â I liked Boogie’s very reasoned and sympathetic take on Wil’s downfall in the goodbye message.

Temptations during hoh comp: safety and 10k – Big Brother definitely dives into their standard bag of tricks for the majority of their challenges. Â I give them mad props for theming and staging, even if the challenge is familiar. Â A good challenge is a good challenge though, and these time-intensive and physically-demanding challenges really test how much you want to win. Â Plus, I think a lot is given away if there are temptations. Â Mike going for the 10K speaks volumes if you pay attention. Â I think I’ve been spoiled already about who ended up winning this challenge – will see if that’s the truth tonight!

Ashley not moving very well – I wonder if she could have just sat down and disqualified herself? Â I know if I had had my back problems and someone said, “okay, now it’s time for you to shuffle back and forth on a slippery surface” I would have laughed right in their face. Â Spittle may have been involved.

Double eviction next week! – The houseguests are definitely aware that this is upcoming, as it always happens every season. Â It’s fantastic to watch everyone scramble and do triage strategizing.