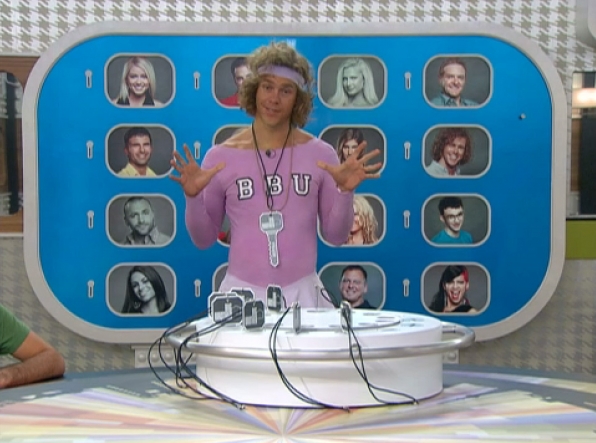 Damn you, Olympics Closing Ceremonies, for being so damn entertaining up until my own network decided to shove a free preview to Animal Practice in the end of it. Â Seriously, wtf? Â I definitely do not work in that department, that’s for sure. Â Because I was enthralled by the Spice Girls (I’ve seriously watched their mini-performance quite a few times now) I couldn’t watch Sunday’s Big Brother until yesterday, and then my sheer laziness kicked in and I didn’t write anything about it until NOW. Â Whew. Â You are now caught up. Â Imagine that I said all that in Joe’s REALLY LOUD VOICE BECAUSE THAT WOULD BE AWESOME AND WOULD BE THE ONLY WAY FOR YOU TO KNOW WHAT I WAS THINKING. Â The ONLY WAY.

I can’t get over how ridiculous Frank’s outfit is. Â Look at that neckline on that outfit. Â He quite capably fills it out, but still….pink leotard and a nice 80’s pink headband. Â I was compelled to see how he hid his junk because unitards are not forgiving in terms of hiding things and it seems he was given some kind of shorts/skirt to wear, making the outfit even more ridiculous. Â  Less obscene, but more ridiculous. 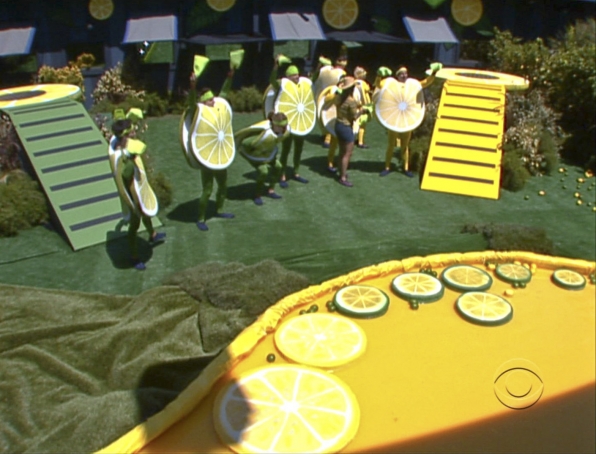 Before I get too much into the nitty gritty of the decisions and strategizing done this episode, let’s knock out any discussion about the Have/Have Not competition. Â Ashley didn’t play (more on that later) and she ended up tying her fate to whatever happened to Frank, leaving an even split of 2 teams of 5 each. Â Big Brother has had this kind of competition many times before in which each player wears some ridiculousÂ soak-ableÂ outfit so they can use it to transport liquid to some giant vat which fills up containers. Â Surprisingly the only part of this competition which entertains me is the sheerÂ homo-eroticismÂ inherent to it. Â Previous seasons have been RIDICULOUSLY obscene in terms of what looks to be happening between two presumably straight males. Â This episode was okay but the large lime and lemon slices prevented it from getting too dirty. Â There still was some uncomfortableness to be found, as told by Ian. Â Even the lesbians got some notice, again from little miss forest fawn Danielle who couldn’t get over the fact some big lesbo was all ON TOP OF HER DOING SEXUALLY CHARGED MOVES TO GET HER TO RELEASE HER LIQUIDS. Â Danielle was very shocked and didn’t know how to feel. Â Lesbians!!!! Â Despite some kinks in a hose, the green all-guy team ended up winning, casting the lemons as Have Nots for the week. Â They ended up getting candy canes and cod, a very odd pairing indeed. Â Danielle’s naivete came out again with her utter disdain for slimy fish. Â Have you ever heard of cooking the fucking fish???? Â As you can infer, I grow weary of Danielle. Â Her voice is almost as bad as Joe’s. Â It’s a high-pitch shrill that REALLY gets annoying especially when you hear what she’s saying. Â For the love of God….please stop this showmance. Â CBS, do something!!! Â Shane is clearly not interested. Â And that’s all I have to say on that for now. 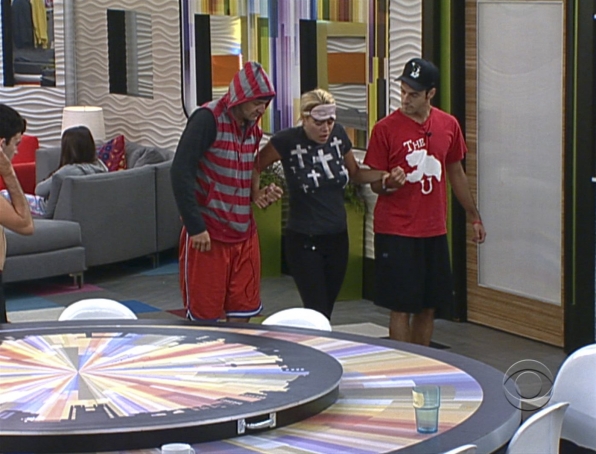 Poor Ashley. Â I can totally relate to back/spine issues that basically incapacitate you. Â Thankfully Physical Therapy has been a wonder as has a slow and steady phasing in of increased exercise, as knock on wood, my issues are pretty much gone. Â I keep expecting the pain to surprise me one day – I’m sure it will happen too. Â But this is about poor Ashley. Â An article in Gawker about Big Brother mentions that they think she’s on Xanax and has been for a little while, explaining her completely out-of-it performance at the last HoH comp. Â If she is, then man, she is really not going to be trouble for anyone in the foreseeable future. Â Perhaps being a drug addict (legal drugs, of course) is a good strategy. Â No one thinks you’re a threat and they can convince you to do ANYTHING. Â Thanks, Joe! 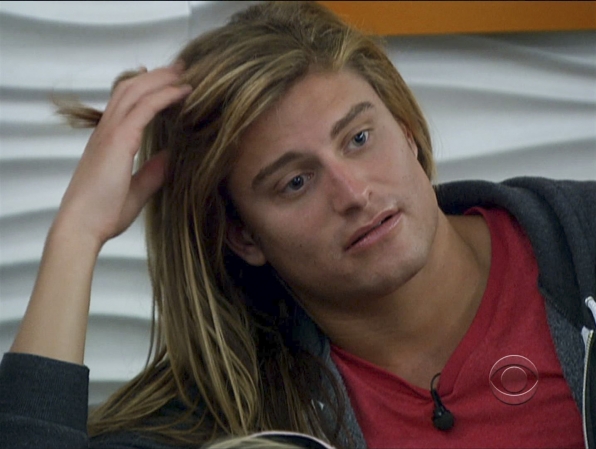 On to the strategy talks! Â Obviously Joe was ON THE OUTS AND IS ON HIS OWN AND CAN’T BELIEVE HE WAS BETRAYED EVEN BY HIS OWN TEAMMATES WIL AND ASHLEY IN VOTING JANELLE OUT. Â He seemed to be the only one unaware of the fact that Janelle was a goner – hell, even Ashley the Xanax Queen was clued in. Â Now he’s Target #1. Â But who is Frank/Boogie’s second nomination going to be? Â Well….. let’s break it down:

Option A) Wil. Â He wouldn’t be a true target, but as a former Janelle team member, an easy pick nonetheless. Â With Joe a completely easy elimination target this week, Wil should have been okay. Â Except when he decided to talk to Frank and Boogie in the HoH room and completely destroys his game in the process. Â You see, not showing any kind of initiative, gameplay, or humbleness/contrition to the men in power can be unsettling, especially if those guys in power are Frank and Boogie. Â No sooner did Wil leave the door did Boogie have his knife sharpened and decide Wil was the new target. Â Especially with Frank really not being a threat.

He goes with Option A. Â Wil is blase about it and I can’t tell if he’s just not worried or doesn’t care if he gets evicted. Â I want to believe he is here to play the game – plus, his sarcasm is on a level with Britney, and double sarcasm is double Super Fun Time in my book!