All hail the return of the Zingbot 3000! Â Oh boy was that a good session. Â The regular cheesy barbs were thrown out there, including some against Frank for his hair, Boogie for his age, Britney and the Brigade….but DAMN. Â Zingbot saved the best for last…by FAR. Â JustÂ look at that picture of Danielle. Â Girl is MAD….. Â Love love love Britney’s face as it really captures exactly how everyone in the room was reacting to this gem:

Danielle…the only gift Shane is going to give you after leaving the Big Brother House….is a restraining order

Double damn….Ms Fatal Attraction just got pwnd by a fake robot. Â Her face in the picture says it all. Â She’s embarrassed because it suddenly became true for her. Â Especially with everybody laughing. Â I think Zingbot just saved Shane a lot of trouble as he already was trying to deal with just how the hell he could deal with BunnyBoiler. Â By far the best moment of the show last night….especially considering the c*cktease the rest of the episode was. Â Anyway, here’s the deets for the episode: 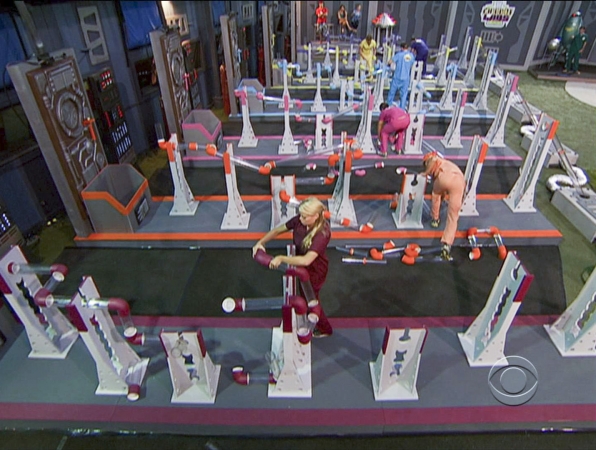 This post is probably not going to be anywhere near being my longest, as frankly, there are two major things to talk about: Â The Veto Comp and The (non)BackDooring of Dan.

Concerning the Veto Comp – it followed up with the theme of the Zingbot, this time it being about building Baby Zingbot. Â I really liked the challenge as building pathways via tubes is just such a geeky and fun thing to do; but, under stressful time constraints and a lot on the line, suddenly a fun little activity becomes awful. Â Evidenced by how most of the players did in this challenge, it was far from easy. Â Frank pulled off the win, having received coaching from Boogie and Ian. Â Shane was getting help from Britney as well, while everyone else was basically on their own. Â That didn’t please Wil in the slightest. Â It probably didn’t affect Ashley at all as she was still trying to recover from her back spasms and heavily medicated (presumably).

Regardless, Frank helped create Baby Zingbot (Zing, Zing!!!!) which was suitably adorable. Â Frank now also had to decide what to do with this Veto power. Â This leads us to the other major thing to talk about…. 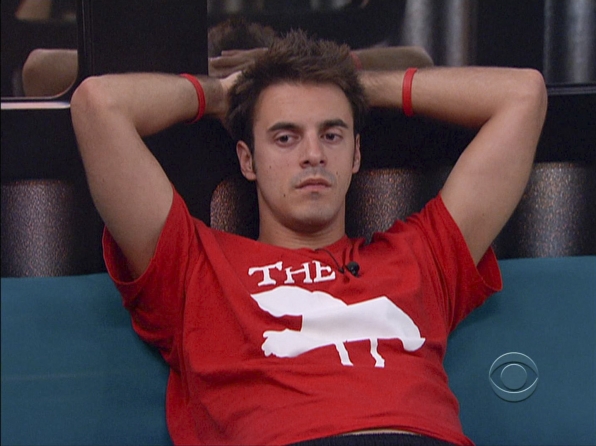 ..that thing being the complete non-issue of taking out Dan. Â You see, I know and fully recognize that CBS/Big Brother has to fill the episode withÂ something. Â With Willie long gone and the Janelle plotline over, what the hell else can you talk about? Â But the show spent a shit load of time on the idea of Dan getting backdoored that it became quite clear that it was never going to happen. Â CBS (hell, all the networks, really) can’t help but over-do it when it comes time to hint at things to come. Â Survivor, Amazing Race, Big Brother – these shows are mostly terrible when it comes to trying to surprise you. Â As soon as you see that some particular plot point has been harped on for say…two segments…you can take it to the bank that the opposite (and obvious) thing is really going to happen. Â Case in point? Â I believe there were 3 segments in this episode with discussion about Dan getting backdoored (heh). Â I wanted to believe that Frank would do it, as it would make for good television and frankly, it makes sense (even Dan admitted that it would make sense). Â Alas, it was all much ado about nothing. Â Whether it was Boogie’s counseling, Ian‘s scrambling (in order to save the Quack Pack – LOVED Britney’s shame in saying that term in the DR)….who cares? Â It was never going to happen. Â Frank himself said, with confidence, that it was way too soon to make huge waves like that. Â Oh well.

So it’s either Joe or Wil tonight. Â Most likely, they’re going to vote out Wil. Â He is a sneaky bastard and a very big threat (although while he has a good body, I’m not sure he’s proven himself to be a challenge threat), but I love his sarcasm and complete ability to see through bullshit (although I maintain he still made a mistake turning on Janelle – his immediate eviction being Exhibit A). Â Joe’s just too much of a non-threat to get rid of at this point. Â Wil’s attitude sealed his own fate as well.