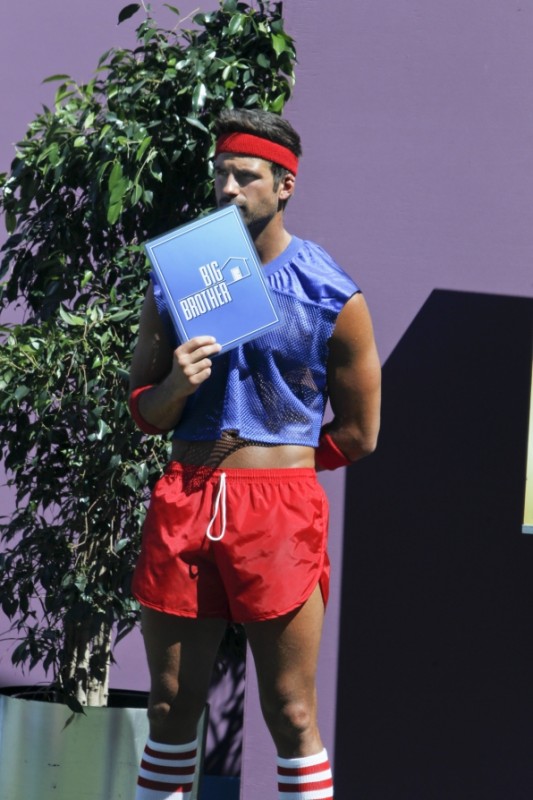 In this revealing episode, we saw that not only was Dan pretty much terrible with his tongue (ha!), Janelle is a sexually-capable BEAST. Â It was also an interesting episode in which everyone angled to wipe last week’s events away from memory so that Britney & Shane wouldn’t be tooooo bitter about the way they were treated. Â “C’mon guys, it was just a game and we HAD to ostracize you…for the game.” Â Hhahahahahahhahaa! Â But naturally, the main reason this episode was pretty amazing? Â The picture right here…. Big Brother producers know exactly what gets ratings: hot guys in hot outfits. Â Shane in that ’80s-inspired getup was pure….well, you know. Â As long as he and Britney are in the house, I am a locked-in viewer. Â GUARANTEED VIEWERSHIP.

Immediately upon the episode’s start, it was clear that Shane winning HoH was pretty much the worst-case scenario. Everyone was counting on being able to get rid of him next in order to not have to cause too much drama for another week, but alas, Mr. Hot Running Shorts Himself knocked out a magnificent miracle at the HoH comp. Â As realized last week, Shane is more than just a really hot body and face – he is well aware that this week of power isn’t indefinite and if he doesn’t plan ahead correctly, he’ll be targeted yet again next week. Â And if he is really smart, he’ll realize that they’d try to backdoor (heh heh) him. Â Britney loves not being the oppressed and sad, beaten-down Britney is a distant memory – girl is Lord Queen Bow-To-Me now. Â LOVE IT. Â Even Janelle is having to eat some crow and tries to wipe away the sins of the past, but let’s be honest, it wasn’t a misunderstanding. Â Janelle and Co. completely threw Britney under the bus when Willie went on his rampage in the house. Â I’ll give props to Janelle for trying, although as we know, it was pretty much wasted effort. 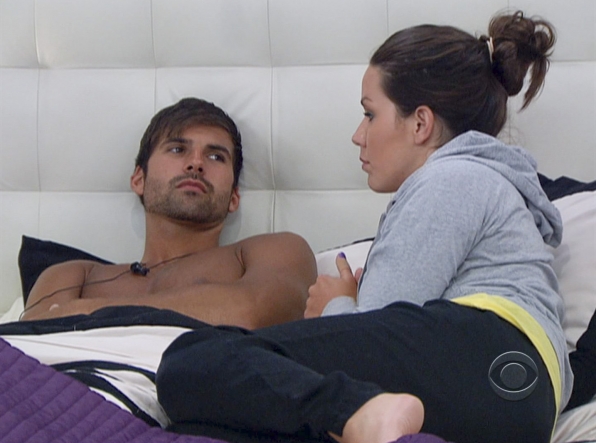 In the completely awkward HoH world, Danielle shows that she REALLY wants her some Shane. Â She’s over the slight from last week when Shane seemingly chose “Staten Island” (aka JoJo) over her and she just wants a piece of that. Â I think she mainly forgot that this game was going on as all she could talk about was if they made it to the final 2, they’d be all alone and then…. Â What, Danielle? Â Cookie time? Â Oh, you intend to see what is under those short red shorts? Â GIRL, I’ll cut you. Â But it was amusing that she couldn’t stop talking about their inevitable showmance. Â I worry for Shane….as Danielle could go over the edge if he rebuffs her advances. Â I’m sure he knows to play it up for all its worth now, but eventually girl is going to show her true (crazy) colors. Â Just sayin’. Â  Also…where the hell is she from? Â Her reaction and subsequent admission that she’s no longer “afraid of lesbians” (because Jenn wasn’t totally super-dyking it up and leering at and grabbing her boobs every two seconds) was straight outta some backwoods nonsense. 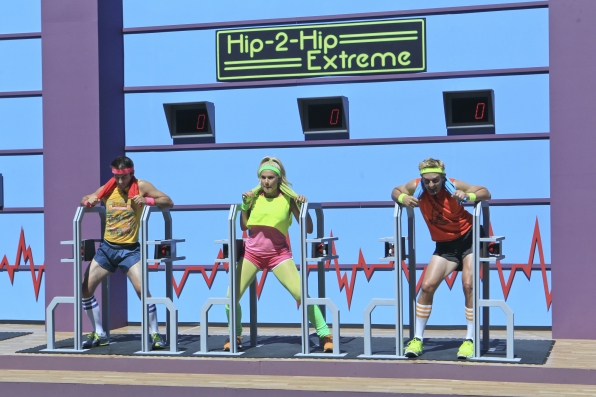 Then we have the Coaches Challenge. Â There are some things that can never be unseen….Boogie’s “moves” and Dan’s “tongue action” are included in that list. Â As many have noted and I’m sure as many were saying while watching it go down, Janelle’s husband is probably a very satisfied fellow. Â Girl had the thrusting (good lord that was dirty), the hip/booty shake, and the licking/tonguing (ick) down. Â What producer came up with this idea? Â How do you even explain this idea to the production team? Â When I think about it, all the coaches challenge have been fairly ridiculous, from the Derby race, the MCHammer Pants balance beam, and now the Sexual Olympics. Â I guess CBS really wants to see how much the coaches want to protect their team! Â Britney was out fairly early but she really didn’t have to put in any effort, what with her only having one member. Â  In the end, Janelle won and gave Wil immunity, which he unknowingly desperately needed as he was Target #1. Â Britney gave the Have-Not status to Ian and Joe (Ian volunteered and revealed that it’s his strategy to take the punishments so that others would consider keeping him), Boogie got $10K but had to split it, keeping $6K for himself (was that REALLY the smartest division choice?), $3K to Ian (who couldn’t keep the tears from flowing at this influx of much-needed cash) and $1K to Jenn. Â  Dan received a sushi party for 6 and made sure that all the coaches were there together (no scheming opportunities) along with Shane and Danielle. Â Not a bad set of rewards for this competition! 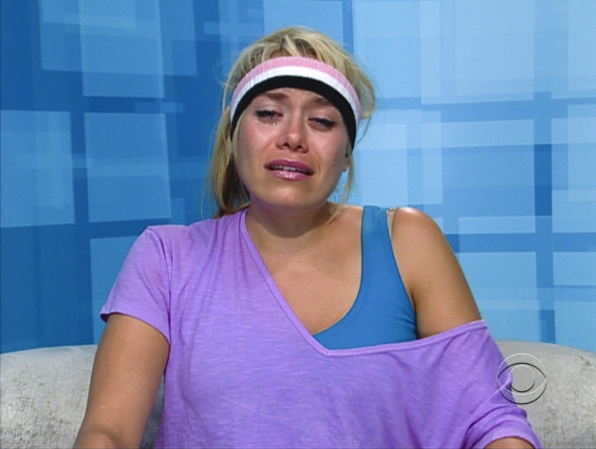 Finally, it was time for nominations. Â What’s crazy is that in this case, it was clear that Shane really didn’t know what he was going to do. Â Britney was doing her best to get the info out of him but he truly didn’t know. Â With Wil out of the line of fire, Shane was weighing going back on his word with Frank and nominating him and one member of Janelle’s team, ensuring that those two teams had to turn on each other. Â His other option was to target one team exclusively – nominating two members from the same team. Â Boogie and Frank both guaranteed Shane that they’d have his back if he didn’t turn on them but Britney was more for taking out the strongest opponent (Frank). Â With absolutely no one sure what Shane was going to do (which admittedly is strange – typically at least someone else in the HoH’s alliance will know), the surprising nominations revealed he kept his word to Frank and targeted Janelle’s team exclusively, nominating Ashley and Joe. Â Ashley, as pictured here, was immediately in tears and distraught, just like every female nominated thus far (except Staten Island). Â Joe swore revenge against Shane. Â Janelle is ready for her game to begin, and that could be an intimidating thing for anyone who hasn’t had to deal with an angry Janelle.

It’s interesting to see that Boogie has successfully positioned his team to remain intact after this week. Talk about some lucky breaks and effective deal-making. Â I may have to give him more credit if it ends up with him and his team being the last ones standing. Â It remains to be seen if the coaches will re-enter the game…hopefully they don’t.