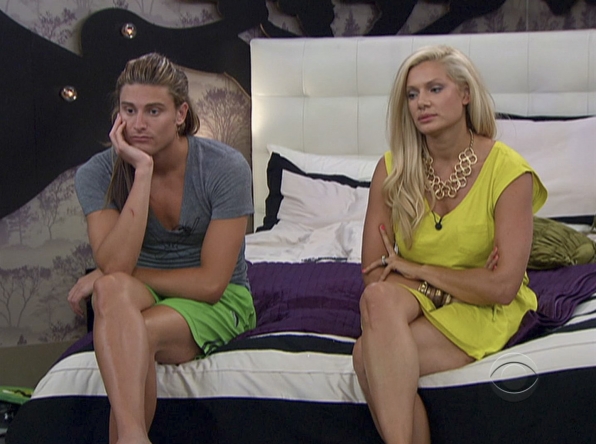 Now we’re talking, people.  Am I talking about Big Brother’s continued ability to feature Shane’s toplessness?  Of course and Obviously.  But I’m also talking about the fact that some game is finally being played.  I kinda always hate when alliances stay intact the entire run of the season.  Sure, The Brigade from two seasons ago did a very rare thing by sticking together (for the most part) but damn, it was boring.  What I wouldn’t have given for Lane to have dropped the Brigade to save Britney.  Still can’t believe those two didn’t end up together, but apparently she was engaged back then.  They were such a cute couple.  What?  Okay, I digressed.  My bad.  Anyway, GAME WAS PLAYED, and even if it blows up in Shane’s face in the end (and let’s face it, if Janelle is involved, even if she’s offering you jewelry, you better be prepared for her to screw you eventually – she is one competitive girl), his decision at the Veto Ceremony was a welcome surprise.  For those of you who can’t bear to read my interminable ramblings: 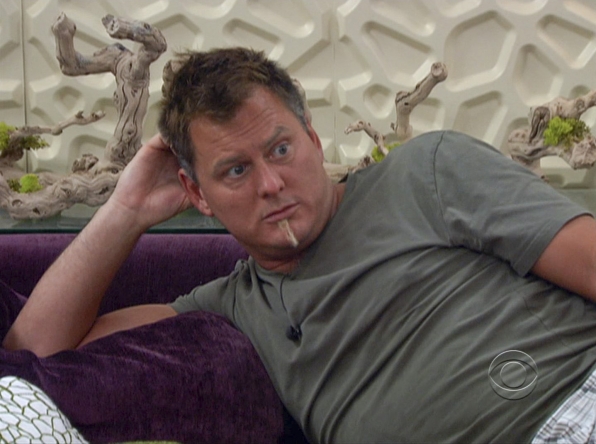 Can I just say that I love how snarky the Big Brother producers can be?  Their always embarrassing soundbite they throw in right after the recap segment but right before the theme song is always hilarious.  In Rachel seasons, it was pretty much ALWAYS some idiotic thing she said.  This time, it was part of Ashley’s nonsensical dream board dissertation.  BB knows that it has comedy gold in these soundbites.  Anyway, the aftermath of Shane’s nomination was the immediate focus.  Janelle knows her way around Big Brother but JOE, WHO TALKS IN ALL CAPS SO I MUST WRITE ABOUT HIM IN ALL CAPS BECAUSE IT ONLY SEEMS RIGHT AND BECAUSE YOU’LL HAVE TO TAKE HIM TO THE HOSPITAL BEFORE HE QUITS AND WINS VETO AND IT IS ON AND THERE IS NO WAY HE CAN DEAL WITH SHANE…. Joe, fucking indoor voice please.  PLEASE!!!????  What was I saying?  Oh yes, Joe tried to take Janelle’s advice of basically “suck up to the HoH” but Shane’s appalling “lack of integrity” or whatnot meant that he just couldn’t lower himself to do that.  Ashley was already good with it and even her tears from last episode were replaced by giggles, so seriously, what the hell is with her?  There are some CRAZY (uh oh, am I Joe?) chicks in this house.  Mark my words, crazy will come and it will be glorious to behold.

Joe admirably took a shot and chatted with Shane and Britney in the HoH room for a little while, but he inevitably just had to be honest and tell them he’s pissed and he’S GOING TO WIN THAT VETO AND YOU BETTER WATCH OUT!  You may wonder why I like Britney so much?  It’s because her impressions of others are so fucking hilarious – yet accurate – so when she mimicked Joe in the DR as well as with Shane I was dying.  I loved Britney’s impression of Janelle as well after Janelle did her damnedest to put Britney at ease about her position and that she “was totally cool and everything’s great.”  Please never leave the house, Miss Brit.  Shane ends up rightfully confused as to why Joe came to him in the first place and Janelle realizes accurately that if the Veto comp goes poorly, she has a lot of work to do to save her team. 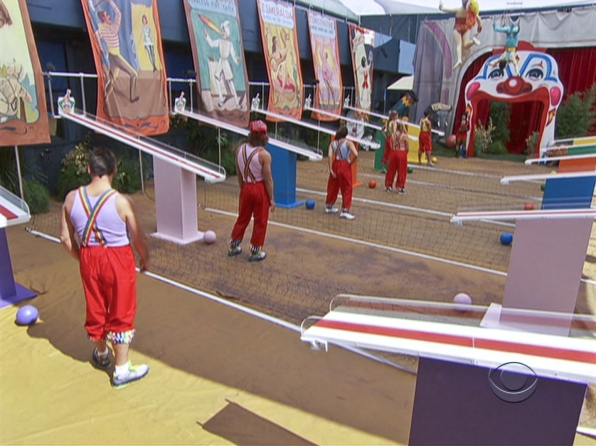 Veto Competition Time!  Janelle’s team HAD to win the Veto.   Joe’s worst nightmare was if Frank was a player, and as luck would have it, that’s who Joe randomly picked.  Danielle and Wil also got to play which meant Janelle had a true 50/50 chance of one of her players winning.  The competition required the HGs to keep two balls from falling to the ground (rimshot!) from their incline ramps.   Easy enough to do but easy enough to also fuck up.  Surprisingly (or not), Wil and Joe were first out, with Frank and Danielle shortly out afterwards.  Amazingly, Ashley was the last one up against Shane, although nothing can beat His Royal Hotness Shane from a Veto win.  3 in a row!  I think that calls for a day of no shirts to be worn and only the smallest of shorts, if desired. 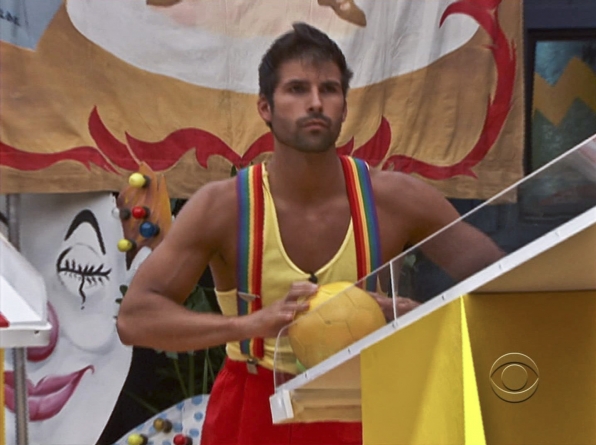 What’s that, a Shane picture?  Why, I’ll only be too happy to oblige.  Voila!  What I happily noticed was that this clown outfit was goofy looking in this particular setup, but as he kept wearing it throughout the rest of the day, it started to resemble a fireman’s suspenders.  That’s when the daydream really kicked in.  This man really is good looking – he resembles Brendon from last year but he seems to not be quite as numb-skully as him and frankly, a touch hotter.  What the hell am I writing about?  Oh yeah, so Shane won Veto and Janelle had to get into overdrive to save her team.  Surprisingly, I think Janelle did it.  After offering her jewelry to Shane and Britney (who amusingly took it at first admiring herself in the pieces) to prove that Janelle & team could be trusted for long-term stability (let’s just forget about that first week’s under-the-bus throwing, shall we?), she then turned to a very proven tactic:  Highlight the fact that Boogie is a scumbag.  🙂  That works for me.  Alas, Shane wasn’t about to sell out his alliance mate that fast.  Or was he? 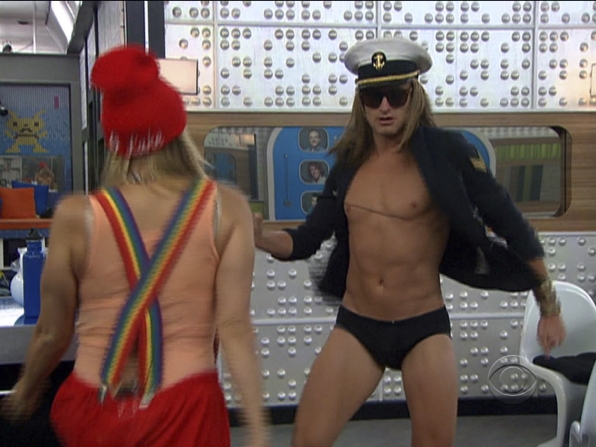 Before we got to the Veto Ceremony, it was time for the Coaches’ Competition Sushi Party reward.  Outside in the backyard it was a nice contemporary affair (LOVED the furniture they had laid out for it) but those who weren’t part of the Sushi Brigade decided to celebrate Wil’s birthday the only way that made sense:  Wil wore just a speedo and some Naval Officer gear (like I noticed the first day – Wil has quite a hot body himself;  his hair is just so off-putting though;  until Wil turns around, you swear you’re seeing a girl!) as the indoor group had a raging kegger.  The Sushi Brigade wanted in on this so after dining on sushi with forks (Danielle, really?  You too, Shane???? W. T. F.?) everybody came in for a game of Spin the Bottle – and guess who was a happy happy girl?  Not me, dummies.  Plus, I don’t go for getting called a girl, gay status not withstanding and the fact I sometimes squeal like one when I see Danell Leyva or Nathan Adrian do something Olympics-y.  Just saying.  Okay, what was I talking about again? Oh yes, Ms. Fatal Attraction got to have some kissy kissy time with Mr. HereAreTheForksForSushi.  I loved how everyone was really doing their best to make it happen for her as it isn’t completely obvious at all that Danielle is throwing herself at him.  Not obvious.  At all.  Did you see how over the moon she was after the kiss?  My goodness, the girl is acting like she’s never been kissed before….and you know what?  It’s possible that’s the case.  She’s a cute girl so it seems unlikely, but you never know. 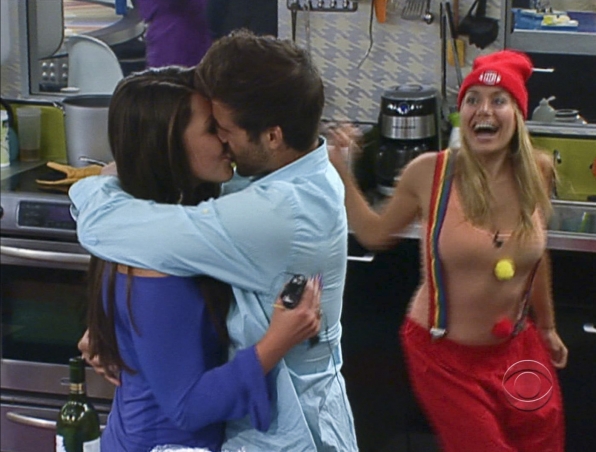 I am still predicting that this will end badly for Shane.  Not the Veto stuff.  Danielle.  Danielle is a problem and there is no solution for it as she is in “luv.”  But that is a crazy kind of love especially in this house.  Shane will do something that pisses her off and oh boy, it won’t be good.  Not at all.  So let’s take a look at this picture to the left of happiness and smiles and kissy-faces.  As it will not last.  At least, those are the vibes I’m sending out to the world as I really want this to get scary and dramatic.

Alright, so the Veto Ceremony is coming up and Boogie and Frank are feeling SUPER because Shane has no reason to not trust them and they have a deal….but all is not well, as Britney talks to Ian, Ian gives the worst answer ever, and Miss Paranoia 2012 returns to the Big Brother House!  And just like last time, her paranoia infects the HoH – although I think this time, I agree with the final result.  With Ian’s noncommittal response signaling to Britney that Boogie’s team can’t be trusted, Shane begins to agree.  He comes clean with Frank about the suspicion and Frank does his best to defuse the situation. It doesn’t work though and strangely, Frank doesn’t run to Boogie about this potential problem, as Boogie goes into the Veto Ceremony still feeling like he and Frank are sitting pretty. 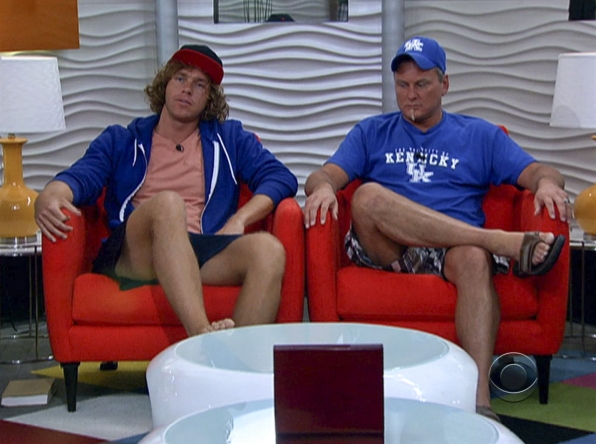 Suddenly all the doubt that Janelle was planting into Britney’s and Shane’s heads seems all too real, and at the Veto Ceremony, Shane decides to use it and save Ashley.  The editing made it look like Shane could backdoor Frank or possibly punish Ian and scare him into playing smarter, and surprisingly, to me, he backdoors Frank.  Frank doesn’t seem too surprised, but Boogie certainly is and storms out of the living room.  Janelle cackles with glee and even tells us that she is the true PuppetMaster in this house, not Boogienocchio (sorry, I tried my best to make that work).  Frank really is the strongest competitor besides Shane and I’d be surprised if he can survive again, now with Janelle’s team fully against him.  We shall see though if Boogie can cause some chaos.  I just wonder if Shane has managed to secure his safety somehow or if everyone will go back on their word to him.  The next HoH period will definitely determine a lot.   Shane’s safest bet is if Danielle can win, but unless it’s a bunny-boiling contest, I don’t think she’s much of a threat.