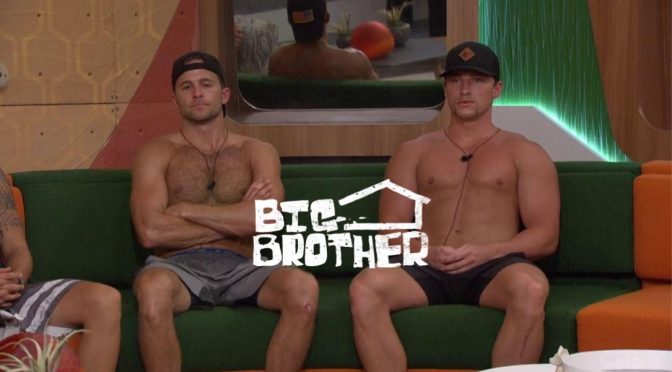 oooo, girl, this episode was delicious, following up on the previous episode in which Scottie put his big boy pants on and made a bold, declarative move against Winston & Brett (the Bros) and put them on the Block. 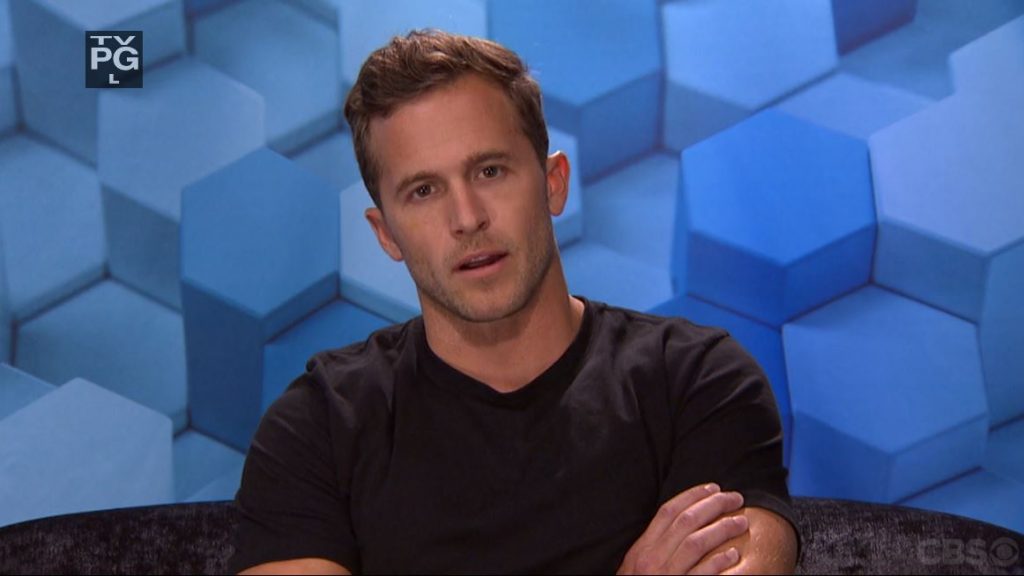 The most butthurt of the Bros was Winston by a country mile.  What he doesn’t get (and which Brett mostly does) is that this game wasn’t set up for others to lose so you could waltz in with your bromance and easily win.  You have to play and shmooze and charm…and it’s clear that Winston hasn’t had to do that much in his life (he’s in sales??).  Brett apparently has a “mist” though and part of me wants to know more and subscribe to that newsletter and another is like “EW.” 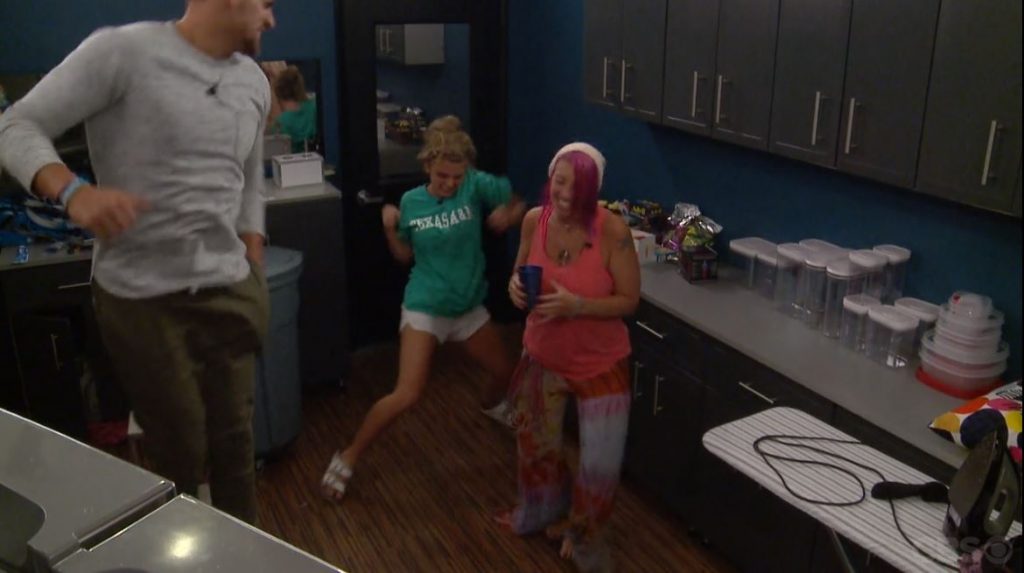 Some are certainly happy about the nominations, especially the remainder of FOUTTE, as it’s not one of them and even better, it’s a huge target set.

Salesman of the Year 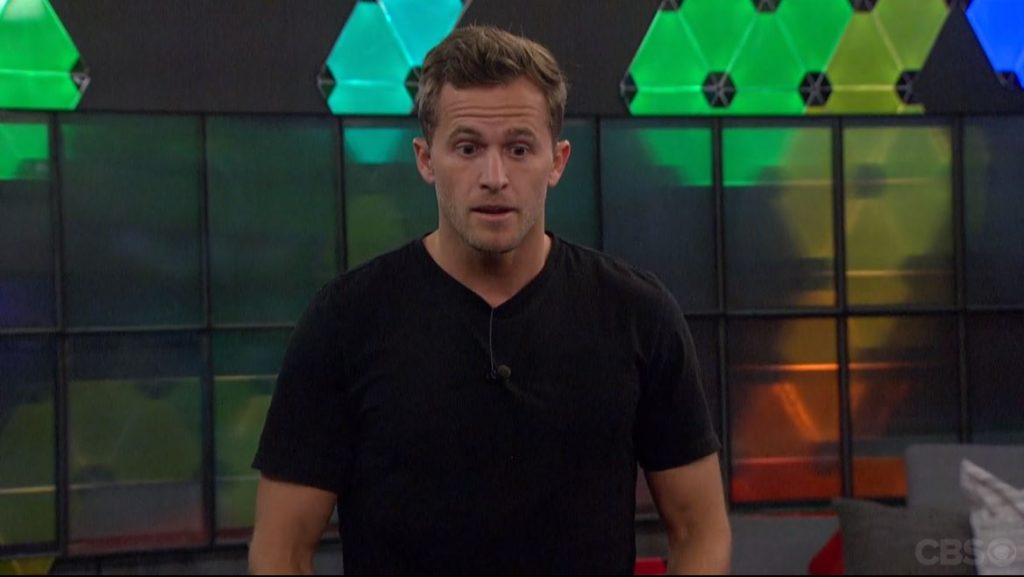 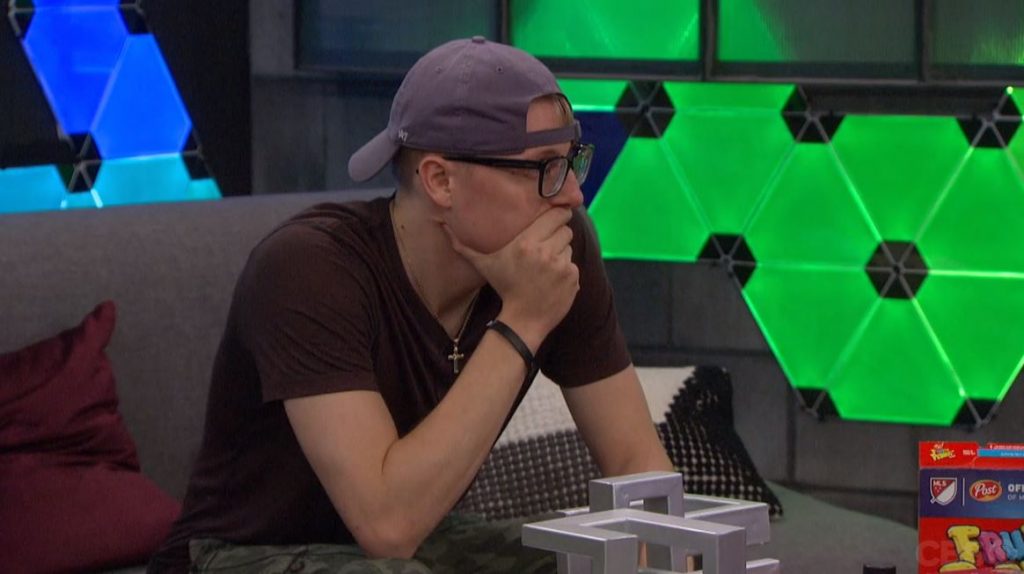 Winston is so incensed at his nomination that he knows that he likely won’t be able to keep his cool when talking with Scottie…and whatta surprise, he immediately threatens Scottie with repercussions and destruction.  The nerve of this “dork” to put one of the cool jocks on the block!   Everyone, THIS is how you win hearts and minds.   Grrrl, tone that shit down, take your shirt off, and get back to being a voiceless hot body in the background.  Alas, we now know way more about Winston’s personality after this episode and it’s not to his credit.

I had to scratch my head a little when I saw that the product placement was an NBCUniversal/Comcast product.   Big Brother is a CBS brand, right?  Anyway, I am hoping to see the movie despite the utter unnecessaryness of it – ABBA and Greek islands?  Yes please.  Anyway, the Veto was themed around Mamma Mia! Here We Go Again and not only will the winner of the comp get the Veto, they also get a trip for 2 to Greece!!!  That’s kind of awesome. 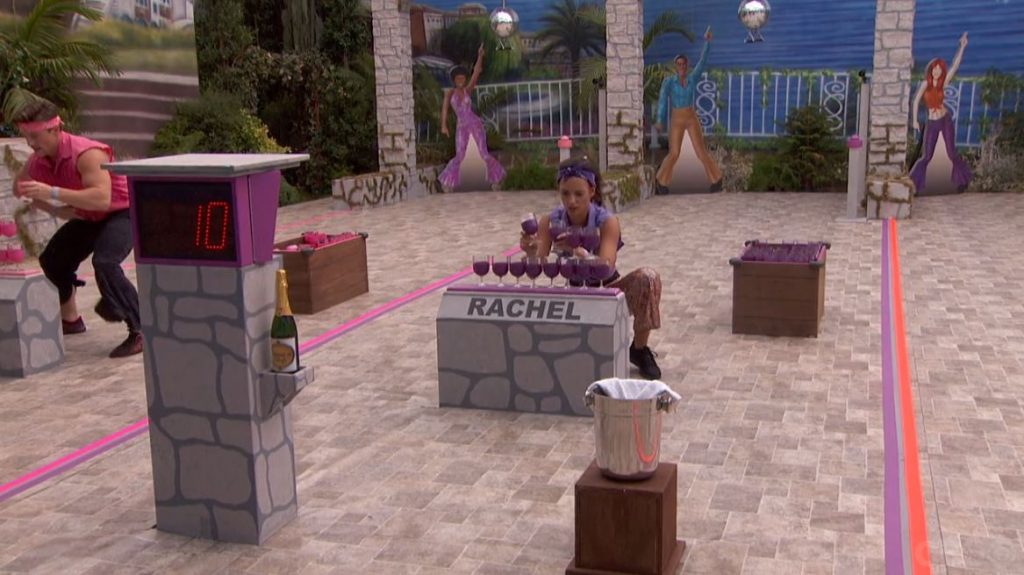 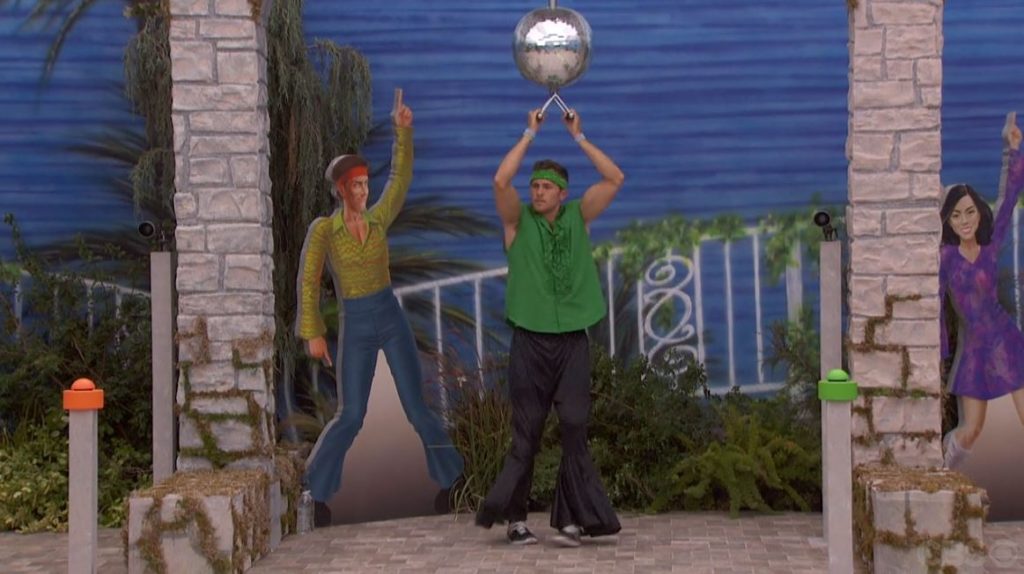 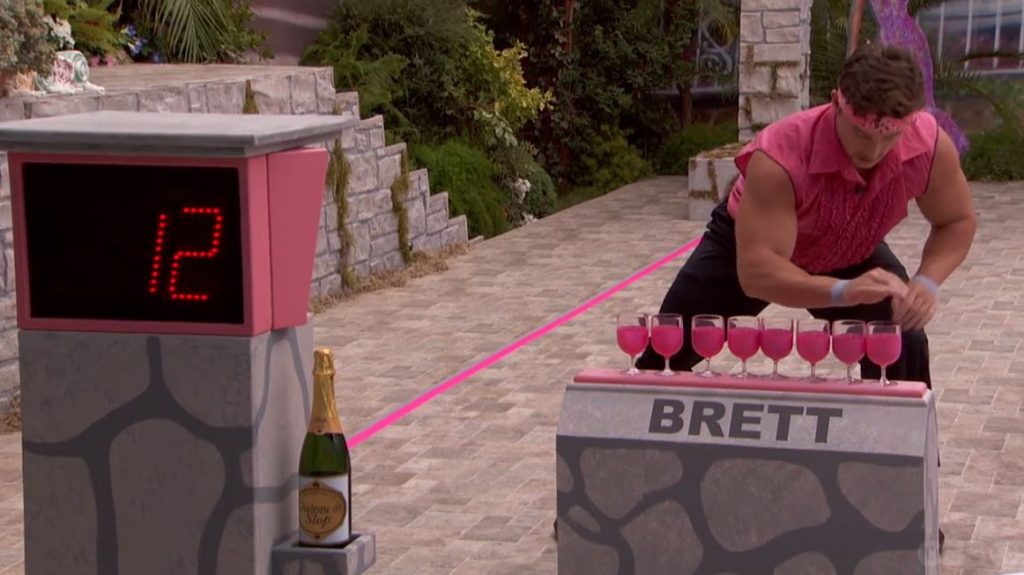 Anyway, the goal of the comp was to be the first to stack your collection of champagne glasses.   But you first had to spin 15 times which kicked off a 30-second timer.  You then run dizzily over to stack glasses, while keeping an eye on the timer, as you had to run back and reset the timer and spin again.   Brett took a commanding lead but then his glasses fell.  Winston never seemed to be in contention, but their pal Rachel was doing realllly good… 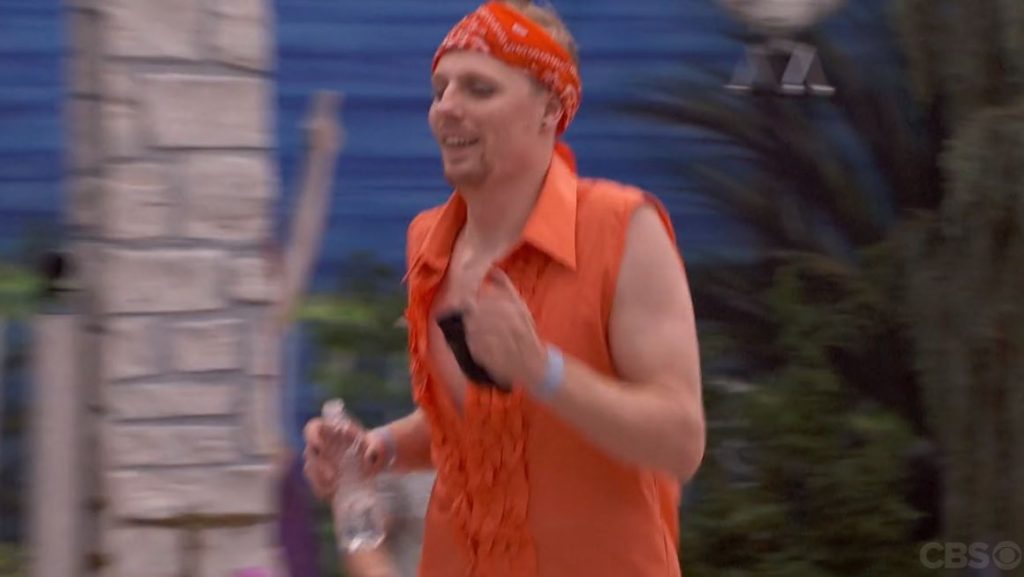 but it was Scottie who sealed the deal on having one hell of a week as he won the Veto!

The Bros’ goose is pretty cooked, right?   Well, I’ll give it to Winston and Brett for not giving up, as they concoct a plan to team up with Scottie in a secret Final 3 and the first course of action would be to take Brett down and put Kaitlyn up as a replacement.   Their rationale really isn’t all that off either, as Kaitlyn did have key roles in removing both Steve (Scottie’s BFF in the game) and then backdoored another of Scottie’s friends, Swaggy. 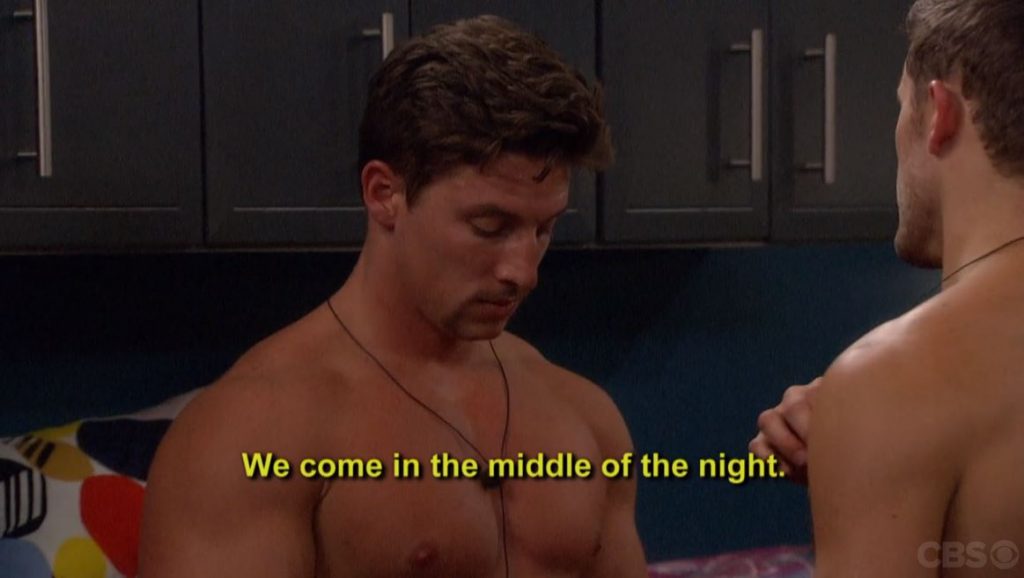 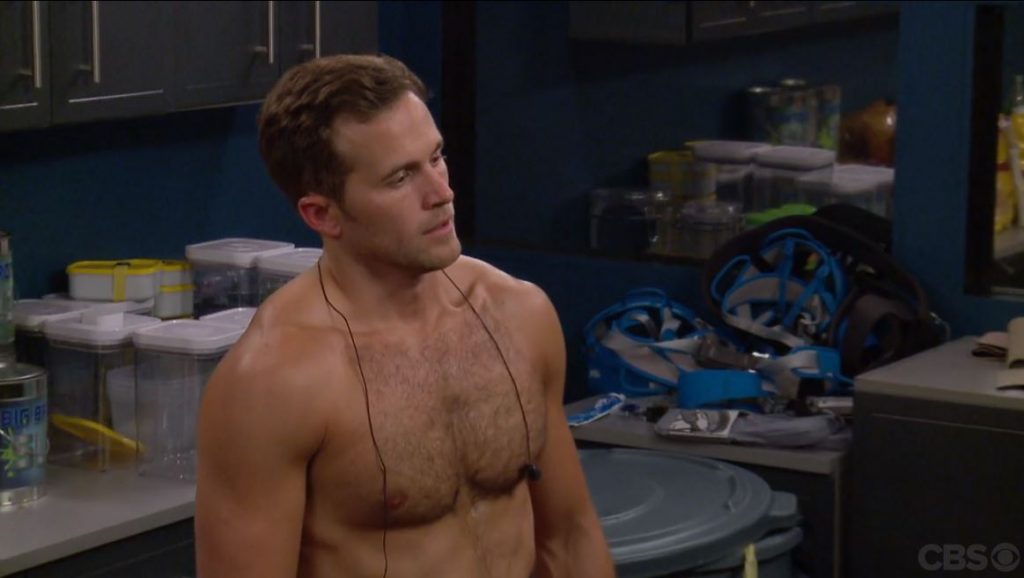 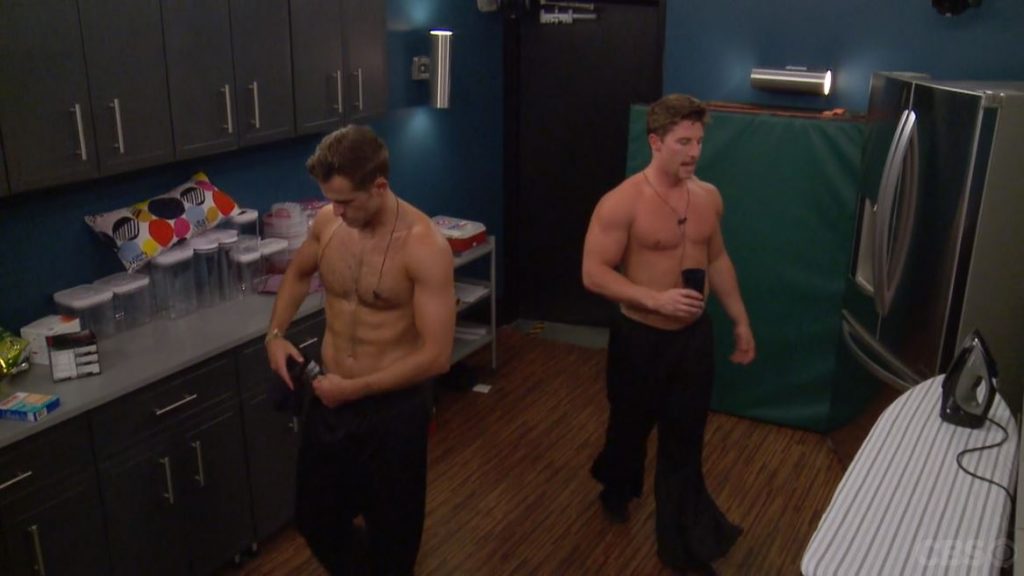 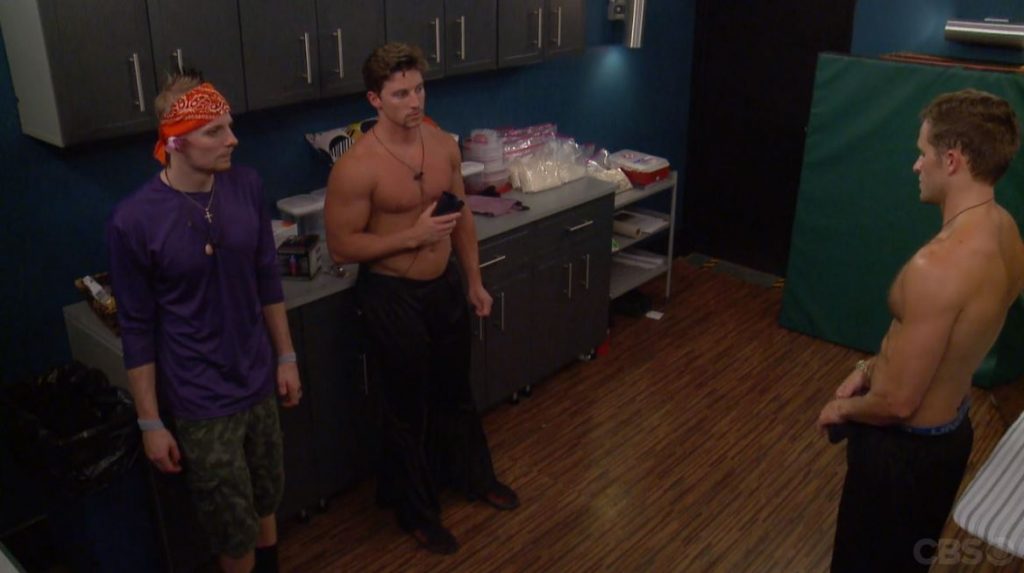 And so they literally crafted their “come in the middle of the night” plan (heh heh) moments before Scottie walks in to the storage room…and they have him to themselves….and Winston decides to just let the moment pass with awkward silence.  Brett hilariously notes that that would have been the best time to propose their plan after Scottie leaves.  MORONS.  Hot Morons, but still.

Kaitlyn Gets a Hit

It’s kind of funny that this all happened and I don’t doubt everyone is paranoid, but the fact that Kaitlyn had “a hit” in the form of a dream in which Brett & Winston threw her under the bus, asks Scottie about it, then gets confirmation!?  I loved it. 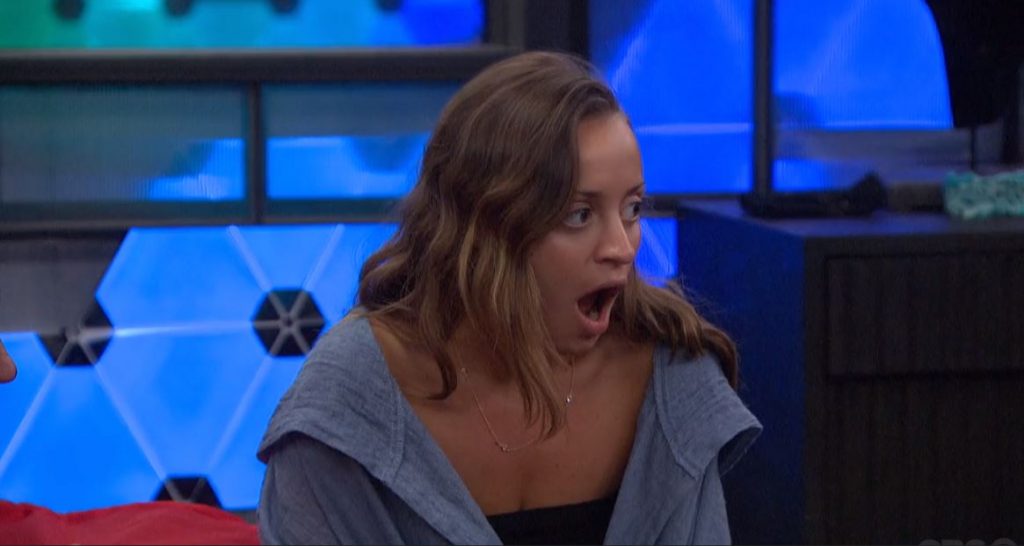 Kaitlyn is seriously a star of this season.  While not always the driver of a plan, she has certainly executed actions each week that impacted who went home and that’s not nothing.  So let’s bow down to her metaphysical talents (coughBBproducerscough) and enjoy the drama that unfolds. 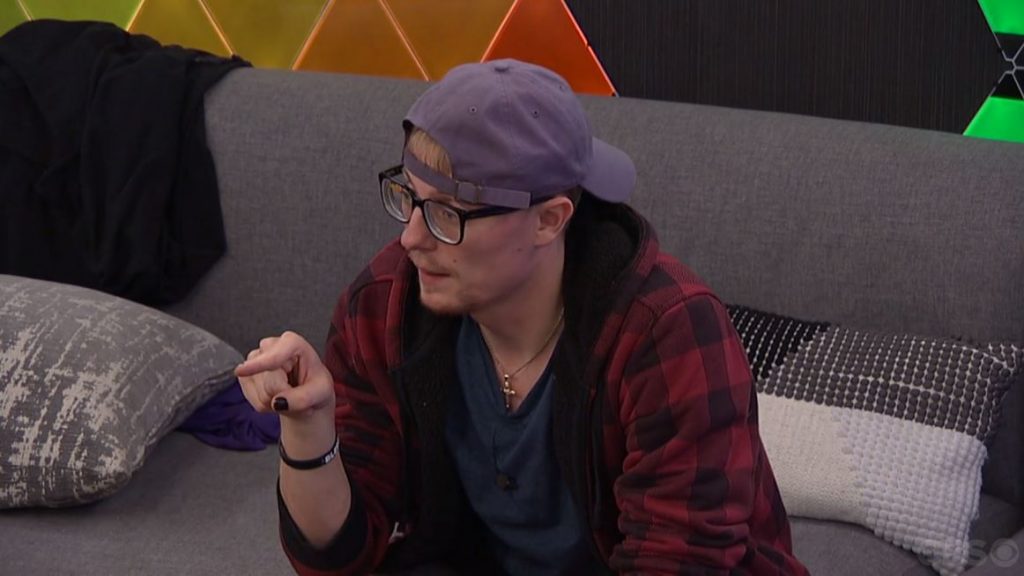 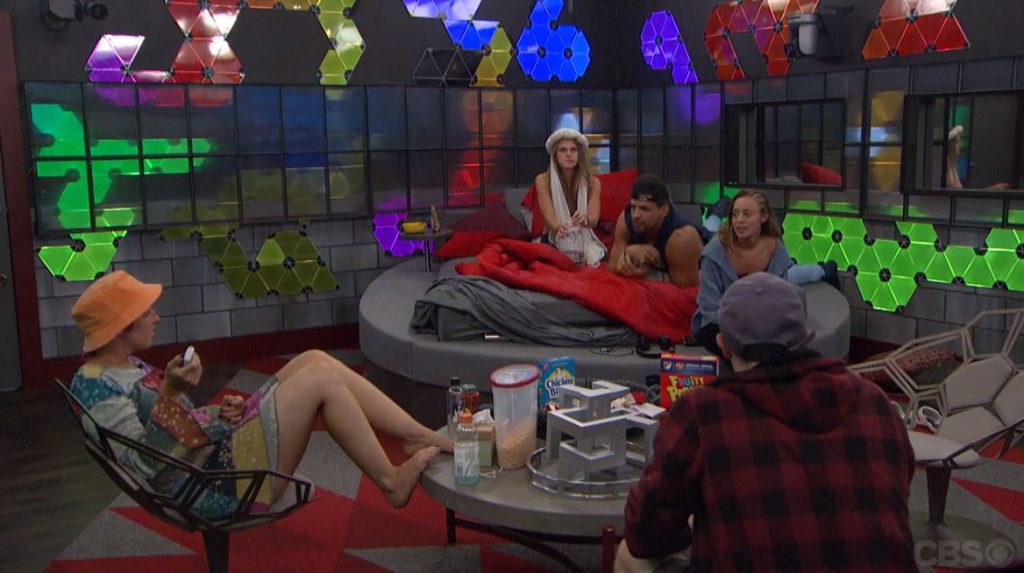 Scottie quickly rats the Bros out and lets them know the entire scheme.  Kaitlyn admits that she’s upset and then she barrels out of the HoH room to confront the Bros.   Neither Winston nor Brett really act all that guilty and mostly fess up to it, but Kaitlyn can’t help herself to going down there and demanding answers. 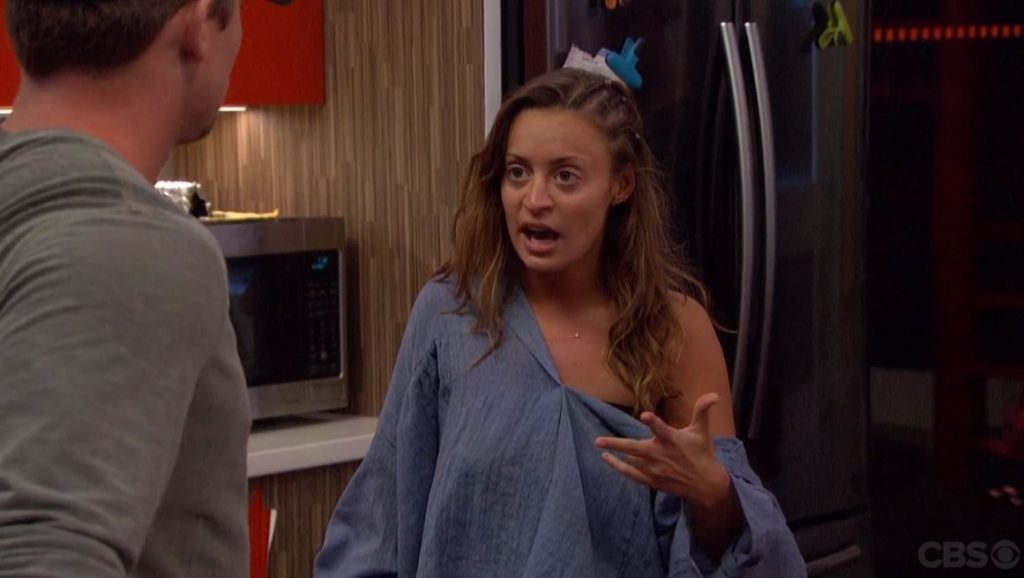 Go get yourself some answers, Kaitlyn.  We’re all enjoying the ride.

Bros on the Block 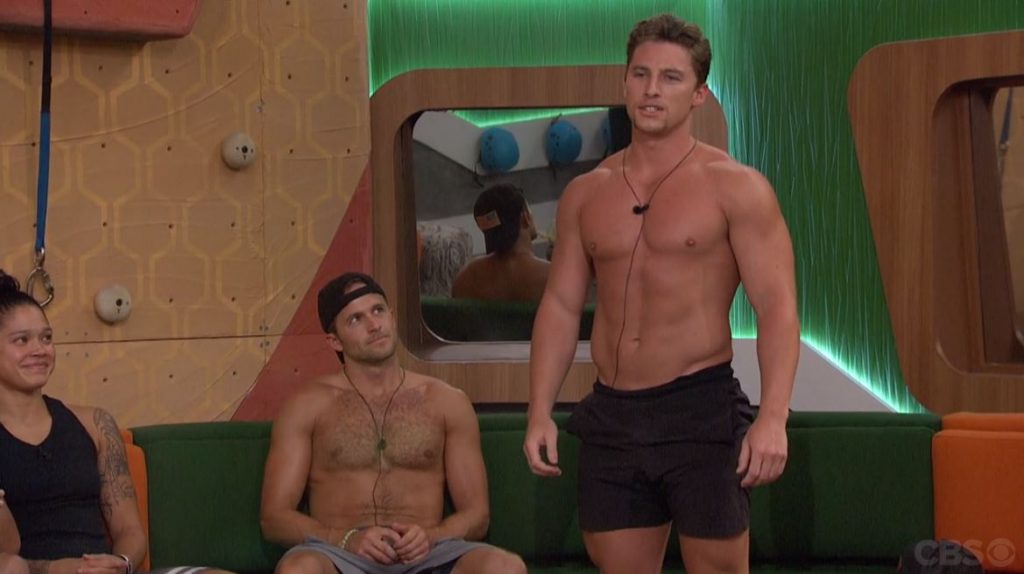 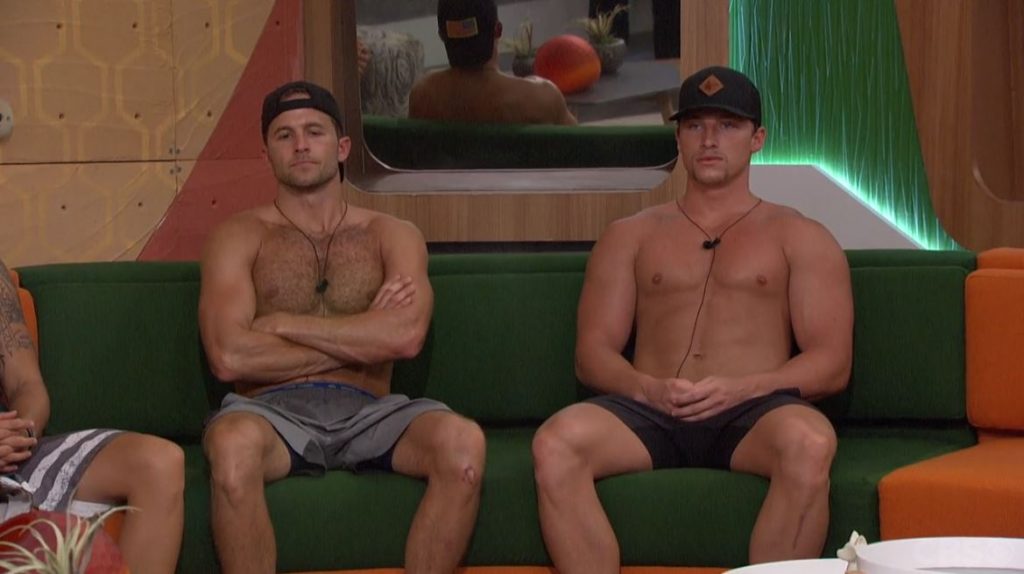 Hot damn, these guys are smokin.   Thank you, CBS.  Anyway, their plan goes south as Scottie decides not to use the Veto.   He then starts a bit of a lecture and indicates that they now answer to him…. 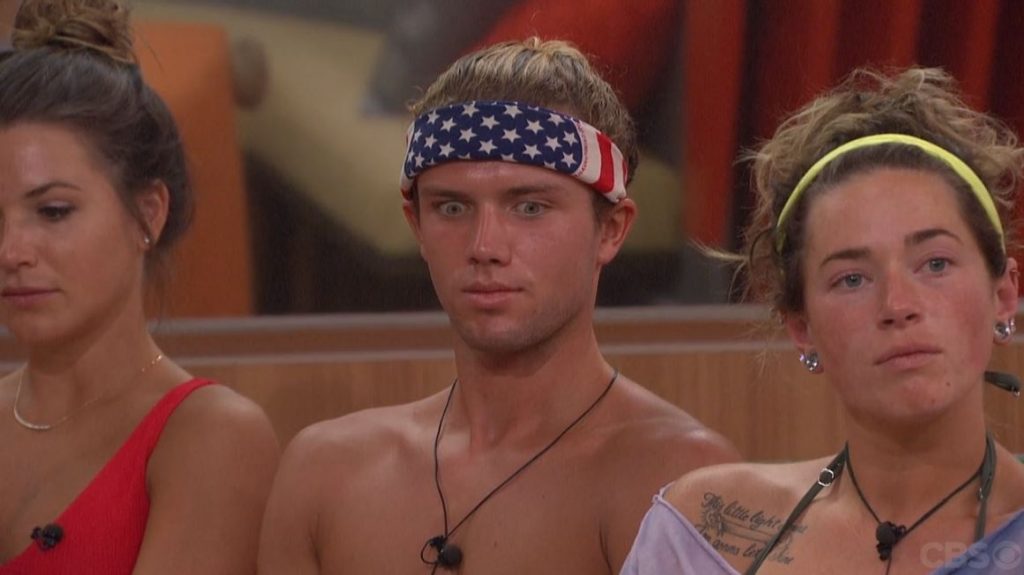 …to which Tyler and I shared the same expression as it’s like, uh, dude, might want to tone it down just a skootch as this is still JUST Week 3 here.

Anyway, the only thing I think that has the slightest chance of impacting the game here is Sam’s “Bonus Life” power.  She very well could decide that helping either of these guys is better than it possibly saving someone random (and someone she doesn’t like, but who would that be?) next week when she has no power to guide it.   Personally I would keep it and have it as a backup in case I’m the target…although I think she’s done a great job falling under the radar after her Week 1 experiences. 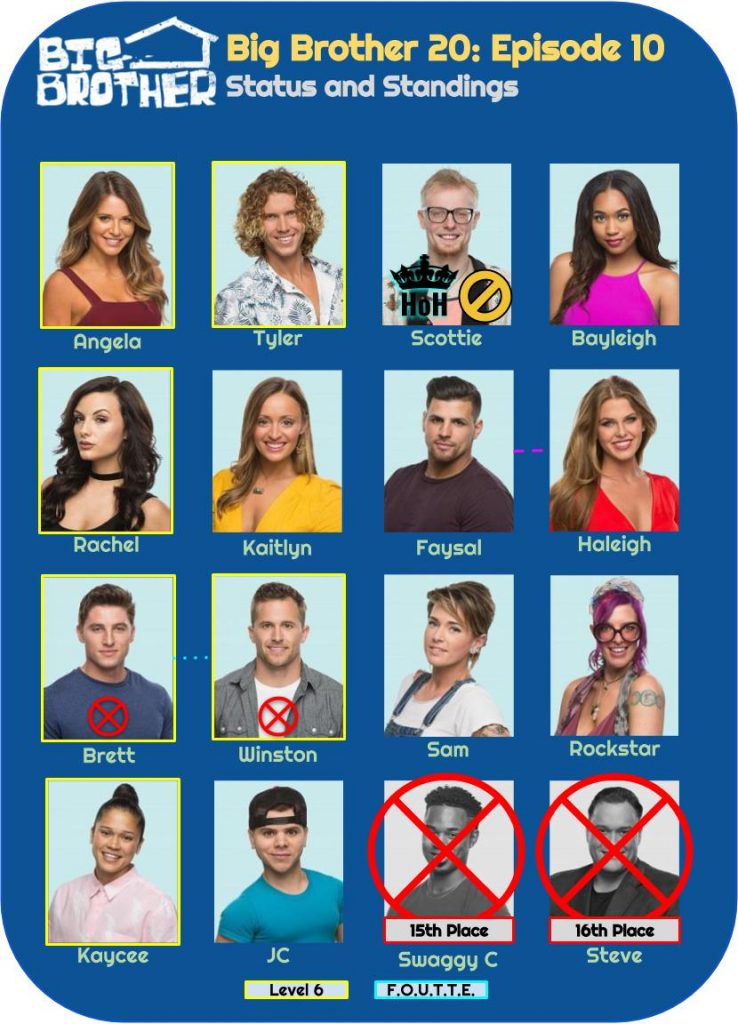 Tonight’s the elimination episode and I’m definitely looking forward to seeing how this plays out.   I hope there’s some hot, spontaneous Brett-Winston making out because come on, there’s more than just bro-ness.  🙂