Since the next episode is literally airing in less than 2 hours, and I’ve been regretfully unable to get to this post (Friday at work, it was actually busy!; then on Saturday, it was mainly because Larry & I hung out one last day before he headed back to NYC for a month), I figure let’s talk about the important stuff.  Namely, Shane is effin’ hot AND he is one lucky son of a beyotch because seriously, he HAD to win the HoH competition, and sho’ nuff, that hot mofo won it!  This picture here isn’t from the episode, but it certainly indicates how hot he is.  🙂

Live elimination episodes are tough to get involved in too much, as not all that much happens except for of course the HoH competition, and even sometimes that doesn’t actually happen during the episode when it is an endurance challenge.  From what I remember (this right here is a sure sign I should take brief notes while watching episodes!), before the live vote occurred, we got to see that Danielle and Dan made up and he apologized.  We also saw the first hints of scheming from Danielle as she started blabbing to everyone who would listen what Ian told her about one night in the Have-Not room Shane and JoJo were flirting.  Let’s be real here:  who can be faulted for flirting with him?  NO ONE, that’s who.  Alright, I digress. Danielle’s stories got everyone (mostly the females though, let’s be honest) all pissy at JoJo especially since they thought Danielle and Shane were supposed to be a showmance.  Ugh.  He doesn’t belong to YOU either, whore!  Mine Mine MINE!

So the Vote occurs, everyone besides Shane votes JoJo out, and that’s that.  She apparently was her own worst enemy as even Britney had to snark about the fact that none of the advice she gave to her was heeded.  It was all, “yeah yeah, I know” repeatedly.  Britney, I’m just gonna say, you are an awful coach. AWFUL.  If this was the episode where Dr. Will commented on each coach (and I now realize it was), he was dead on in that she’s doing a terrible job.  Agreed.  He also has very little love for Janelle and Dan but praised Boogie, which isn’t surprising coming from the other half of the Chilltown alliance.  I liked that he pointed out that Boogie and Ian are the EXACT same person.  Hilarious.  But back to the point:  Britney, while being a fabulous contestant on her own, is not the right person to give others advice.   Well, unless she picked other girls like her.  But she chose people who could never do the Britney strategy. 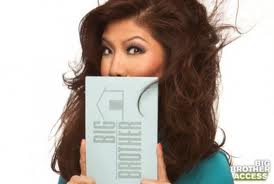 Anyway, at the Head of Household competition, each competing houseguest was given one hockey shot to hit a ball into a Plinko-style slotted wall – each slot had a different point value and only one had a 20-point reward.  One by one they made their shot, eventually to a point where Shane HAD to make the shot of his life.  He hail mary’d a precise shot off the side wall and the ball went dramatically into the 20-point slot.  Unreal.  It was awesome.  The last contestant, Danielle, did a good shot too (14 points, which was actually the second highest shot of the night), but it didn’t matter. Britney and Shane were saved for one more week.  Yay hotness!!!!!

The final surprise of the night was revealed by Julie Chen to America when she let us know we could vote on whether or not Big Brother would offer the coaches the ability to go back into the game.  Ugh.  You know that it will be allowed, but I’m not much of a fan of it.  But I think it has to happen if they plan to fill up enough weeks of airtime to last until September when Survivor and Amazing Race resume.  We won’t know if the offer is made until tonight (maybe?) and I am curious as to how the offer will be made.  Do they all have to go in or can they go in on an individual basis?