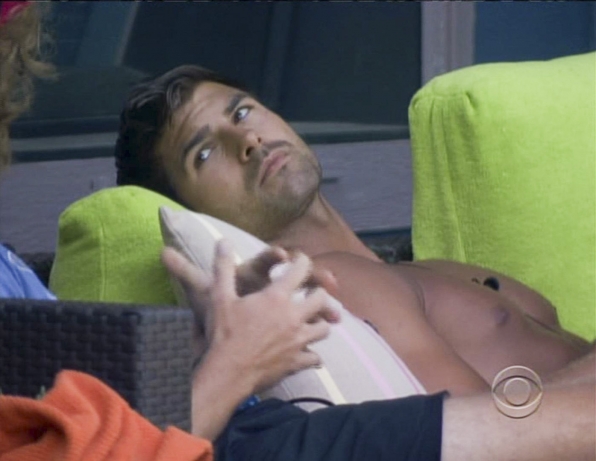 Well, hey now, the hotness has more to him than just hotness! Â Frankly, I was okay if Shane was just a pretty face that managed to last a few weeks and somehow always forgot where his shirt was. Â I mean, look at that pic! Â Yowza. Â  That is a good looking man. Â And the body is stupid hot. Â What the hell was I talking about? Â Oh yeah, that Shane is MORE than just a hot piece. Â In this episode, Shane actuallyÂ strategized. Â I mean, he had to if he had any kind of interest in staying in the game. Â But as could also be seen in this episode, not everyone is mentally tough enough to actually figure that out and do something. Â coughDaniellecough…..

This was a turbo-charged episode compared to a normal Wednesday episode, as we’d normally already have our nominees from the Sunday episode and Wednesday would focus on the Power of Veto. Â Not much filler in this episode, in other words. Â In the beginning, we did get a chance to see that Ashley is what I’d kindly call a dim bulb. Â Oy. Â You know, I hope beyond hope that it’s all an act. Â What a way to fly under the radar than to come across as extremely unthreatening. Â I think Janelle was like that in her first season until the battle lines were drawn between her group and the Fiendship – once that happened, Janelle strapped her armor on and waged holy hell on the Fiendship. Â Ashley even indicated that there was more to her when she justified her vote to evict Kara: only one under-the-radar blonde in this house! Â  So I bet in the end, we’ll see the master strategist come out. Â Wait for it!!!! (or not….) 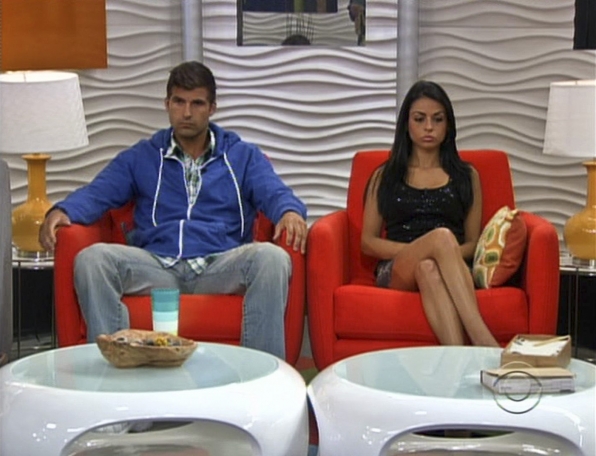 We also got the chance to see Shane and JoJo dwell on the fact that they were inevitable nominees due to their alliance with nutjob Willie. Â Even when they spoke with Frank about it, he was upfront about the fact that Shane & JoJo had made their beds and it had been with Willie. Â Both hoped that it showed that they were extremely loyal – I can actually see that as a good point for them. Â But obviously, this is still the time when if there are easy, non-controversial targets to nominate and evict, that’s what you go for. Â So the completely unsurprising result? Â Frank nominates Shane and JoJo for eviction. Â Neither are surprised, but both notice that only a few people gave post-nomination consolation hugs. Â They’re well aware that they are on the outs. Â Britney advises that the two of them just lay low. Â I don’t know if that’s the best strategy but at this point, Britney is just hoping to do damage control and somehow last this week without losing all her players. Â It does seem a little perverse that the Big Brother game continues on even though a houseguest was eliminated already. Â Talk about Double Whammy! Â  Â I’m not sure if Britney is totally fucked still, but you can tell she’s beat down. Â Even her sarcasm is laced with apathy. Â That’s just tragic.

Because this is a super-fast episode, we now move to the Veto Competition. Â Nobody wants either of the contestants to actually win the Power of Veto, Danielle most of all. Â She is well aware that if the Power of Veto is used, she’s the logical next nominee as Team Dan is higher on the target list than anyone on Boogie’s or Janelle’s team. Â  Of course the other houseguests, especially Frank and Boogie, are thinking ahead on what to do if Shane pulls out a win. Â  It’s never a foregone conclusion that the hot hunk will win a competition – but when it comes to strength-based or athletic-type comps, it’s definitely likely. Â He’d also win in a hotness contest, but they haven’t done one of those yet. Â WTF, Big Brother? Â Get on that. Â Boogie tosses out an idea that pretty much sacrifices a pawn, and as Jenn points out, “Being the Pawn” usually equals “Going Home That Week, Oops!” 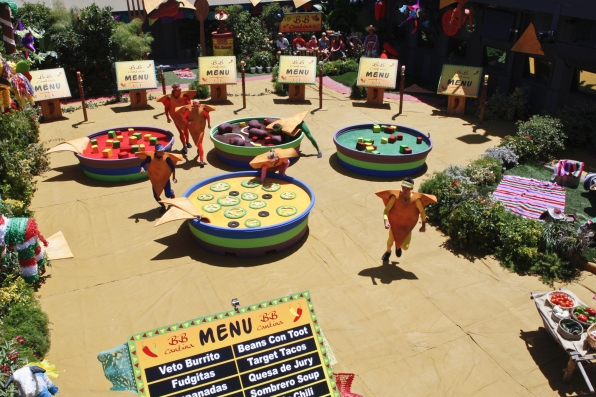 The Veto Competition turns out to be a combination of memory/intelligence and aerobic activity, as the contestants, dressed as a tortilla chip, had to plunge into different oversize bowls of dip and find a menu item plaque, memorize where it was placed on the BB Menu, then run back and place it on their own individual menu. Â It’s a fairly good challenge and doesn’t really let anybody’s obvious strengths (Shane’s hotness, Ian’s intelligence, Ashley’s ….?) guarantee an easy win. Â Ian tells us he has a photographic memory and that leads me to think he’ll be hell to beat if he gets to the final challenges as a lot of those focus on remembering timelines of the show or specific details about random things. Â Anyway, this does look like he has an advantage, but Shane pegs Ian as a threat and just manages to ring in his answers ahead of Ian. Â The contest winner will be the one who gets the most right in the least amount of time, so Shane had to take a chance and make sure he came in first. Â After Ashley finally finally finishes, the results are announced and after a FOX-style commercial break before revealing Shane beat Ian, we find out indeed that Shane got all the answers right. Â Cue the house scrambling!

Shane certainly impresses as he decides to not be just Britney’s pawn but actually play his own game. Â Good for him! Â He makes plans with Frank & Boogie, who seem to actually trust him, and it involves a loose final-2 alliance between Shane & Frank. Â The condition is not telling Britney or JoJo. Â He manages not to immediately tell them, contrary to what I was sure would happen. Â Intriguing. 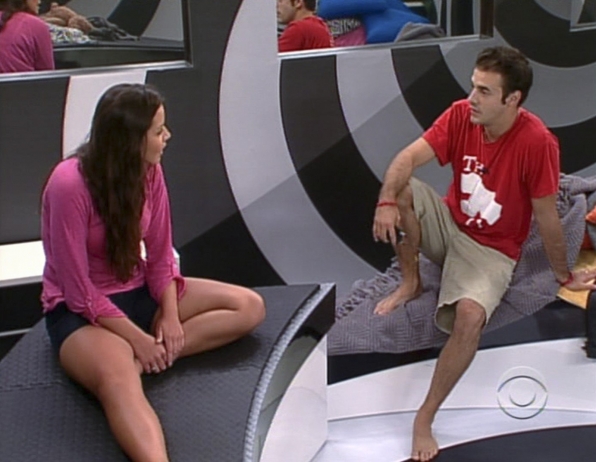 But some scrambling was more just sad panda-ing. Â Danielle is positive she’s going up now and begins MopeFest 2012. Â Dan decides to use his “brilliant” “coaching” skills and basically tosses her into the deep end of the pool. Â It’s a technique that might work for a stronger contestant, but seriously, Danielle is not that contestant. Â In this picture, you can see Danielle’s “shocked” face when Dan tells her he isn’t going to help her. Â The face doesn’t go away for a while and this may as well be a video of the same event. Â She ends up moping to Shane too, who feels kinda bad about it as he had pledged to kinda protect her last week. Â So Shane comes up with an idea: Â suggest to Frank that instead of nominating the obvious choice (Danielle), put up one of Janelle’s players, namely the biggest threat outside of Frank and Shane: Â Wil. Â Frankly, I think the idea is a good one. Â I’m not positive that Wil is disliked enough to be a bigger target than JoJo, especially since JoJo can’t vote. Â Where are the votes against Wil? Â Both Larry & I noticed that Wil doesn’t really seem to talk to anyone (at least on the show) so perhaps there’s something to be said in making him the target. Â Frank is receptive of the idea and promises to think about it, but that’s pretty much codespeak for “not gonna happen.” 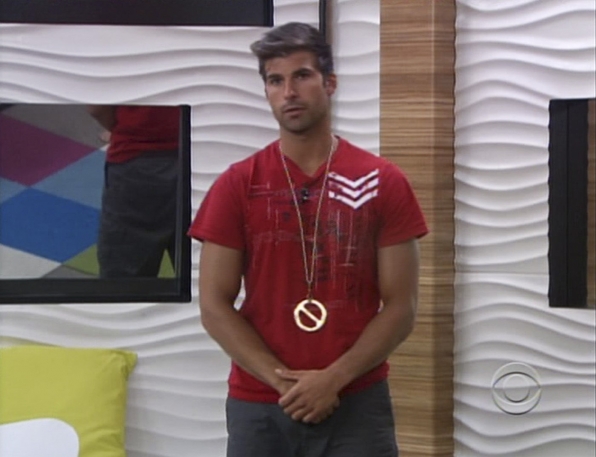 At the Veto Ceremony, Shane obviously decides to take himself off the block, leaving the seat next to JoJo vacant. Â Frank has to name a replacement nominee, and after the requisite CBS dramatic buildup and music, he reveals that Danielle is his replacement nominee. Â Not a surprise. Â We even get to hear his reason in the Diary Room and it’s a sound one: Â Turning on Janelle’s team at this point is the wrong move as it’s just too early. Â Agreed. Â This tactic would have been great a week or two later. Â At this point, it’s merely a shit-stirring move. Â It would make sense to knock Janelle’s team down a member though, so that only Boogie’s team has three left. Â But it looks like the strategy is to take Britney’s team down to 1 first. Â Britney may get to live though if Frank and Shane’s alliance is a solid, real one. Â As solid as his six-pack abs, I hope. Â The man is justÂ fine. Â So that’s this latest turbo-charged episode of Big Brother. Â Dan promises that he has a final trick up his sleeve and it will involve throwing Britney and JoJo under the bus. Â Honestly, can’t see what he could possibly do that would put them in a worse position. Â They’re already on the outs and expecting to go out, hence they’ll be fighting to stay as well and aren’t going to be blindsided by anything. Â But I have been known to be wrong before. Â Once.