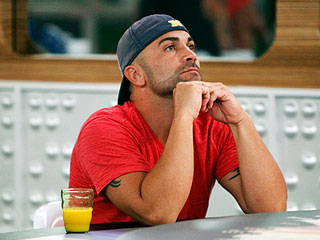 Can CBS at this point stop inflicting the Hantz family on us?  At this point, I truly believe that Russell Hantz of Survivor is the closest to sane that this family can give us.   The second Hantz we met, Brandon, who was on a later season of Survivor, proved to be pretty mentally unstable (foreshadowing) himself, first seeing all the single women on the island as evil temptresses and finally having a holy breakdown.  When his father visited him (at this time, I’m not positive if Willie was/is his dad or not….) on the family visit episode, his father was hoping Brandon would get his shit together, but even the father also seemed to be a bit off.  And finally, we are treated to Willie Hantz, another of Russell’s brothers.  You know, he started off as somewhat agreeable and seemed to realize that he needed to keep his Hantz status secret.  Yet, just like a Hantz, he was ready to cause chaos in his quest for $500K.  Obviously, this episode proved that his quest would be very short-lived.

Head of Household:  Frank
Nominated for Eviction: No one yet – this episode’s drama pushed that to Wednesday’s episode
Coaches’ Challenge Winner:  Janelle
Immunity Given To:  Ashley
This Week’s Have-Nots:  Willie, Shane, JoJo, & Ian
Removed from the game:  Willie

Where do we begin?  The easy, light stuff?  Sure.

Ian is earning his adorable geek cred back in a sweet way, having asked Ashley out on a “slop date,” since they’re both, at the time, Have-Nots.  Being a good sport about it, and also having revealed to us that geeky cute guys with glasses are her type, she accepts Ian’s invitation. Boogie is pretty sure that Ian has no real chance with her, but let’s face it, it’s a nice, harmless gesture and goes a long way to hopefully erase Ian’s erratic, nude, self-kicking behavior from everyone’s minds.   It’s an awkward yet charming date and both seem to have fun.  But a bow tie, Ian?  Really?  I’m impressed you at least got a button-down shirt and tucked it in to some khakis, but a bow tie?  Anyway… 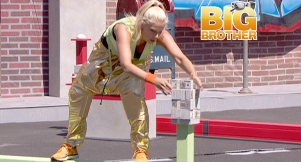 The Coaches’ Challenge had some interesting stakes.  We learned last week that the winner had the option to trade a player but if they chose not to, they could instead reward immunity.  At this point after the ridiculous first week, Janelle, Boogie, and Dan are basically on the same page and have no intention of trading.  They are praying that Britney doesn’t win as NO ONE wants the toxic Willie on their team.  Boogie amusingly tries to persuade/intimidate Britney into believing that if she wins, it would be to her detriment to trade Willie away as now everyone would just go after Shane instead.  Britney is not falling for Boogie’s shit.  I love me some Britney, and find it awesome that she isn’t stupid in the slightest especially with regards to Boogie’s silly political maneuvers.  I just wish she hadn’t fucked shit up so badly with her paranoia.  It’s clear that Janelle has dissolved their alliance as Janelle refuses to ally with someone who can’t control their team.  Honestly, I’m not sure anyone really could have controlled Willie, but I have a feeling there is some sexism involved and a “girl” telling Willie what to do was never going to fly.

At the challenge (which involved MC Hammer Pants, crossing a beam, shuffling blocks of cash from one end to the other one at a time), the only way this challenge would be interesting is if Britney wins.  Alas, after taking a strong early lead, Britney clumsily knocks two blocks of money from her starting source.  That was one way to get disqualified, the other being if you fell off the beam.  So Britney is out first (sigh) and Dan not being a contender as he is choosing to throw the challenge by not appearing strong.  So it comes down to Boogie and Janelle and it is indeed quite close.  Boogie finishes first, but in an act of amazing douchiness, steps off the beam before hitting the buzzer as he was compelled to brag to the audience “that’s how it’s done!”  Janelle wins.  He’s such an ass.  Janelle wins, gives immunity to Ashley, and then basically throws Britney’s team under the bus and gives them all Have-Not status along with Ian, who volunteers.  That kid is nuts.  So yeah, it’s clear that Britney’s on the outs.  Doesn’t mean she’s completely fucked, but still, this is a sign that unless Britney, Shane and JoJo put some master plan into motion, their time is limited in the Big Brother house.

No more nice and easy (thanks, Tina Turner).  Britney is well-aware that she is in a pile of shit now.  Her sane players, Shane and JoJo, are scrambling and panicked as they realize full well that being associated with Willie by virtue of being on the same team is destroying their game.  Britney tries to inject some clarity and reason into Willie’s brain in a one-on-one session, but he isn’t buying what Britney’s selling.  He is convinced that this is an individual game and that he doesn’t need any- or everybody else.  Wow.  How do you come into a game like this and think like that?  Up until the final four (or hell, even final three), Big Brother is definitely NOT an individual game.  It’s just like Survivor in that regards – although Survivor is a bit more explicit pre-merge about having teams.  If you don’t have an alliance, you’ll never make it far except by dumb luck.  Under-the-radar is definitely a style of gameplay YET Willie Hantz blew that possibility up a LONG time ago.  What’s funny is it really hasn’t been a long time…yet it feels like an eternity as SO MUCH SHIT HAS HAPPENED!!!!

So Willie refuses Britney’s advice and she immediately advises Shane & JoJo to distance themselves from him.  After they get put up as Have-Nots, Willie tries to rally them together but Britney quashes that immediately.  I think this is the beginning of the end for him as he must realize at this point that absolutely no one is going to work with him.  JoJo justifiably feels bad for doing this but she is also not stupid – until he’s gone, he’s toxic.  Willie then decides it’s time to clear the air and storms into the HoH room to first try to make sure everyone up there knows not to lump anyone else into his actions but then he declares that he’s going to get evicted before the next vote.  Huh?  Yeah, well, that statement doesn’t really make sense but it does after the fact as now Willie has flipped that switch.  He decides to pick a fight. Joe casually mentions something (I didn’t hear what he said the first time and didn’t feel like rewatching) that sets Willie off and he goes full-on FratBro on Joe.  Joe has got his arms up and is ready to defend himself as Willie gets ALL up in his face.  Finally Willie head butts him (kinda?) but it’s enough for the producers to finally chime in and direct Willie to the back bedroom away from everyone else.  He is then called into the Diary Room (DR) in which the inevitable happens:  he exits via the Chima door.  The executive producer, Alison Grodner, tells everyone that Willie is gone from the game but that the game is still on as usual.  Hence, nominations will occur this week still.

YOWZA.  What an episode.  I don’t know if Shane and JoJo can avoid getting nominated – it seems pretty clear that Britney’s team is an easy one to target since Janelle, Boogie and Dan have a loose alliance at the moment.  Britney!  Why did you have to get so damn paranoid?