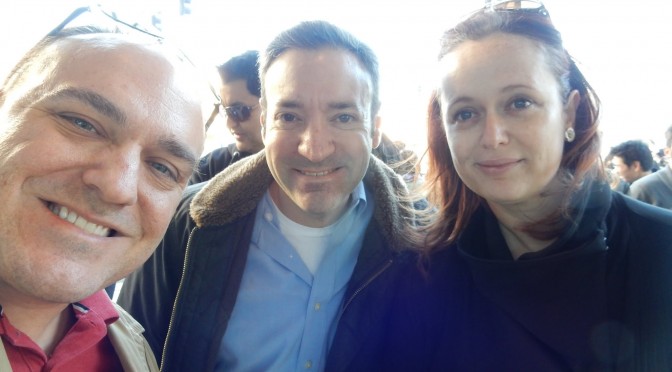 It really was a fun few days.  Michancy came down and had her first visit with us in a long time (perhaps Thanksgiving 2014?), and it went well.  We actually did some work to make our office able to handle the queen-size air mattress.  To do that, we got rid of the clunky TV that Larry’s been carrying around with him since the 80s (I kid, only slightly) and got a 40″ inch flat panel from Sony.  Super light weight and pretty inexpensive, and we were able to mount it on a wall.  Then I got some furniture sliders and put those underneath the legs of our credenzas, allowing us to slide them out of the way.  Voila!

She made it down a little early to avoid bad traffic (which unfortunately would be inescapable on her return journey) and so it was just her and I for a little, and we discovered we had no vegan snack food.  Off to Ralph’s we went, and by the time we got back, Larry was home too.  Wine drinking ensued, and then we went and got sushi at nearby Akuma.  After that, I made Michancy watch Spy on Blu-Ray and I was pleased and surprised to discover it had an Unrated version that has significant additions and changes to scenes, making it even more funny.  I’m actually kind of shocked the scenes reviewing the assassin’s camera were even longer….so to speak.

Larry not only made his excellent mac and cheese to take with us to Mom’s, he also made a vegan version of shepherd’s pie.  I did not partake in that dish.  🙂

We spent the afternoon and evening at my mom’s house, along with Stacie & Trent.  It was a lot of fun and we ended up opening our gifts there too.  I had picked up the LEGO Big Bang Theory set for my mom;  I picked up the BB-8 robot for Larry.  He got me a Fitbit which I’ve finally set up last night and I’m well on my way to tracking my fitness all day and night!  My mom got us some great Star Wars mugs too.  More drinking occurred, along with watching the Adele special on NBC, and of course plenty of dancing. 🙂

Larry got to put BB-8 through its paces and we watched the best Christmas movie ever, Die Hard.

Day After Christmas Fun: The Broad

Well, we first made our way to the Granville Cafe to get some breakfast and bloody marys, but after that, we thought about heading down to DTLA and visiting a new museum.  The Broad has just recently opened and it’s still fairly popular – especially since it’s free.  Also, there’s an Infinite Stars exhibit that people are all crazy for and which we ended up not getting to see as you have to get to the museum early and sign up for an appointed block of time.  Kinda like “Breathing Light” at the LACMA when it first opened.  Larry & I will have to try again as it does look like a cool thing – BUT, after waiting about an hour to get in, I think all three of us were happy to have visited the Broad as it’s a great collection focused on modern art.  Lots of fun stuff to see, like Koons sculptures (some of which were previously at the BCAM wing of the LACMA – it’s also a Broad-owned wing, hence the “B” in the name), Warhol art, and some awesome Lichtenstein pieces.  Modern art can be sometimes ridiculous, but it can also end up being quite interesting.

Up close to the Veil while waiting in line

Heading up the entry escalator

After seeing the museum, we walked along Grand Blvd towards Grand Park, passing by the Walt Disney Music Hall and the area around the Ahmanson.  Lots of great cultural venues all co-located in this area!  Grand Park is a place Larry and I had visited but it’s still situated in a very interesting location with the famous LA City Hall positioned at one end.  We ended up having a much-needed Starbucks break before continuing our walk back south.

The view while walking down Grand Park

The Grand Park fountains near the DWP

Makes me think of 500 Days of Summer

The end of our adventure took us by the closed-down Angels Flight funicular, through the exciting Grand Central Market, over and through the Pershing Square area and past the upcoming site of our nuptials, the Oviatt Penthouse.  The final destination was over at Bottega Louie, which has become a very happy place to grab dinner in DTLA.  It’s just so good and such a great vibe.

The entrance – alas, you have to walk

Oviatt from a distance

Zoomed in to the US Bank Tower

Then it was time to go home!  After some time relaxing back at the apartment, we ended up going back out to enjoy some of our local nightlife at a restaurant/bar called Jax.  It’s known around here as a place where live jazz is played every night – and of course Larry & I hadn’t gone yet since living here.  But hey, we made it under a year!  It was a lot of fun to go though and while I didn’t know what to expect (I DID expect it to look kind of like where Effie White sings in the Dreamgirls movie when she gets her first break on her comeback – I was wrong), it was pretty cool to get a seat right by the jazz group and just drink and enjoy the night.

On Sunday, Michancy was headed home.  We also had an appointment to meet with a wedding photographer which seemed to be a success way out in Simi Valley.  We had left at the same time as Michancy, and so when we got back and started cleaning up the room, we discovered Michancy had left her laptop bag.  Not good for her to not have that especially when it’s her work bag.  D’oh.  So she unfortunately had to turn around after being past Yermo on the drive to Vegas – we helped make it not too painful by driving out to Fontana to kind of meet halfway.  But yeah, she ended up having a horrific drive back as there was unreal traffic going to Vegas yesterday.  I’m still not sure why, as you’d think the main traffic pattern would be coming to LA, but I do indeed remember one holiday driving back to Vegas and it took me close to 7 hours because of snow on Halloran mountain.  UGH.

Anyway, it was a good visit and now I’m off for a week.  Thanks, PwC!  I better enjoy it as we all hit the ground running upon coming back as it’s busy season across the board.  FUN.