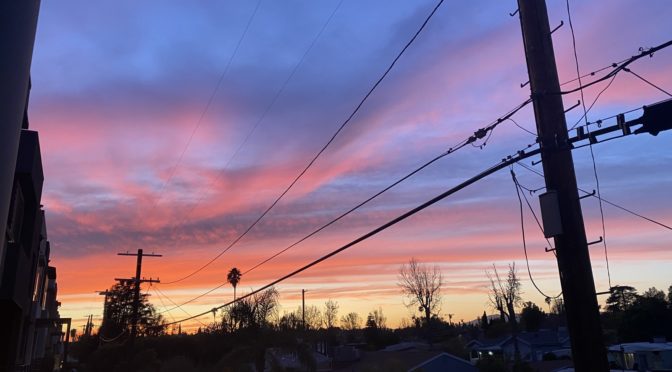 Yesterday marked 3 months since Larry died.  Yesterday was not a good day accordingly.  I spent most of the non-work day in tears.  Part of that was also watching the series fucking finale of Schitt’s Creek and it’s just not fair that such a wonderful show is ending.  It of course ended wonderfully with David and Patrick’s wedding and the Rose family achieving their happy endings.   It broke me up to see the beginning of a wonderful marriage with all the sentiments that I remember feeling.   But my marriage ended in death as Larry fought and lost his battle with cancer.  “Till death do you part” is a bitch of a thing, especially when it applies to you.   I think about death frequently, whether it’s the hopes that Larry is around in some form or fashion or if coronavirus, if and when I get it, will be how I go.   I think about all the things that probably need to be taken care of and who would actually handle those things, and then I remember that oh yeah, you’d be dead so it wouldn’t matter.  It’s morbid, I know.  But being alone with your thoughts while grieving is a fucking nightmare.  Highly not recommended.

It’s like week 4 of the coronavirus physical distancing / safer at home order we all live in within Los Angeles county.   It’s unbelievable that we’re in this situation.  Our national leadership is abdicating all responsibility for the matter, and today tweeted the hope that we’ll all forget about what we’re going through.   Yeah, not gonna forget that you were aware of the threat since January, took no action, delayed action because you considered it a hoax and a hurdle to reelection, and still just make shit up that you think sounds about right.   There honestly was an opportunity to solidify your re-election:  be a leader and lead the nation through this, and be aggressive and own the situation and help.  But nope, that’s not who he is.  Has never been.   And people who voted for him and will again can go fuck themselves.

So yeah, week 4.  I’m losing my fucking mind, honestly.  It sucks.  I have been doing yoga consistently – in fact, today I count 45 days straight of me doing yoga to start the day off.  That was even before the quarantine had started.  It has helped to calm me down, and frankly it has been great with regards to my overall lean muscle mass.  I definitely feel stronger.  It’s nice.  I play video games a lot – lately it’s been The Division 2, Anno 2250, and some Rise of Nations too, which is such a comforting game to play.  I have a lot on the backburner, especially a lot of my VR games and new ones I’ve bought.  I’ll get to them.  TV too:  Twin Peaks rewatch is in full effect (in fact, today is the 30th anniversary of the premiere of the pilot episode!  There was a rewatch led by Kyle Maclachlan and Madchen Amick which was fun.)  Westworld season 3 is still amazing.  Schitt’s Creek just ended but this past season was phenomenal.  Survivor is kicking all kinds of ass.  So I do have my distractions.  But having no human contact beyond the occasional delivery person (which is a risk in itself!) is no way to be.  I never considered myself that much of an extrovert, but yeah, I am.

Here we are though – I miss Larry unbelievably and talk to him still, as who else do I have to talk to.   I have plenty of texts and calls with my friends and some family.   Mom is safe, but she’s so unconcerned with me or anything besides her own immediate needs so that’s just what it is.  I just have to continue on – do I know what is in store for myself or the world?  No clue.   Honestly I don’t think this distancing will end anytime soon, not until a vaccine is created.   It sucks, but this coronavirus is a bitch.   So that’s my rambling.   I had hoped to have more cogent thoughts or something approaching organization, but nah, that didn’t happen.   Here are some pictures from the last few weeks to tide you over, most from me but also some from my friends too.

Looking at the bushes before I trimmed them

Michancy went for a hike

Got some ice cream

Steaming veggies in the instant pot

Had a really nice sunset

View from the office

My meal after grilling