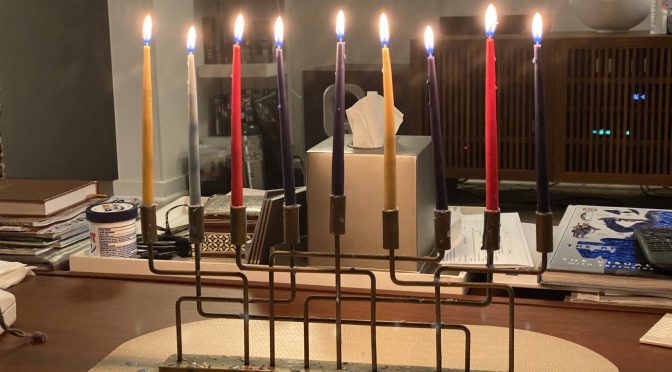 A bit quieter of a day thus far, although it was a pleasant morning.   After some grouchiness from Larry because he didn’t want to eat and take pills while in the bed, and wanted to be moved to the couch, he was alert and wanted to watch Star Wars again.   He also ate his French toast that Fran wonderfully made, and it was a good experience.  Only made it to about the 1.5 hour mark in the movie though and I could tell he just needed more rest, so he’s sleeping now.  He’s wheezing a bit more than normal, and that I guess is to be expected and why we have the oxygen tanks.  We’re also expecting a visit from a rabbi today, which may be good.

The rabbi came by and it was a good visit – the rabbi was orthodox, but he was very very personable and relatable.  He did some prayers with Larry and Larry was able to repeat and follow along with them.  Nicki was also there for this at this time and it was frankly a nice experience.  The Rabbi wanted us to definitely do the last night of Hanukkah – which we did.  We did finish up the rest of the Star Wars then, and let Larry then sleep.

Nicki hung out with me and watched TV (we watched the first 2 hours of the Witcher) and it was clear by the evening that Larry’s lucidity was wearing away.  Who he was in the morning was a far cry from who he was by night.   We all watched the movie 1917 (fantastic, btw) and Larry was in and out.  I tried to talk to Larry a bit while we were all starting to get to sleep in hopes maybe there was some lucidity – as I wanted to know what he preferred for his final wishes.  He just didn’t know.  Fran has told me that his grandfather has already purchased plots for him back in New Jersey, and I am good with that being the path forward.  I know I’ll be back there to visit him in person, but I also know that I don’t need a gravesite to memorialize him.   Mila and I were discussing it today (Dec 30) and I think something like a small garden of sorts on the roof deck would be wonderful.  I just can’t fucking believe this.  Nicki was flying back to Florida tomorrow, so this was effectively her saying goodbye to Larry.  She had a moment crying with me before she left, which was the first time she’s really broken down.  I obviously know what she’s feeling.  When I left myself truly feel these moments, I can’t help but cry.

The last pictures of us with Larry are below, with him somewhat lucid.   It is devastating to know that, writing this from late January.  It’s so ungodly fair this happened.