I’m as shocked to write this as you are reading this, I’m SURE, but we watched a whole bunch of new shows this week and I gotta say, I kinda liked every one of them. Â Plus, an old favorite returned tonight and after a few years of terrible, terrible seasons, it came back as if they’d never happened. Â What a surprise!

New Shows We Tried and Liked: 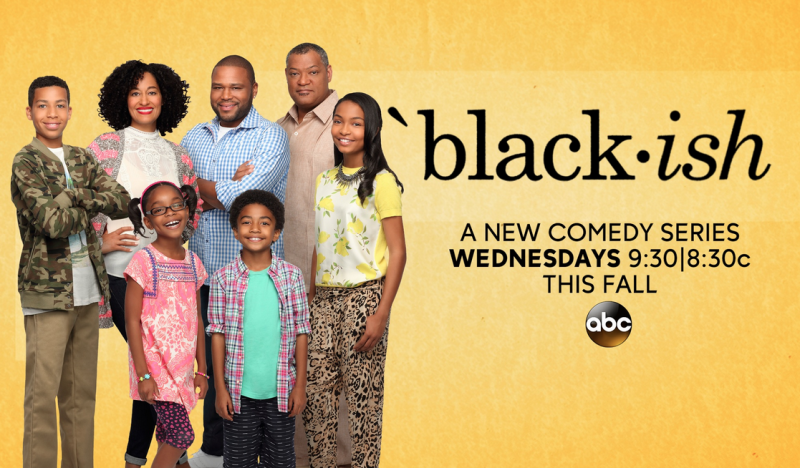 black-ish was a show that I kept hearing about from people I knew and what I’d read online and that they all loved it. Â Finally tried it this week, and had to agree that it’s a great show. Â I know we’ve missed the first half of this season and will have to catch up, but so far, so good. 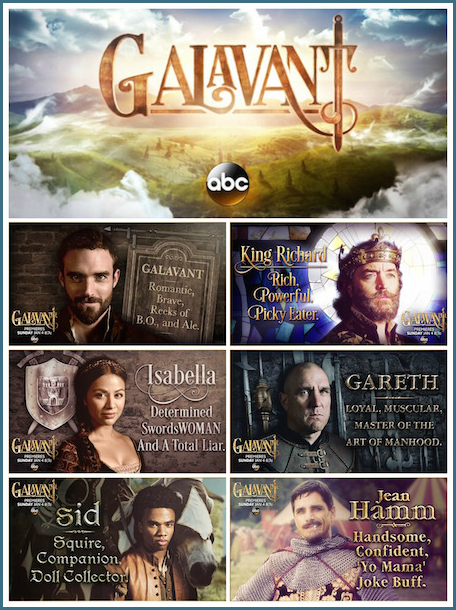 Looked totally cheesy and kind of like another dip to the well ofÂ Once Upon a Time, a show we aren’t watching. Â Then GalvantÂ turns out to beÂ a musical, and suddenly the gay blood starts to get intrigued. Â We find out that Alan Menken is the music man behind it. Â Holy hell, really? Â Then it’s getting great reviews, so it’s like, okay, let’s watch the encore presentation this week….and wow, it’s awesome. Â It’s just a half hour each episode but it’s hilarious, the songs are great and very catchy, the cast is excellent, and the lead actor who plays Galavant? Â Fucking hotness…. 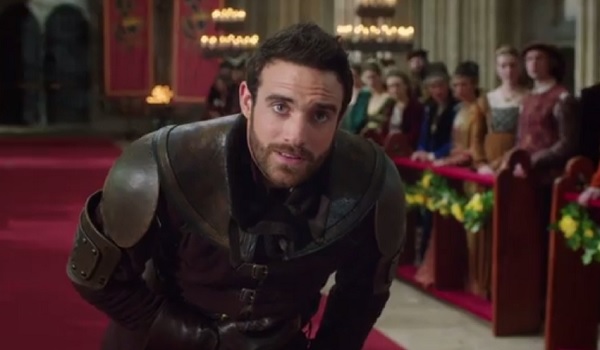 So another great show is added to the lineup. Â It’s a mini-series event, which honestly is not a bad thing anymore. Â It seems networks are discovering that trying to stretch out a good thing to something much longer than the premise supports has diminishing returns, especially in this age of Netflix.

I already posted earlier this week about the wonderfulÂ Agent Carter but it bears repeating in this post, as this week really was a great first week for 2015 Television (while being an utterly awful and terrible terrible week in the actual world, so let’s focus on fantasy for now).

Other Standouts worth a mention: Â

The Goldbergs: Â Not a new show for us, but one we’ve drifted off and on with. Â Ridiculously funny this week. Â Such a great cast.

Cougar Town: Â Another not-new show but it’s been one we’ve been watching since it came on and it’s one that always entertains. Â The final season, which is kind of sad, but probably for the best.

And now, for the returning show that had its best showing in YEARS:

Yeah, I know – I’m just as shocked as anyone. Â I felt compelled to catch Glee’s return this year as it’s another show that is having its final season. Â I’ve absolutely hated 98% of the episodes and storylines from the last two seasons, whether it’s the way they showed “NYC Life” and Rachel’s ridiculously convenient success at everything she did, getting into the arts school, then headlining Broadway for a day before deciding to take a TV show gig. Â That’s not even including all the ridiculous shit back at McKinley with the fairly meh new kids. Â And the less I say about Blaine and Kurt’s awful relationship and engagement, the better. Â I can’t say there wasn’t some good found throughout (“Let’s Have a Kiki” anyone?), but man, those were some brutal seasons.

So whaddya know? Â The first 10 minutes of this new and final season pretty much wipe the slate clean. Â Rachel’s career implodes spectacularly and she returns to Lima. Â Kurt and Blaine are broken up. Â All the new kids are gone. Â Rachel decides to start up the McKinley glee club again as a fuck-you to Sue Sylvester (Jane Lynch is and always will be awesome, even in those awful seasons) while also knowing that Sue’s anti-arts stance is worth taking out. Â Mr. Schue heads up Vocal Adrenaline and Blaine coaches the Warblers, so we’re back in a mode of Season 2/3 goodness. Â Not Season 1 levels, but that would just be ridiculous.

And let me just say, they chose some songs for this 2-hour premiere that were fantastic. Â Not one mash-up to be found! Â Not that all mash-ups are bad (far from it), but I think every fucking musical number last season was one. Â I’m so glad the NYC stuff is over – bringing the scale back down was a wise move. Â I’m very excited if this quality can be maintained. Â If so, I may surprise myself and pick up Season 6 on Blu-ray when it comes out as I do love it when Glee is good and don’t mind having some of those performances at hand. 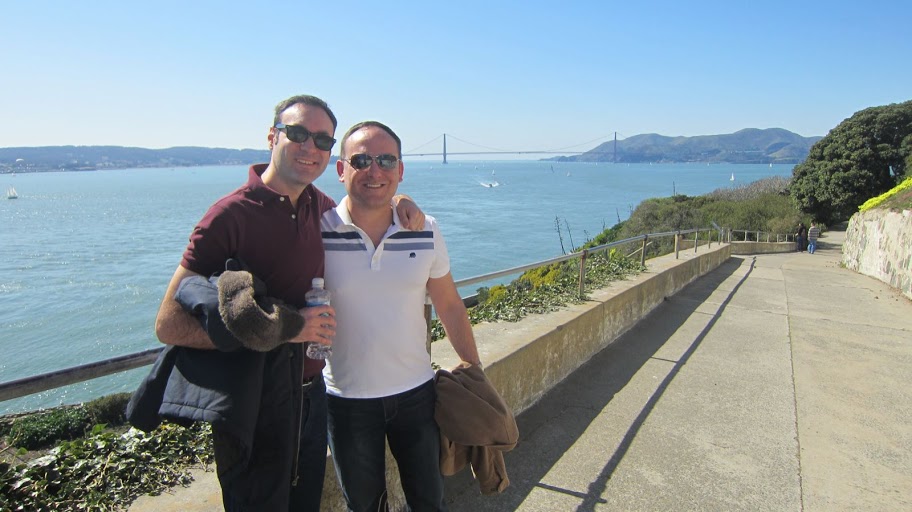 It’s been an eventful month and a half, that’s for sure.  As I wrote last time, I ended up aggravating my sciatica in a major way, in a way that involved much more pain than what I was dealing with after the European cruise.  Excruciating pain.  Awful awful pain.  I was basically laid up for a week as I couldn’t stand, sit, or lay down.  If you had offered me a chance to cut off my leg, I would have taken it.  Surprisingly though, during that weekend after the first week of me agonizing trying to find a way to exist without pain, I did find that happy position.  And even more joyous, the pain started ebbing away.  I didn’t dare to hope that it would go away entirely, but I hoped it would recede to a point I could at least drive, go to work, stand, etc.  I worked from home that next week as I was able to sit up, and during that week, it was miraculous how the pain ended up going away.  The next week, I drove back to work.  And during that week, the pain went away entirely.  It was mystifying and a relief.

I’ve since seen a spinal doctor who was only too happy to operate or provide injections, but I deferred and asked for physical therapy at this point.  So I’ve been doing that twice a week the past three weeks.  The exercises have been focused mainly on my core area with a focus on trying to wake up muscles there as well as un-stiffen my back.  It’s working.  So here’s to hoping that I can get back to a decent exercise program as I’m definitely “bulking” up.

There are lots of pictures ahead, and I also wanted to post random videos of stuff that I’ve been obsessed with.  Before the pictures, here’s a performance from this past week’s episode of Glee, which had a disco/Saturday Night Fever theme.  The show has been pretty awful lately, but this was a fun episode mainly due to the musical numbers.  My absolute favorite from the episode was a performance of KC & The Sunshine Band’s “Boogie Shoes”:

Alright, so this weekend, Larry & I went to LACMA to catch the awesome exhibit called Metropolis II.  It’s this huge structure basically filled with tons of slot cars and a crazy amount of tracks winding their way around skyscraper structures.  It’s fascinating and indulges every little kid’s love of race tracks.  It runs during the weekend only, with it running for one hour on, one hour off until the museum closes.  This video catches the very beginning of a rotation:

It’s mesmerizing, and you can hear my various utterances as I fall under its spell!  I also took some pictures when we were there –

The exhibit ends at the end of the month so we cut it pretty close.

If you want to see what else we’ve been up to, well, my picasaweb link has a few more albums in it showing pics from the San Francisco trip (thankfully my sciatica relapse didn’t happen until the day we were planning to come back!), Michancy’s visit last weekend, and other randomness.  Hopefully lots of nice weather in the future and opportunities for pictures.

Here’s a sampling of pics:

Driving Up the California Coast

Biking Across the Golden Gate Bridge

Off to Chinatown & Lombard Street!

Admittedly, there isn’t many pics here – that would be because I was suffering agonizing sciatic pains.  Yay.  But I had to take some pics of the Transamerica building as we were driving right for it!

That’s enough for now – I’m just glad to finally have gotten back on board with this.  More to come, I’m sure. 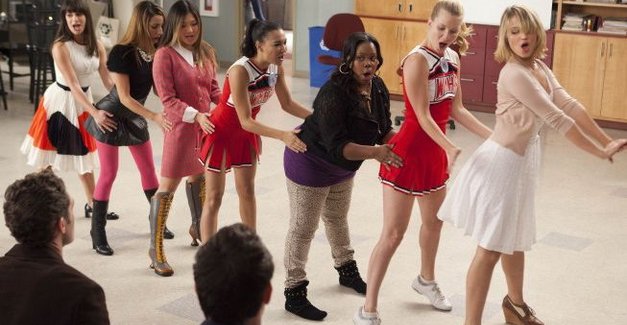 Yeah…so….GLEE. Â What the hell has happened to this show? Â It is making little to no sense anymore. Â This article from the Onion’s AV Club section pretty much describes exactly what is wrong, even just based on last night’s episode. Â The plotlines are random, quick, and ambivalent, and sometimes icky (Puck & Shelby & Quinn, namely). Â The songs are meh. Â The good scenes are mentioned as having happened offscreen (Santana coming out to her parents, Burt somehow winning the election) and frankly this show is becoming more of a chore to me than entertaining. Â But alas, I will stick it out to see if it can find itself. Â The beginning of Season 3 was such a remarkable turnaround from the rut of Season 2, but then, well, after the Asian F episode, it just became bleh. Â Alright, that’s all for now.

So I don’t really know much more than the fact that Mickity passed her bar exam – and to that, I say “Hells Motherfucking YEAH!”  There’s really no other way to put it.  I am doubtful Hallmark makes a card to state this as it needed to be stated.  So good on ya, Mickity, and go rock the legal world.  You’ve earned it and deserve to.

I’ve had two somewhat strong drinks during dinner (homemade Rum and Diet Coke, which is always much stronger when made by me than if purchased at a bar) so forgive me if I ramble.

Glee was awesome last night.  Love it love it!  Could Puck be any more goddamn hotter?  GEEZ.  There’s an awesome “slash” video that somewhat put up on Youtube with longing gazes between him and Kurt, the show’s resident gay character…thus far.  It’s here below:

Also found out this week that in an episode of Glee in 2010, it’ll be an all-Madonna song episode.  Holy crap, this show couldn’t get much more gay if it wanted.  And I love it for that.

I saw Glenn Close at 30 Rock yesterday.  So random and so cool to run into celebrities at work.  I don’t have any idea why she was there – but I’m going to keep an eye out for her on maybe SNL, although I think this week is a repeat.  Boo.

Okay, enough from me…for now.  Yay that it’s Friday tomorrow.  Also stoked that tonight has tons of TV – probably won’t catch up until this weekend.

Take care, and watch the hotness that is Puck.  And on this week’s episode, I’ve never heard or seen a hotter rendition of Sweet Caroline….ever.  Yowza!