I have been going through a steady and slow process of converting my old site’s HTML pages into WordPress entries because it makes things much easier to search and the ability to display photos with the Shashin plugin is fantastically more user-friendly and the photos can be seen in their full glory. Â You have no idea how much work I’d put in to minimize the size of all my photos to be “web-friendly” as back in the day, I was working under disk space usage thresholds and considerations for those on dial-up connections. Â I’ve been blogging for a while. Â 🙂 Â Anyway, I’m at the point in my life around late 2007 when I’d just recently arrived to New York/New Jersey. Â Stumbled upon my first pic I took in Central Park and I just fucking love it. Â Makes me miss the place immensely: 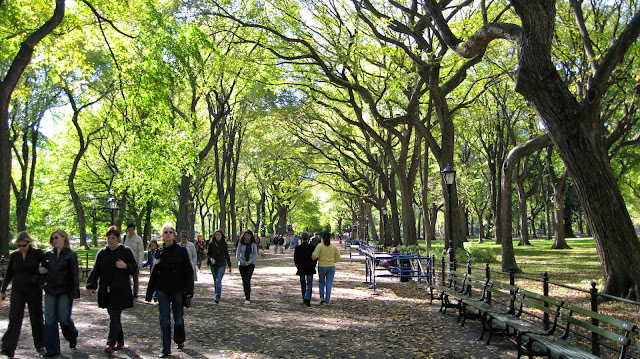 This week was nuts. Very glad it’s concluded. While the first week that my boss was away was pretty much non-eventful, this last week? Not so much. I can say it was one of those ‘I Really Learned a Lot’ weeks and even better, we all managed to keep things going well.

And that’s all I need to say about that.

As for this weekend, I met up with Larry after work on Friday afternoon and he was going to go for a run around Central Park because he needed to get some running in as he was signed up to do the NYC Half-Marathon today. He invited me to join him on his run, and I agreed. I have posted a map of Central Park here so you can kind of see what I was up against.

Larry has told me that basically the loop below, that has multiple colors tracing it in the picture, is about 6 miles exactly (I know, the words ‘about’ and ‘exactly’ cancel each other out – it’s my blog so back off). I am comfortable with about 3 miles for a run, and that is on a treadmill. Lately I just haven’t had the chance, desire, or opportunity to really run a long distance out without treadmill assistance. So I guaranteed to Larry I could make it (probably) at least 3 miles.  But after that, it’s anybody’s guess.  So in the map, we started where the blue line starts on the right-hand side of the map, somewhere near the Boat House.  And then proceeded to run counter-clockwise  on that long blue path….and that’s a long fucking park.  I managed to do pretty good all things considered.  There’s this one part that Larry termed the Fuck You Hill (I think so…), and it’s a well-earned name.  It’s a seemingly nonstop run up this seemingly nonstop rising hill….and I actually made it to the top without stopping, but I REALLY wanted to.  It was about the 4 mile mark though where I really started just getting tired and sore, and as you can see on the map (which was found to be at the 4.4 mile mark), you’ll see the blue line stop.  Alas, that is where I stopped my run. I just couldn’t go any more.  I could tell Larry wanted to keep going though (he actually runs around the Park TWICE in a normal run – uh…psycho), so I said I’d meet him back at where we started, so I walked the dotted orange line back and he continued running, I assume, on the green path below.

Needless to say, that was a fun, but tiring experience.

On Saturday, we went to see the X-Files movie….kinda disappointing, but it was great just to see Mulder and Scully together again and to get little hints in the movie that gave the long-term addicts something to be satiated with in terms of what has happened to them in the meantime since the end of the show.  The theater wasn’t al that great, and the movie actually stopped in the middle of the show as the reel must have fallen off the projector or something.  Who knows?  but nearby that area where we saw the movie (down on 61st and 1st Ave), there’s that awesome furniture/home decor store called Conran’s which has AWESOME stuff.  Very cool, urban styles and if I ever have a place of my own again, I’d definitely go back there to pick some stuff up.  It would help to have won the lottery, but that’s a side matter.

And now I’m back home….and jsut concluded watching all of 30 Rock’s Season 1 episodes as I picked up the DVDs last week.  I can not believe I’ve been missing out on this show since it has been on.  It is hilarious.  And very surreal as I see many of the places that I actually work and walk around in.  Very cool.  But beyond the recognition factor, the show is just absolutely hilarious.  Now I have to catch up on Season 2 via the Hulu site so I’m ready for the upcoming season.  Yay – a funny (and intentionally so) NBC show!!!!!

Okay, it’s time for me to get my pizza.

One of my coworkers described me with those words. I think it’s hilarious, because it’s actually hard to say what that is really meaning.

So once again I took it kind of easy on the updating – that’s becoming a regular occurence, isn’t it? Well, let’s just say work and social life have been actually taking up a lot of time. Plus, by the time I get home during the week (usually right around 8pm), I’m not really in the mood to update. But, I know, I know, you all want to see pics of the tree – I guess the NBC Special wasn’t enough for you? 🙂 I didn’t watch that damn thing either. In fact, I realized that I had no desire to fight the ridiculous amounts of people who had clustered around Rockefeller Center that night after the lighting ceremony, so I left for home before the lighting ceremony. I figured, I’ll get to see the tree nearly every day for a month and can take my time taking pictures of it. It was crazy that night though – the roads were clogged with FTPs and I ended up not taking the ferry home. Instead, I tagged along with Arielle who lives in Hoboken. She takes the PATH train home (the same train of infamy in which I sat next to PukesInPlasticPurseGirl one night a month or so ago) so I did that. A MUCH better experience this time, but mostly because Arielle and I crack each other up the whole time.

What else has been going on? Work has been fairly busy lately and it’s been nice. I really think I’m beginning to feel like a contributing member of the group, although there’s still a long ways to go. But I seem to have carved out a good niche of responsibility and work closely with a really smart guy, Jim, who I also get along with great. So that’s that!

This past Tuesday I went to a screening of the upcoming movie, Atonement. I went along with some other coworkers here at NBC who are also gay and I just gotta say, it was a freakin’ blast. The movie, not so much. It’s beautifully filmed and there are definitely intriguing parts to it, but I just wasn’t blown away by it. On the walk back to Midtown though, I got to see even more of the city, and stumbled upon Park and Lexington Avenues, one time even looking up and realizing I was walking along the Citigroup building, which I’ve been trying to see closer. I don’t know, it was just a nice night and it wasn’t ridiculously cold yet so it was a good night for strolling along Manhattan. Especially at that time of night (between 9 and 10 pm) – the city is almost ‘calm’ if you will, and there’s not too many people milling about.

This morning, woke up and looked out the window: New York’s first true snow happened today! I don’t know how long it’ll stick around, probably not that much, but it was cool to see snow again. Just glad I don’t really have to drive in it! Can’t escape the cold aspect though, and it’s in the 20s today. But my Colorado friends can probably trump that.

Alright, enough rambling. My quality posts are never the ones where I’m trying to sum up a whole week or so of events. I usually try to cover everything so quickly that I end up glossing over the real fun or good stuff. Robbie told me he got a PS3 and I am ridiculously jealous of him now. And Greg (a guy I’m dating) has an iPhone and I want one of those ridiculously bad too. It’s probably a bad thing that I make a decent amount of money. I ended up buying a new leather briefcase/bag that should come in tomorrow – can’t wait to get it and replace my Gap Messenger bag with somethign that looks a bit more classy and nice. I’ll take pics of course.

With no more further ado, I present to you: Pictures from New York and of course, the Rockefeller Center Christmas Tree!!! 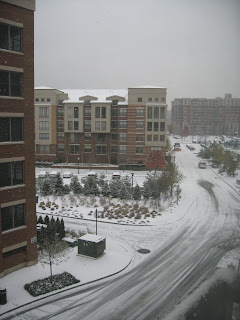 I made it to Central Park today – and man, there really is nothing like Sunday in Central Park, especially when the day is beautiful.

So I went to Central Park today because I decided to take rollerblading lessons, and when I found out I could do it in Central Park (sts), I was totally there. And because this was the first day of sunshine in a couple days (while SoCal has been burning up, we’ve been drenched with rain – talk about bad timing on that) it was even more amazing. Had a good time though and I definitely feel a lot better on rollerblades now.

It’s been an odd week at work for me – had a few days there where I got a little bummed because I wasn’t sure of my role but I had a great talk with my officemate, and she is a project manager expert and she gave me some good advice on how to tackle things at work. Made a huge difference for my mindset and made the rest of the week a lot better.

And things are going well so far in the personals thing. Might be meeting up with one or two this week – I know, I’m a raging whore. I’m just stoked that someone may actually be interested in me right back. Go figure.

I’m a little distracted right now for some reason – hence no REALLY long paragraphs for you today. Maybe I’ll be more focused tomorrow.