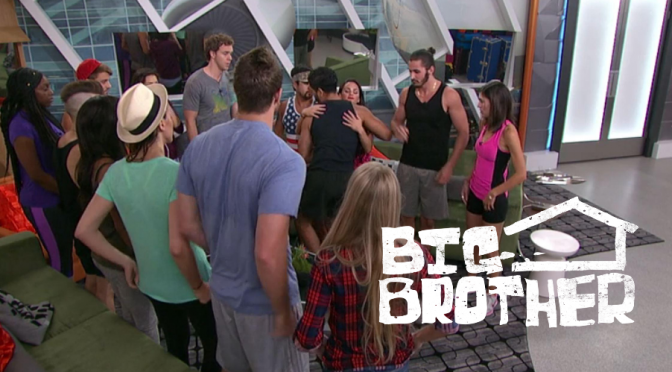 <– Previously, Paul Gets a Taste of Roadkill

It’s been a hectic few days at work and I got to put in more hours per day than is expected in service of the client, so here we are with me catching up on my BB recaps and doing a twofer.  To be honest, the episodes were enjoyable enough, but the outcome wasn’t a surprise when we reached eviction night:  Jozea has left the building.  Am I convinced his confidence is real?  I’d say that I’m around 70% believing that he believes it, with 30% of me thinking it’s an act as that kind of arrogance GUARANTEES you’re getting airtime.

So What Happened in Episode 4? 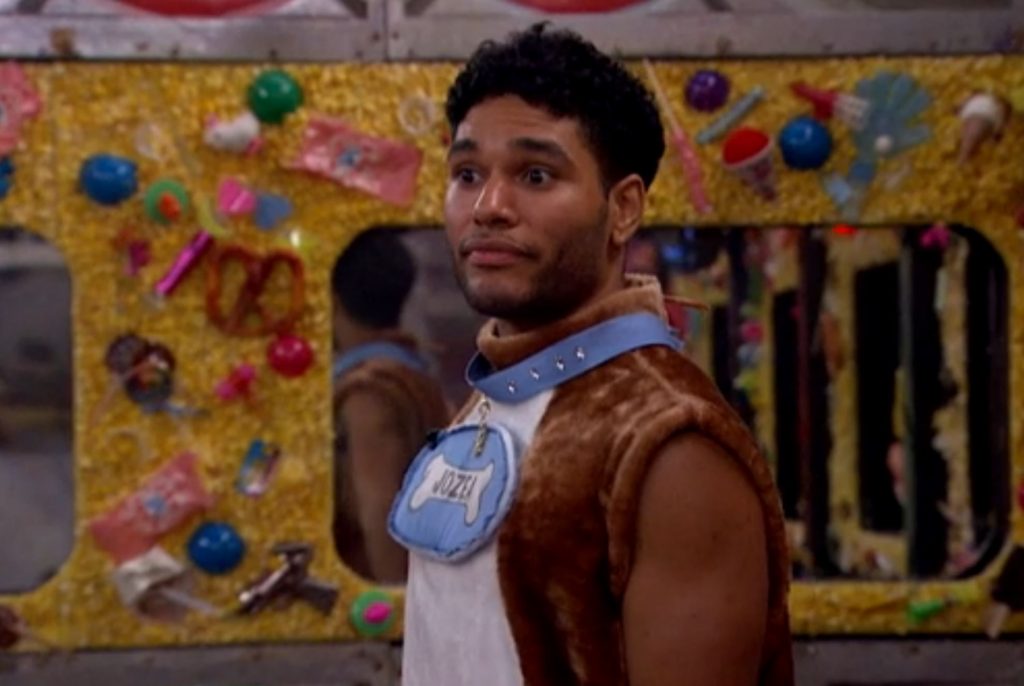 Well, we got a ridiculous house meeting in which Jozea proclaimed how in control of the house his side was, in front of a crowd that at least half was totally not in his sway.  But hey, you do you.  His target is now Paulie, as Jozea’s observational powers are tuned into the fact that Jozea is a rat.  Or something.  I really don’t even know or care, just that Jozea’s observational insights leave quite a bit to be desired.  Quite a bit.

And Who Won the Veto? 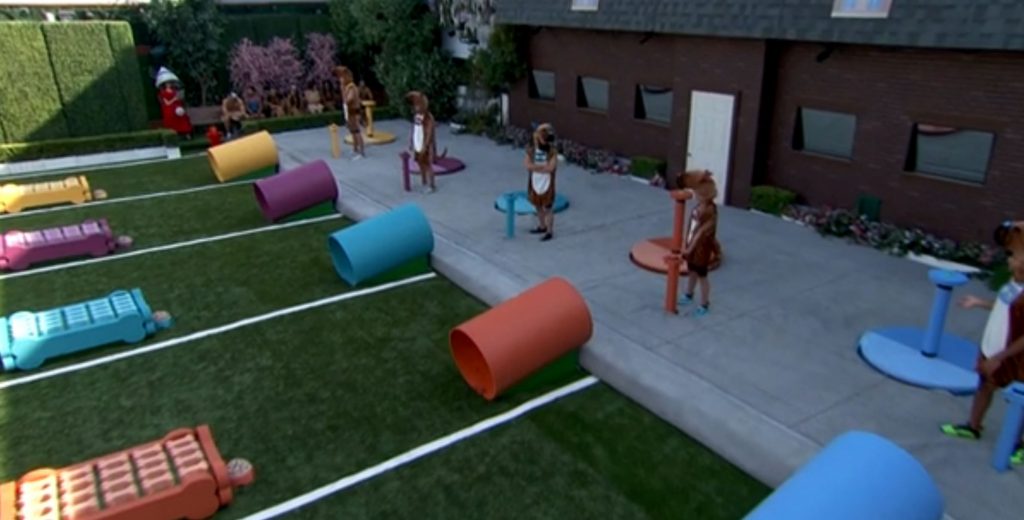 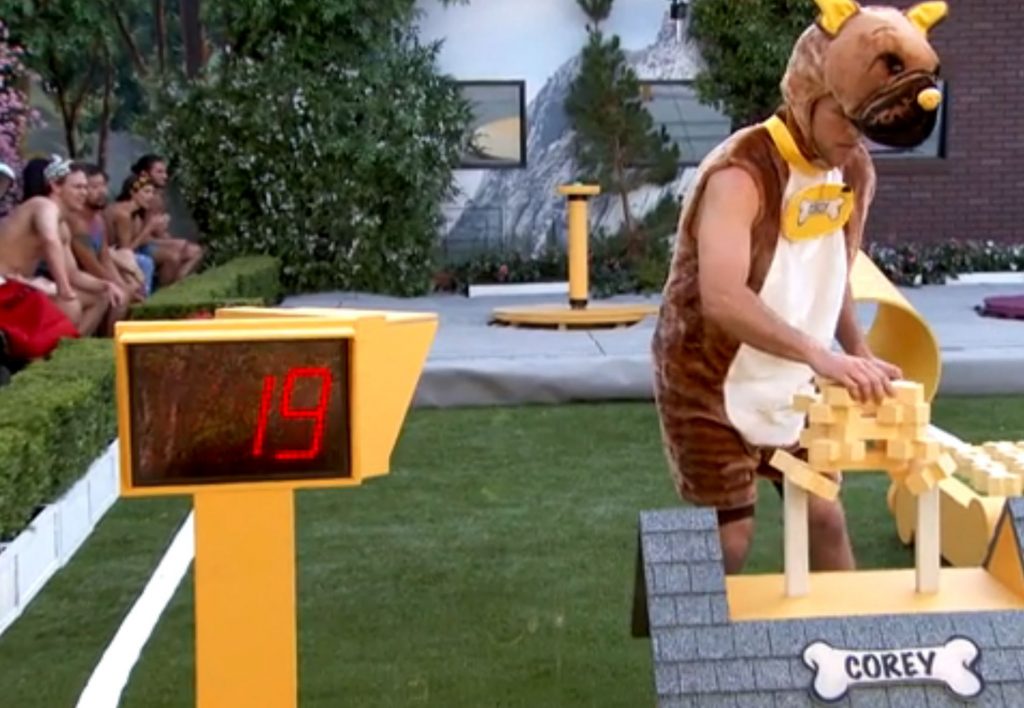 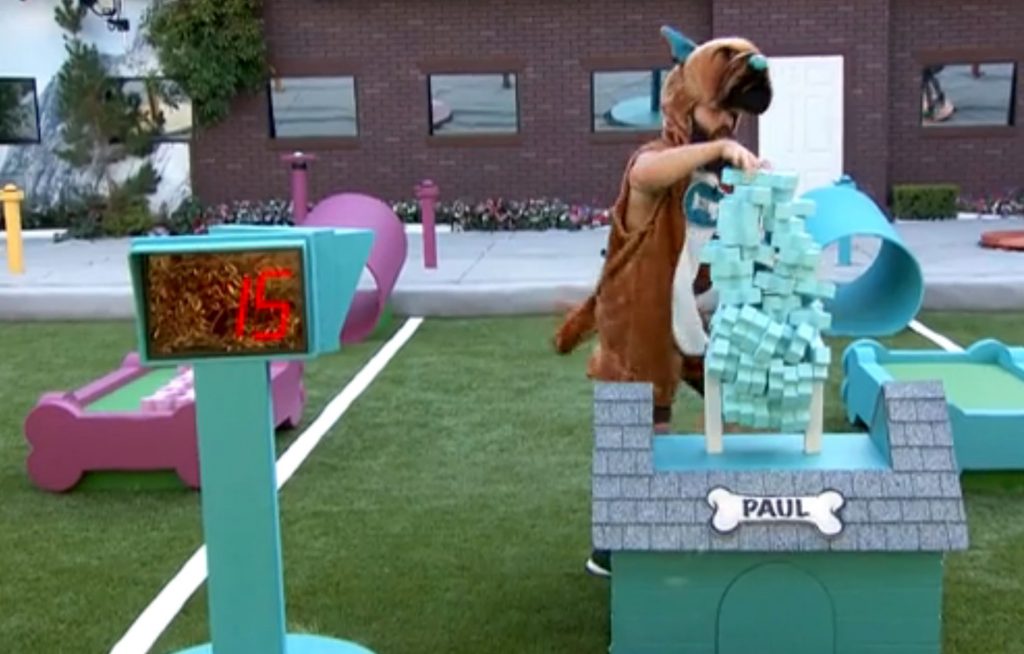 The houseguests who were playing – still just 6, but with Nicole pulling the names of 2 people only, and if either of those names are of a nominee, they get to choose who will play – were dressed up as dogs, and after spinning around 15 times, dizzily run over to the doghouse and stack a ton of bones.  Make sure to go back and reset the timer though or else you’re eliminated.  Nobody seemed to fall prey to that this time. In the end, Paul figured he’d just smash his bones into the two poles to form a base, and sure enough, that caveman way worked.  Paul wins Veto and gets himself off the block! 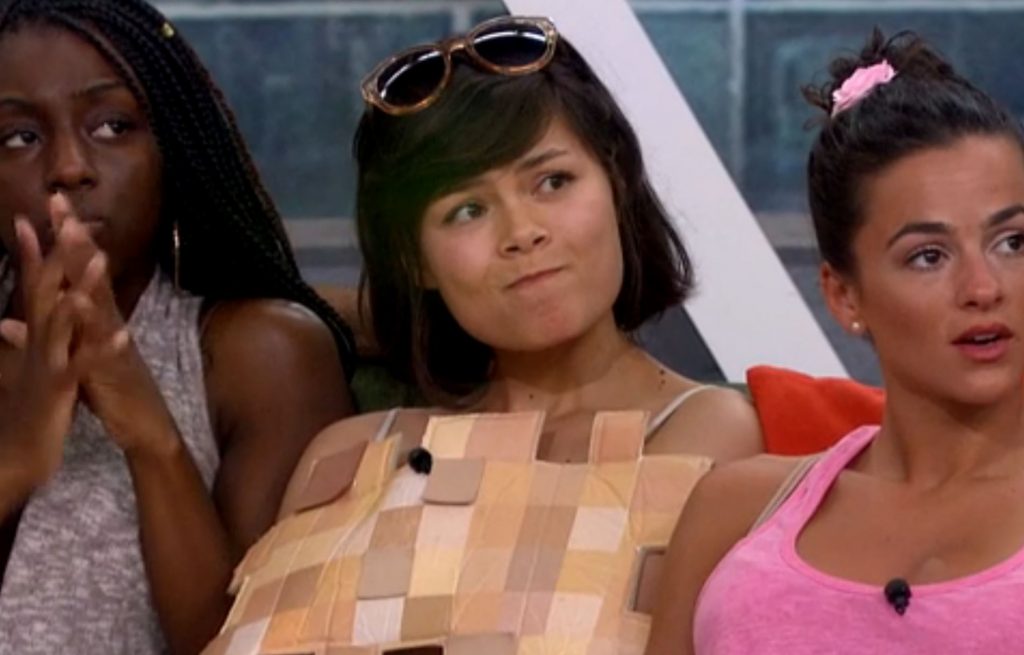 Miss Bridgette here, who I actually kind of like, ended up the only person that Frank, the Roadkill Winner, could realistically nominate, as the others he could choose from were all in 8-Pack.  Bridgette also had a bit of baggage too, as during that house meeting above, the Spy Girls got it in their head to have Bridgette go be a spy in the HoH room while Natalie & Bronte attended the meeting.  But then they stupidly tell the house meeting that Bridgette is up there spying for them…and that’s said in front of Zakiyah, DaVonne, and James.  So yeah, Bridgette’s allies accidentally and unknowingly threw her under the bus.  Frank tells us it was only due to the numbers, which I hope is true, but Bridgette needs to play carefully the next few episodes.

Bring on the First Eviction Episode! 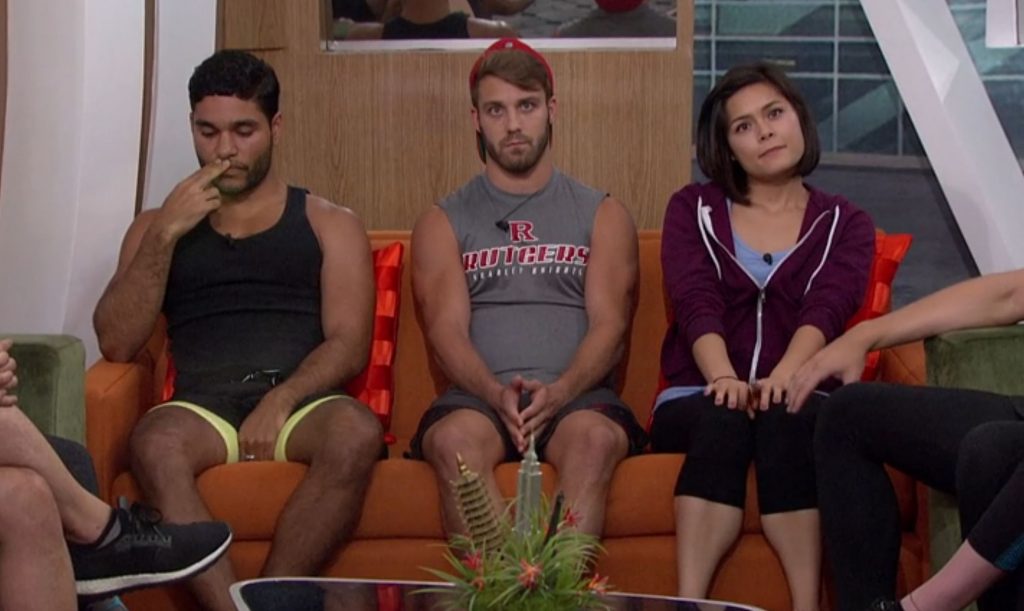 These three are the first to be under the gun for a Live Eviction Episode, and the result seems to be a foregone conclusion.  But First, we end up learning more around Jozea’s amazing intuition, his insincere bonding session with Nicole, and more about DaVonne’s mistrust of Bridgette. 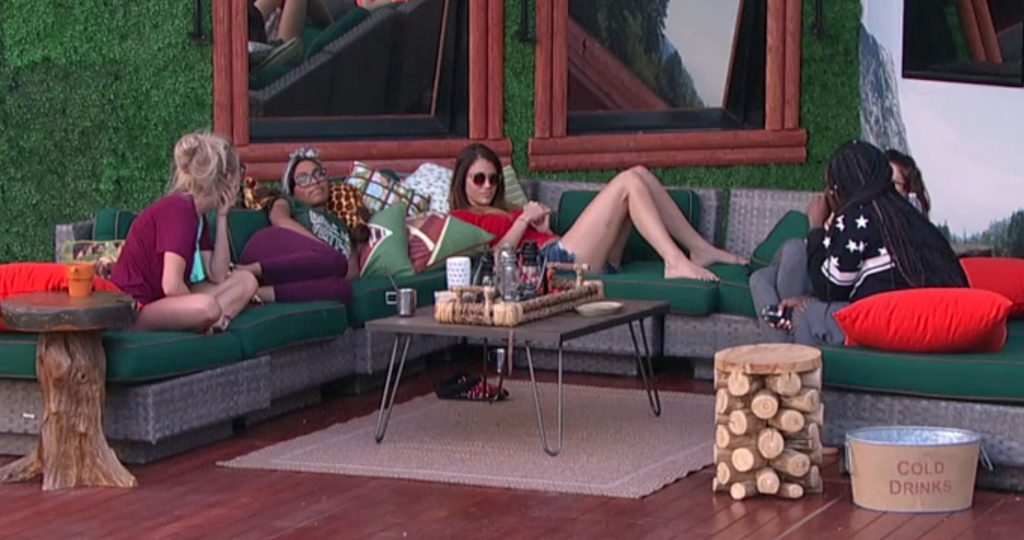 There’s also a moment in which the 5 women of the 8-Pack discuss that they need an internal women’s alliance, and so the Fatal5 is born. All claim that they’re not going to be distracted by any of the men within the house, so let’s see if that’s some bullshit as it sure sounds like it!  Nah, I kid.  I think all of them realize Corey plays for the other team, and the others are cute but possibly the worst examples of millennials (<–says the proud Gen Y-er).

I don’t even know what was going through Paul’s head, but through a long pointless series of events, including Victor mansplaining everything to Natalie, and James chilling with the Girls, Paul flips the fuck out when James orders, jokingly mind you, Paul to leave the bedroom as it’s Girls Night.  Paul literally gets upset about this.  LITERALLY.  Seriously, eff this guy.  He’s the worst and that beard causes rage spasms in me. 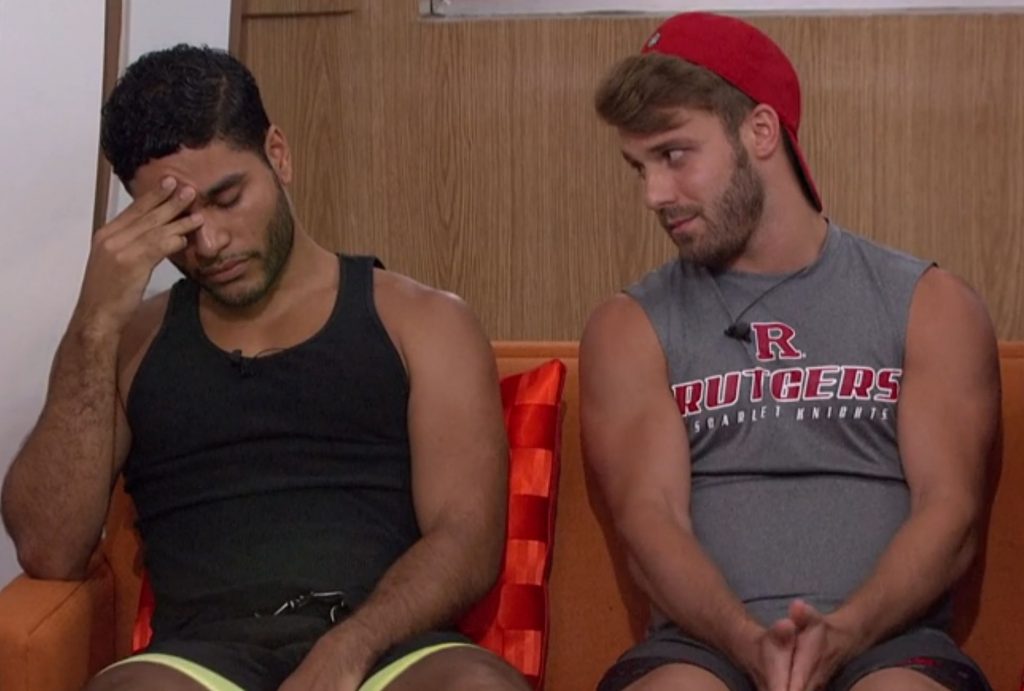 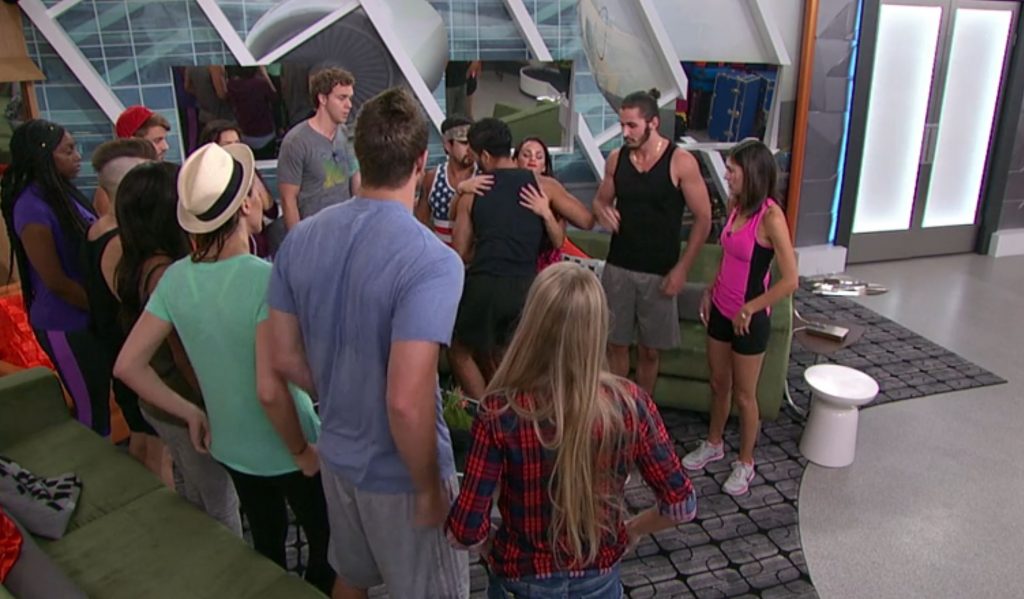 IN a completely unsurprising vote of 7 – 4, with 0 for Bridgette, Jozea is voted out.

I kind of love Paulie’s glare at Jozea even before the reveal of who actually received the votes was announced.  He’s like, bitch, you know it’s you getting evicted.  In a true dick move, Jozea leaves by giving everyone a perfunctory hug and says absolutely nothing. 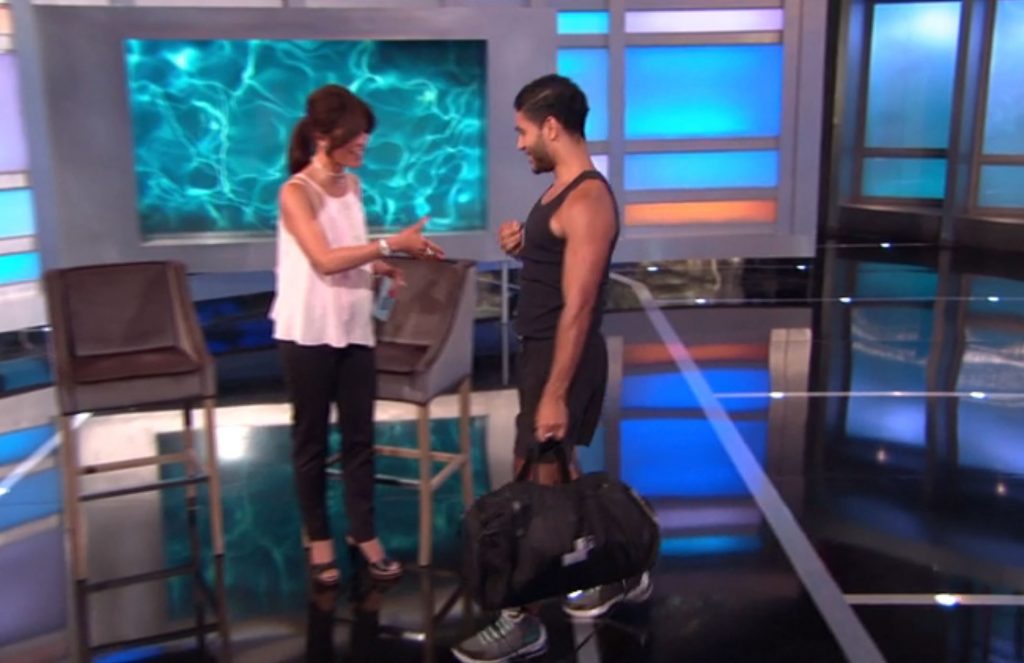 Out with Julie, he claims that he is so truthful that he just couldn’t say anything while leaving.  Even more amusingly, he knows exactly who betrayed him:  Natalie.  Mind you, Natalie voted to evict Paulie.  This guy is utterly fucking clueless.   Is stupid too strong a word?  Nah.  Of course, we’re not done with Jozea, or Glenn for that matter, as ANOTHER FUCKING TWIST IS REVEALED:

So yeah, Big Brother is borrowing from its network sibling Survivor and utilizing the concept of Redemption Island, in which each evicted houseguest has the chance to return, but to do so, they have to win a competition with the newest evicted houseguest.  So up first will be Glenn vs Jozea.  Whoever wins that will then wait to compete against the next evicted houseguest, and so on.  Le sigh….I honestly preferred the way that Big Brother had been doing it before with the last 4 houseguests before the jury competing all at once to get back in.  C’est la vie! 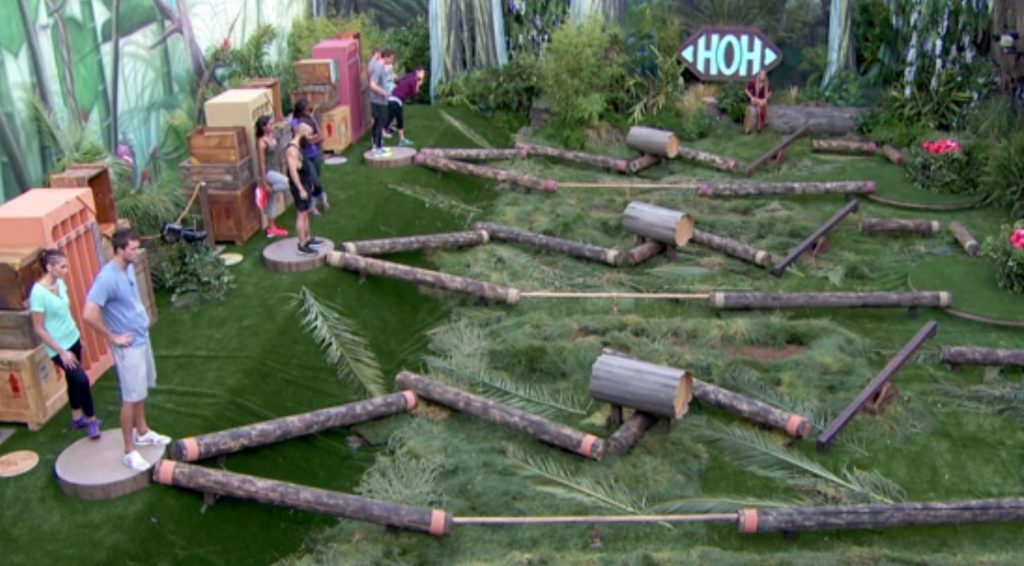 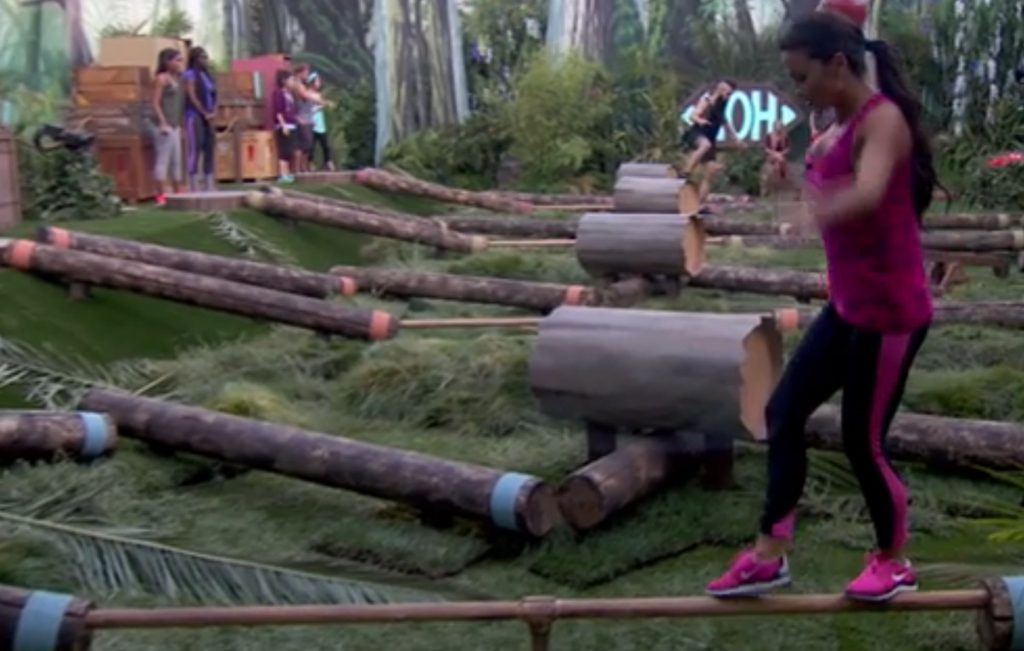 ….well, who knows?  Live Feed watchers, that’s who.  But I’m a show purist, so I get to wait until Sunday night.  It’s another Head of Household challenge that takes much longer than what will fit in a 5-10 minute segment:  the teams are competing again, and they have to cross a series of balanced logs to the other side, collect a “berry”, and bring it back across that same course.  If you fall, you not only lose all the progress in the stack of berries you’ve collected, you’re eliminated. There’s a short, harder path to take, which you see Natalie above trying.  Mere moments after that screenshot, she fell off, eliminated.  Wah wah…. 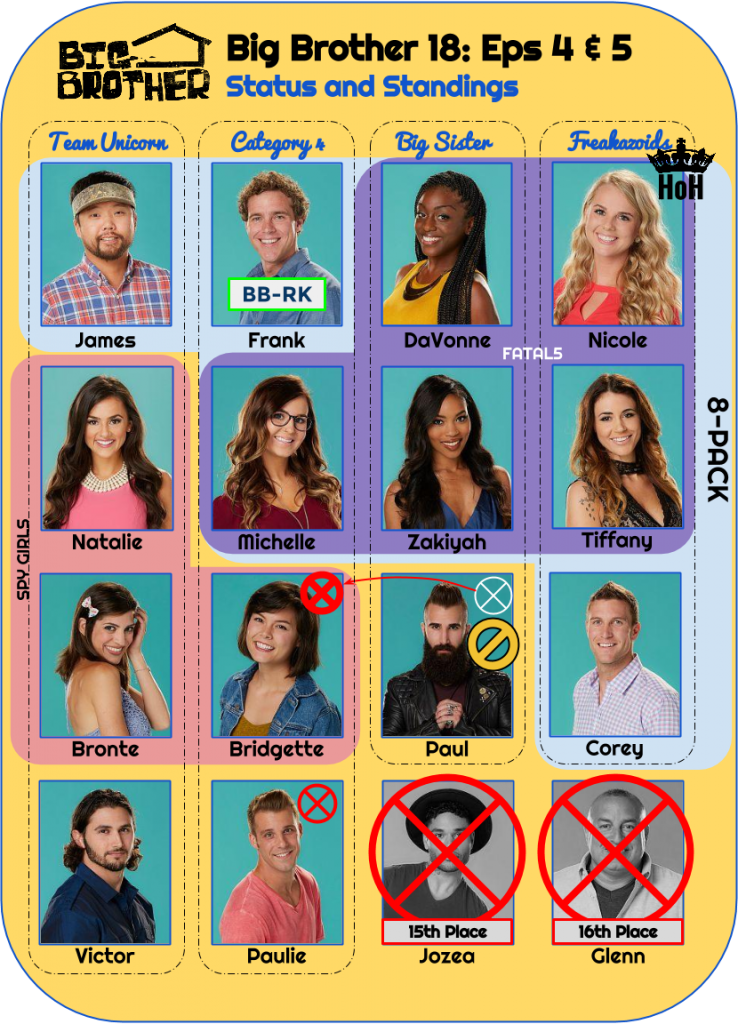 I think the Freakazoids have their work cut out for them to win HoH this week, as they only have two competitors to gather the 40 berries in the competition, vs the other teams who all have at least 3 team members still.  Will be interesting to see who takes power – odds favor that 8-Pack will, but when it comes down to when a team has to internally choose who will be the HoH, that’s when it will get really interesting.  What if a non 8-Pack gets it?

Next, From the Bottom to the Top –>